The Chinese parabolic trough collector manufacturer Inner Mongolia XuChen Energy  has successfully operated a huge solar district heating plant since 2016 in a village near Baotou in Inner Mongolia, an autonomous region of China. Yu Wang, General Manager of XuChen, said that there is growing demand for solar heat from China’s northern provinces thanks to the central government’s green heat policy. The installation in Baotou consists of two fields of parabolic trough collectors, a 22,000 m2 rooftop field on XuChen's factory hall next to the company’s headquarters (left) and a 71,000 m2 system put up at ground level. The 93,000 m2 (65 MWth) SDH plant is the world’s second-largest after Denmark’s Silkeborg (110 MWth) installation but the biggest using concentrating collectors.
Photos: sohu.com, one of China’s major online news portals
“We spent eight years developing the solar concentrating technology for district heating and 59 patents are connected to this development together with more than 100 independent IP rights,” Wang said in a report published on 30 April on cnste.org, the website of the Chinese National Solar Thermal Alliance. XuChen, founded in spring 2016, invested Renminbi (RMB) 1.05 billion, i.e., USD 154.7 million, in putting up headquarters as well as a 50,000 m2 factory for parabolic trough collectors in Baotou’s green industrial park. 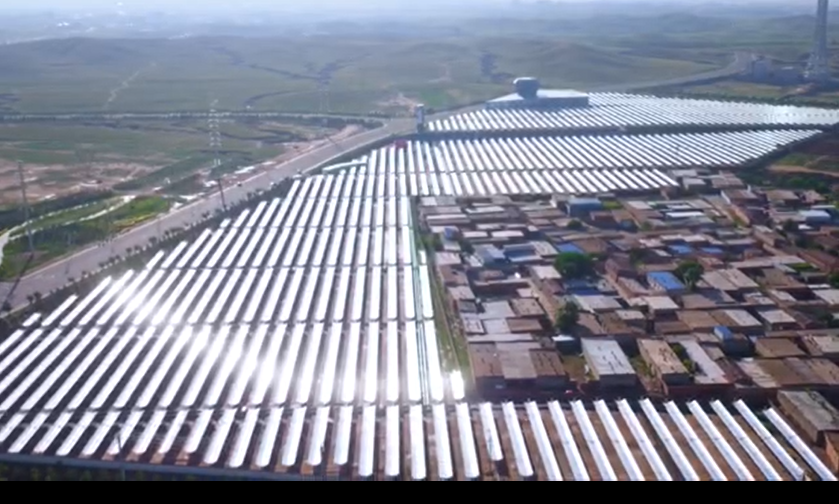 A bird’s eye view of the 71,000 m2 parabolic trough solar system installed on the ground near Baotou, Inner Mongolia, China.  Photo: XuChen
The 93,000 m2 solar plant is part of the government’s green heat policy to improve air quality in China’s northern provinces and phase out coal boilers. This policy is part of the overall trend to improve social living conditions and provide affordable housing which is summarized under the slogan “livelihood”- a term created by the Chinese government.
Wang confirmed that the installation of the solar plant in Baotou is the first livelihood project introducing solar space heating to the region. “The government has completely taken over the RMB 0.55 billion in capital costs for the solar field, including the storage tank and the newly built heat network,” Wang explained in an interview with solarthermalworld.org. This 100 % public subsidy was what prompted XuCheng's investment in a collector factory in the same city.
He added that only one person is needed in the central control room of the solar thermal plant in Baotou. Another employee is in charge of operating the drone that monitors mirror performance. The drone’s infrared sensors can detect points of thermal imbalance across the field in time, so they can be solved immediately. The mirrors have so far been cleaned by hand, but XuChen has already started working on an automated system. You find technical and financial data about the Baotou project in the table at the end of the article.
Solar heat transported to nearby heat consumers by truck
Wang said that he has observed an increase in solar heat demand from China’s northern provinces. He added that surplus heat generated in summer, when none of the buildings connected to the SDH system require space heating, is transported by truck to nearby consumers, including hotels, swimming pools and spas. As China’s green heat policy requires the phase-out of coal boilers and because heat pumps rack up high electricity bills, purchasing solar heat from Baobou's SDH plant is an economically viable option for those requiring large amounts of heat all year round. 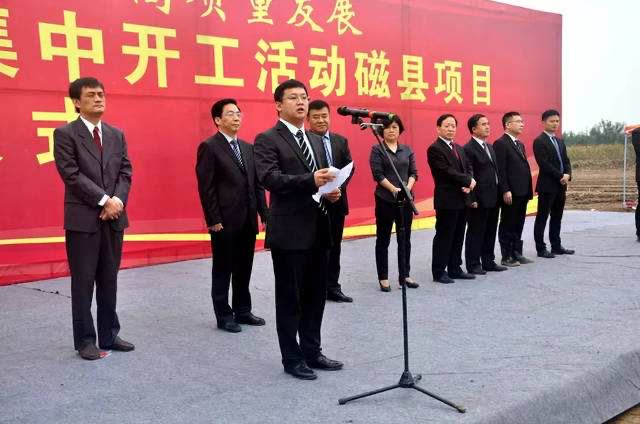 Yu Wang, General Manager of XuChen (front) during the announcement of his second solar district heating plant in the Chinese town of Handan Photo: XuChen
Another huge solar district heating system is currently being built by XuChen in Handan, in the north of China. According to Wang, this plant will provide heat to a new all-weather, four season ecotourism vacation and leisure park. Due to the green heat policy of the government the construction of the leisure park would not have been possible without a source of clean energy for heating, in this case provided by SDH. “Our investment will support the development of new urbanisation and modern tourism and will service industries in Han Dan City”, says Wang.
Technical and financial data on the SDH plant in Baotou. Source: XuCheng
Sources for this article include a WeChat interview with Mr Yu Wang and the following news reports:
https://www.solarthermalworld.org/news/second-winter-75000-m2-sdh-heatin... from April 2018
http://www.cnste.org/html/jiaodian/2018/0810/3615.html from August 2018
https://www.sohu.com/a/304541878_120093798 from March 2019
News
District Heating
Finance and Incentives
China
Inner Mongolia
parabolic trough collector
Silkeborg
Solar Heat for Cities
Inner Mongolia XuChen Energy