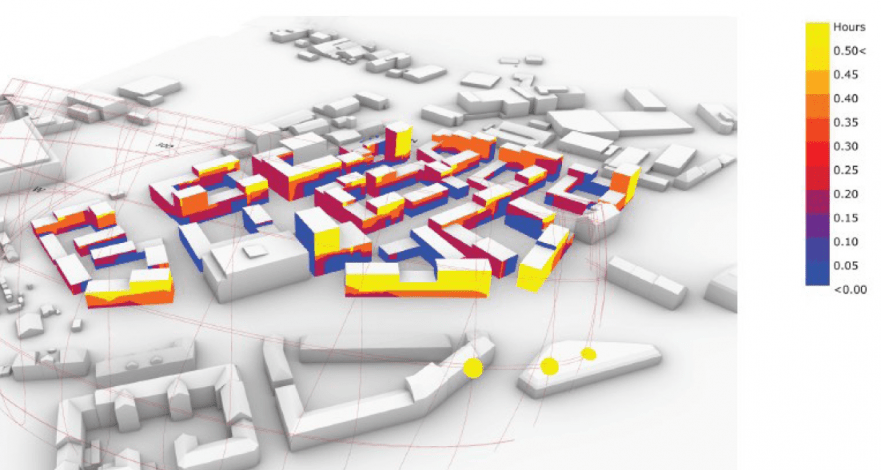 Experts working on the Solar Neighborhood Planning project have created workflow stories to find out which tools urban planners use and what problems they encounter while doing so. The image above is taken from a Norwegian workflow story. It shows a simulation of sunlight patterns during morning hours in a new neighbourhood where inner courtyards should have access to direct sunlight at least 50 % of the time. The project of developing the new research method is led by Jouri Kanters, of Lund University, Sweden, and Martin Thebault, of the University Savoie Mont-Blanc – INES, France, and is part of IEA Solar Heating and Cooling Task 63, Solar Neighborhood Planning. The project members are now aiming to publish, in 2022, a report that includes several such workflow stories, plus a list of tools and a description of the most relevant national indicators in solar neighbourhood planning.
Chart: Rambøll Norge AS
“With the help of workflow stories, we can demonstrate how commercial and non-commercial players have been using tools – mostly digital simulation tools – in the planning phase of a project,” explained Kanters. “Each describing a single project, the stories illustrate mainly how tools were used and what they helped to achieve.” The researchers then note down the lessons learned from every one of those stories.
The data embedded in the workflows was gathered by sending out standardised questionnaires. Task 63 researchers based in different corners of the globe contacted companies or individuals who they knew had worked on relevant projects in the field of solar neighbourhood planning and asked them to take part in the survey. “Usually some back-and-forth exchanges were necessary to gather all the data and complete a story,” said Kanters. Currently, there are 10 stories about projects in Canada, Denmark, France, Italy, Norway, Sweden and Switzerland.
Most workflow stories describe projects early in the planning phase. For example, the Norwegian case study mentioned above focuses on an architectural design competition where Rambøll Norge, a global consultancy, was tasked with evaluating a total of four submissions.
The objective of the analysis was to figure out which of the four proposals had found the best way to make use of solar energy by considering four key parameters: view out of window, sunlight hours on facades, annual solar radiation and acoustics. The most important lesson learned from this story was that the process of preparing the model for the analysis takes more time than the analysis itself.
The challenge of balancing different indicators
When identifying tools, the Task 63 research group relies on the work done by members of Task 51, which ran from May 2013 to April 2017. Chapter 4A of the report Approaches, Methods and Tools for Solar Energy in Urban Planning published by the prior task in August 2018 (download) was the first to detail a number of simulation tools. The authors of that report also underlined how difficult it often is to balance different aspects of solar urban planning, such as environmental issues, energy efficiency, daylight availability, thermal comfort and active solar use. Simulation tools are frequently employed in a specific order or combination that will have the computer calculate these key factors simultaneously.

Workflow showing the different stages of a study and the tools used in each stage. The tools will the assessed in detail in the forthcoming Task 63 publication.
Chart: Task 63
Fælledby – a Danish neighbourhood set to house 7,000 residents and foster a harmonious relationship between nature and the built development – is a good example of how tools can help strike the right balance between competing needs. The architects involved in the project wanted to optimise three key performance indicators: solar coverage as it relates to facades, access to views and daylight access. All analyses were performed using the Rhino/Grasshopper program so they can be integrated with the architects’ workflow. Daylight access, in this project, meant how many hours of sunlight the facades receives. The analysis of views was concerned with the distance to nature (in metres). The lesson learned from this workflow story was that the tools used during the project took account of multiple indicators, making it easier in the planning process to make the right decisions.