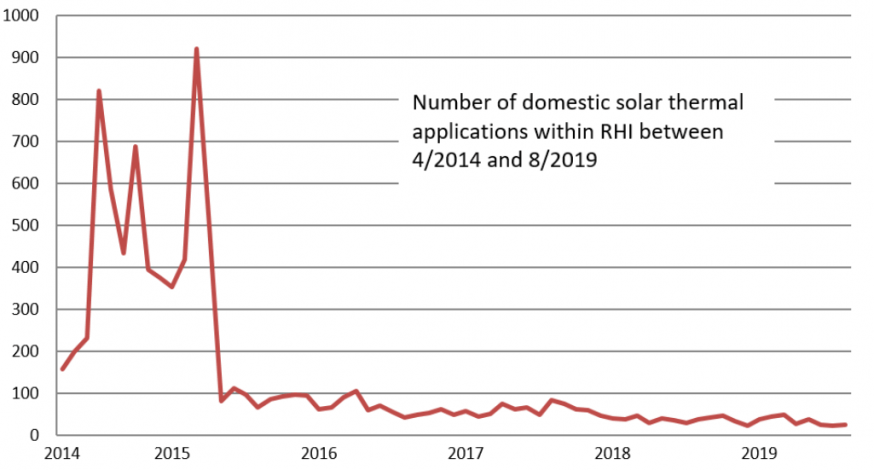 The British Renewable Heat Incentive (RHI) for homeowners was a successful programme. Between 2014 and 2019, in total 47,641 homes received funding for renewable heating systems. After a good start with high demand for solar thermal solutions in 2014 and 2015 the number of applications declined dramatically, although residential solar water heaters are a profitable investment (see case study below). During 2019, only 268 homeowners applied for subsidy for a solar water heating system. Solar space heating is not eligible for RHI funding. There are several factors contributing to the drastic decline, as the statement of Gemma Stanley, Senior Policy Analyst of the British Solar Trade Association, shows. For the news about the non-domestic RHI, please click here.
Source: Ofgem
Stanley first of all emphasises the dominance of the PV technology: “Both the Government subsidy support through the feed in tariff and the global reductions in costs rapidly grew the solar PV market in the UK.” But she also sees the limitation to solar hot water solutions as a reason for the dropping interest: “Other non-solar renewables gained market share from the RHI, because technologies such as heat pumps and biomass boilers are able to contribute to the decarbonisation of space and water heating.” The third reason mentioned by Stanley are “challenges from planning regulations faced by solar thermal as well as some designs seen across Europe not being suitable for the pitched roofs across the UK.”
Space heating was excluded from the RHI, because there was no agreeable way to calculate space heating contribution at the start of the programme 2014. A methodology has been released in draft recently as part of the SAP Calculations required for any newly built dwelling in the UK. “But the process to get it into the RHI regulations would take so long, so it is unlikely it will be implemented before the scheme closes in March 2021,” assumes Grant Feasey, Senior Design Engineer at the British solar thermal system supplier AES Solar.
Overall RHI statistics since the start of the subsidy scheme
The clear winning technology of the domestic RHI was heat pumps with the two categories covering 71 % of applications.  The next best group was biomass boilers with 20 % of applications. Solar water heaters ranked third with 4,030 applications, 8 % of the total. 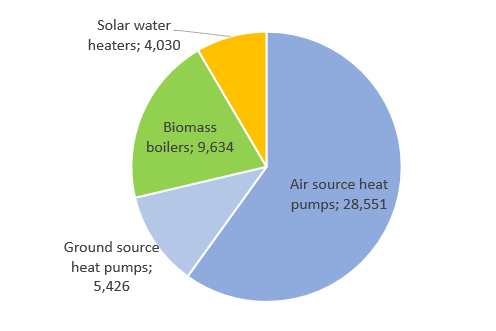 Number of domestic RHI applications April 2014 to August 2019 (Total 47,641). Both charts do not include applications from Northern Ireland
Source: Ofgem
Solar water heaters pay off in seven years
The British family Davidson is one of the beneficiaries of the domestic RHI. Their 5 m2 solar hot water system with an installation price of GBP 3,680 pays off in only seven years, thanks to RHI funding and savings on their oil bill. The family will receive in total 2,516 GBP, thanks to the RHI tariff of 0.2109 GBP/kWh paid over seven years for a deemed yield that is calculated using the MCS method (see table below). 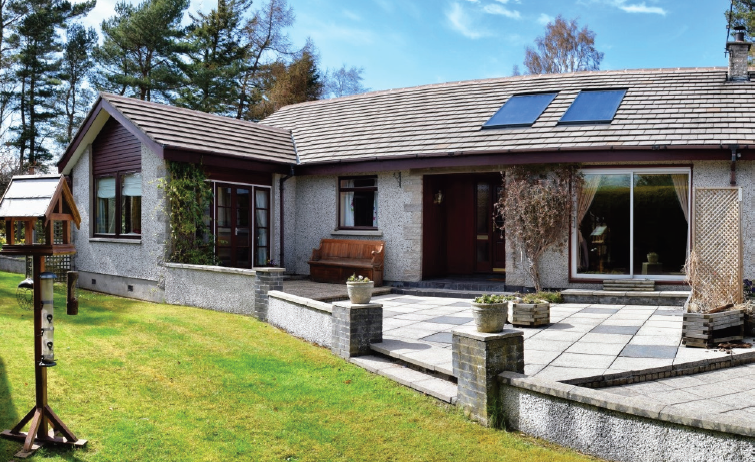