ed and successful policies should be promoted – which is why the Southern African Solar Thermal Training and Demonstration Initiative (SOLTRAIN) should be implemented in West Africa as well. Since 2009, the programme has helped train about 2,150 people during 80 courses and install 187 solar thermal systems in the five partner countries Lesotho, Mozambique, Namibia, South Africa and Zimbabwe. The coordinator, Austrian organisation AEE INTEC, and the implementing body, ECREEE – ECOWAS Regional Centre for Renewable Energy and Energy Efficiency based in Cabo Verde, have now launched a similar four-year training and demonstration programme, SOLtrain West Africa, to increase SWH numbers in five additional countries: Burkina Faso, Cabo Verde, Ghana, Nigeria and Senegal.

The development agencies of Austria (ADA) and Spain (AECID) have been funding the new programme, which began with a two-day workshop in Cabo Verde in June 2014. The consortium also includes the French National Institute of Solar Energy, INES, for trainings in the the project’s French-speaking countries in West Africa.

Despite high demand for heat and the region’s abundant solar resources, the use of solar thermal technologies is still extremely rare in ECOWAS countries (Economic Community of West African States). To analyse the status quo of solar thermal mitigation in the region, one of the first actions of SOLtrain West Africa was to publish Market Reports on Solar Thermal Water Heating and Drying of Agricultural Products for the five nations (see the attached documents). Based on a template from AEE INTEC, local partners conducted surveys at national level to gather information on the countries’ number of solar water heating systems in operation, on importers, on the political framework as well as the technologies used. The major findings of the survey in Ghana, Cabo Verde and Nigeria are described below.

Ghana: Solar drying is a widely used application, and most of the systems in operation were manufactured locally. Still, there have been no standards yet on design and construction.
Photos taken from the attached Ghana market study

Of the three countries, Ghana is the one where the use of solar water heaters has been the most widespread: The authors of one of the partners of SOLtrain West Africa, the Department of Energy Systems Engineering of the Koforidua Polytechnic in Ghana, estimated that the Ghana’s total installed capacity had been 1,455 m² (1,018 kWth) by July 2015, with the majority of SWH systems having been installed in hotels. For example, a 54 m² collector field at the Royal Senchi Resort in the town of Akosombo in south-east Ghana preheats cold water before it enters an LPG boiler. HPW Service Company in Adeiso, southern Ghana, dries fruit and vegetables by solar energy when the temperature is high enough; otherwise, the expected temperature level is achieved using diesel or biogas. Altogether, the authors list 22 pumped SWH systems with a total collector area of 908 m² and 17 – usually smaller – thermosiphon systems with 129 m² in total.

Ghana has not yet had a manufacturer of solar water heaters operating in the country. More than half of the installed solar collector capacity were imported from China, although the authors also found systems which were shipped from Australia, Germany, Israel or Turkey. 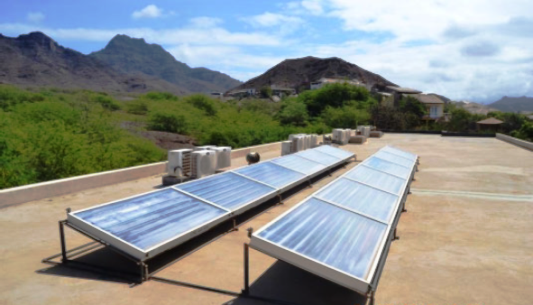 Unlike Ghana, Cabo Verde is not focused on solar thermal use in agricultural drying, but mainly employs water-based systems in the tourism and residential sector. A market survey by the Department of Engineering and Marine Science of the University of Cabo Verde found that the country had no manufacturers of collectors either, but in contrast to Ghana, systems had been imported primarily from Europe. Conversely, Chinese vacuum tube systems played only a minor role. Based on the weight statistics by customs authorities, Cabo Verde imported 1,183 m² (828 kWth) between 2002 and 2013, assuming that a 200-litre system with a gross collector area of 2.5 m² weighs 150 kg.

Nigeria is lagging far behind Ghana and Cabo Verde in terms of market penetration. The group of authors from the Solar Thermal Unit of the National Centre for Energy Research and Development at the University of Nigeria Nsukka said that a 2013 survey on solar water heating in homes, schools, hospitals and hotels “revealed shocking results of nearly complete unawareness of solar thermal technology among the target group“. The estimated total installed capacity of 200 m² is fairly negligible in a country with a population of more than 170 million. The market report also emphasised that solar drying systems were still unpopular with farmers.