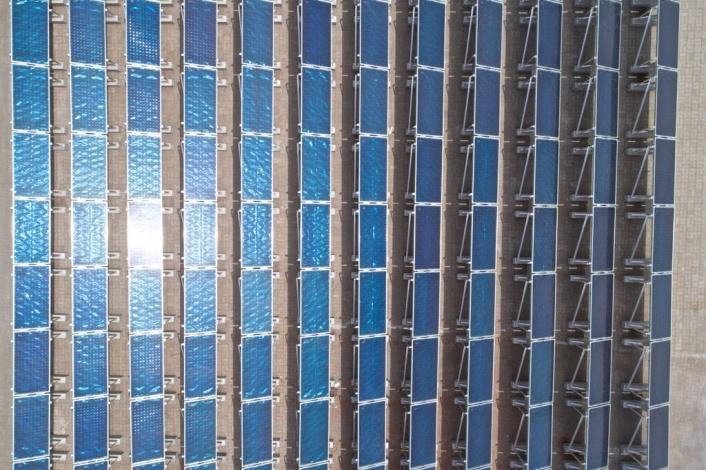 UAE-based Ocean Rubber Factory has been satisfied with its new 240 m² solar process heat system made by Swiss supplier TVP Solar. Mounted on the company’s factory roof in the northern emirate of Ras Al Khaimah, the installation not only produces heat at 180 °C, but it does so at a significantly lower cost than the diesel boilers operating at the same site. TVP Solar makes special high-vacuum flat plate collectors named MT-Power, of which it has developed the fourth generation.
Photo: TPV Solar
The entire system was commissioned in September 2018 after installation took five weeks only. The solar heat is supplied through a heat exchanger to ensure trouble-free and continuous operation of the rubber plant. Pressurised water at 185 °C flows into a buffer tank filled with diathermic oil. This oil is then used as a transfer fluid in a second heat exchanger to lead thermal energy into the hot oil circuit of the factory.
In early February, TVP Solar and Ocean Rubber Factory (ORF) published a joint press release detailing the first three months of operation from 12 September to 14 December, during the country’s ‘winter’ season, when there are 33 % fewer sun hours per day. It also quotes ORF’s Managing Director, Faisal Noordeen, as having said that the “TVP system provided 27 % of the average daily energy we need in our rubber factory in Ras Al Khaimah,” without having to clean the solar field. He expects the solar contribution to increase to 40 % during the hot and dry summer months.
In the press release, diesel-based heat costs are reported to average 0.073 USD/kWh per year, while solar delivers thermal energy at 0.035 USD/kWh. 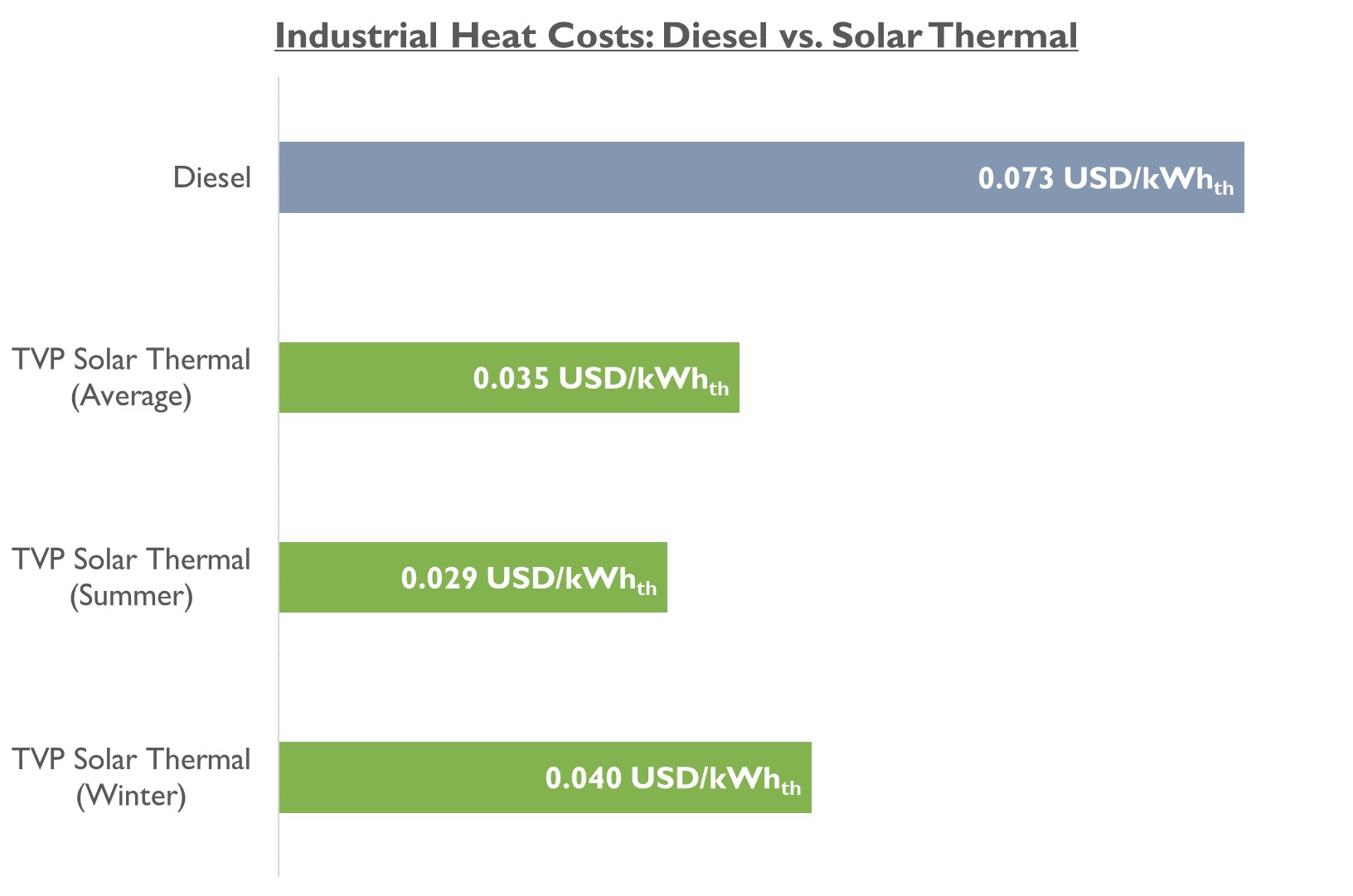 Heat prices for diesel and solar at Ocean Rubber Factory. These prices have been calculated based on a 25-year lifetime of the solar system, with average diesel boiler efficiency set to 75 %. The cost of loans for the investment in solar was not part of the calculation.
Source: TVP Solar
Monitoring confirms great efficiency at high temperatures
MT-Power collectors have been optimised for producing heat at above 100 °C, made possible by the vacuum insulation of the units. The core innovation of these collectors is the seal between the 5 mm thick glass pane and the metal frame to keep the high vacuum inside the panel during the lifetime of the product. Therefore, the collector efficiency curve is much flatter than for air collectors, reaching about 40 % at 200 °C. Output data from the last quarter of 2018 confirmed that daily efficiency was, on average, 37 % when providing pressurised hot water at 180 °C (see the chart below). Average daily output reached 2 kWh/m² at an irradiation level of 5.7 kWh per m² and day.

“We reliably deliver heat over 25 years at a much lower cost than diesel and can do so everywhere in the sun-rich Gulf region,” said Guglielmo Cioni, Vice President Business Development at TVP Solar. “We believe the ORF reference system, considering proven energy output and end-user impact, will increase demand for industrial solar process heat installations not only in this region but the world.” The business has a strong project pipeline when it comes to industrial solar heat (SHIP) and expects to sign delivery contracts for up to eight SHIP projects this year.
TVP also installed its first commercial solar cooling plant at the new headquarters of an international logistics company named Agility Logistics, based in Sulaibiya, Kuwait. The system, which was brought into operation in January 2017, runs a double-effect absorption chiller at 180 °C to generate cold air to meet daytime cooling demand. This solar cooling plant reached 70 % of the total point score needed to gain Kuwait’s LEED Silver certification.
Organisations mentioned in this article:
www.tvpsolar.com
www.orf.ae
News
Process Heat
UAE
Switzerland
SHIP
de-risking
TVP Solar
Ocean Rubber Factory