Californian start-up Sunvapor has found its first solar steam customer for a demonstration system with the Green Parabolic Trough Collector technology developed in-house. In April 2017, it announced that it had gone into partnership with Horizon Nut to install a 50-kW solar process heat installation at the latter’s pistachio processing facility in Firebaugh. Sunvapor’s CEO and founder Philip Gleckman confirmed that the system is scheduled to come online at the end of this year. The fluid heated to 230 °C is said to be used for pasteurising, blanching and roasting pistachios. Horizon Nut is a growers’ cooperative which collectively processes about 70 % of the pistachios in California. The photo shows a laboratory prototype of the parabolic trough collector with the wooden mounting system. This prototype was used to validate the structural model.
Photo: Sunvapor
Sunvapor has received two grants for its demonstration project, one from the California Sustainable Energy Entrepreneur Development Initiative and one from the Department of Energy’s research funding through SunShot. “We are very eager to find a renewable alternative to fossil fuels, so that we can produce more and save money. Expanding production, which is limited by emissions, is important to the economy of a region that suffers from low employment,” Andrew Howe, Director of Operations and General Manager of Horizon Nut, was quoted as saying in a Sunvapor press release.
The intent of the green parabolic trough collector development was to cut costs. The support structure of the trough was made of wood instead of the more frequently used steel, almost slashing trough costs in half, Sunvapor said. The collector itself consists of a glass mirror and a receiver, whose supplier has yet to be announced publicly. “Pacific Gas and Electric charges his big natural gas consumers USD 9 per million BTU. We can sell our solar steam for USD 6 per million BTU,” Gleckman said. 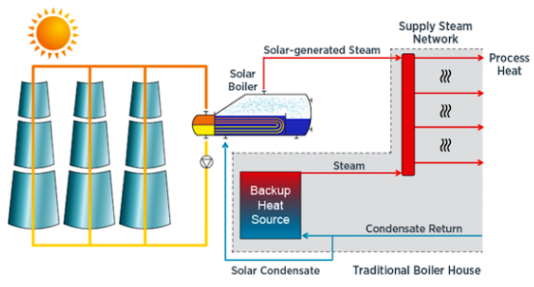 Diagram of Horizon Nut demonstration system
Chart: Sunvapor
The plans for the first demonstration system at Horizon Nut include a 50-kW module with an aperture area of 72 m² ready for scale-up. The solar steam will be fed into the company’s network parallel to the energy from the gas backup boilers. The manufacturer’s specifications show the parabolic trough collector delivering steam at above 250 °C and 40 bars.
Sunvapor was founded in 2014 and is headquartered in Livermore, California. Its aim is to offer solar heat contracts to the food and food processing industry in order to replace fossil fuels in heating and cooling applications.
Websites of companies mentioned in this article:
http://www.sunvapor.net/index.html
http://www.horizonnut.com/
News
Process Heat
Finance and Incentives
USA
California
parabolic trough collectors
SunShot initiative
Sunvapor
Horizon Nut
California Sustainable Energy Entrepreneur Development Initiative
Pacific Gas and Electric Company