The American Solar Heating & Cooling Alliance will offer sector-related conferences at both of its major upcoming events in the USA: Intersolar in San Francisco on 12 July and Solar Power International in Las Vegas on 12 September. The SHC Alliance, a division of the Solar Energy Industries Association, is organising and sponsoring these events to assess the tremendous impact solar thermal could have on energy and national gas consumption across the country. There is still little demand for solar thermal technologies and the industry will need to invest considerable effort in communicating their advantages. Gross additions in 2015 for glazed collectors have been estimated at 170,000 m² – a 7 % drop compared to the previous year. Unglazed collectors increased 1 % last year, bringing the total up to 846,000 m². These US market figures were provided by Les Nelson, a member of the SHC Council.
The Intersolar North America symposium on 12 July from 10 a.m. to 5 p.m. will hand over the floor to a number of well-known solar heat specialists, who will share their in-depth knowledge of several different industry segments: hotels, multi-family houses, schools and universities, and commercial pool heating (see the attached programme). A special highlight will be the section on financing, during which Adam Boucher, CEO of Promise Energy, and William Guiney, President of Artic Solar, are going to talk about finance options and performance contracts. The keynote speaker on policy will be Alex Padilla, the California Secretary of State, who has been a champion of renewable energy and climate change mitigation throughout his career.
The second SHC symposium organised by the SHC Alliance is scheduled to take place on Monday, 12 September, from 1 to 4.30 p.m. and is said to address business innovations, strategic opportunities and advancements in technology as well as financing. The complete programme is not yet available.
California Solar Initiative to be extended until 2027
The California Solar Initiative (CSI) is the main driver of the state’s solar thermal market. After attractive funding opportunities for commercial pool heating pushed application figures to 1,312 in the peak year of 2014, the number was back to 687 systems in 2015. Among the entire 3,964 applications submitted since the start of the programme, commercial pool heating has been responsible for 19 % of all applications within a relatively short period of time (see the chart below).
Statistics of CSI – Solar Thermal Program
Source: http://www.csithermalstats.org/
The good news is that the Committee on Utilities and Commerce has passed the 2460 assembly bill, which would grant the CSI solar thermal programme a ten-year extension until 2027 with a budget of USD 1 billion. The budget of the first eight years was USD 351 million. “The bill was introduced partly as a reaction to the massive natural gas leak at the Aliso Canyon facility near the Porter Ranch subdivision at the end of 2015, where an estimated 97,100 metric tons of methane were released into the atmosphere over a four-month period,” Ed Murray, Chair of the SHC Alliance, was quoted as saying in one of the alliance’s conference calls earlier this year. It will be several months before a final decision on the bill is reached. AB 2460 has passed the California Assembly and is now making its way through the Californian Senate. The legislative session lasts until the end of August, after which the governor has until 20 September to sign or veto the bill. 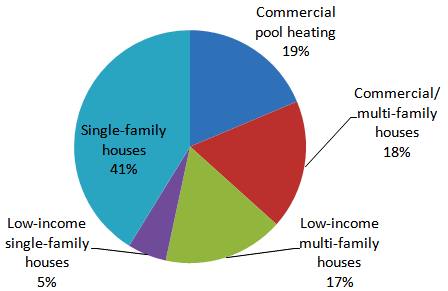 Industry segment shares among the 3,964 applications submitted between May 2010 and May 2016
Source: http://www.csithermalstats.org/
Online registration for SHC session at Intersolar (scroll down and select exhibition programme at 10 am on Tuesday):  SHC Alliance Symposium; Solar Heating & Cooling: The Other Solar Technology
Websites of institutions and events mentioned in this article:
https://www.intersolar.us
http://www.solarpowerinternational.com/
http://www.seia.org/us-solar-heating-cooling-shc-alliance