Researchers at the US National Renewable Energy Laboratory (NREL) have observed a renewed interest in solar process heat applications in recent years, mainly thanks to “the improvement and proliferation of solar collectors for electricity generation and the development of sophisticated solar collector modelling tools.” Last year, two of those researchers – Parthiv Kurup and Craig Turchi – conducted a study on the potential of solar process heat provided by concentrating collector technologies in California (see the attached document). This study, entitled Initial Investigation into the Potential of CSP Industrial Process Heat for the Southwest United States, was supported by the US Department of Energy and was published in November 2015. The chart taken from it shows the annual energy use of steam in industry segments which utilise the largest amount of gas. The study’s authors found the temperature range from about 120 to 220 °C to be of great interest, as it enables the use of concentrating optics and of water as the heat transfer fluid.
Chart: Page 22 of the attached study
The two researchers used the following parameters to analyse the potential of solar process heat: 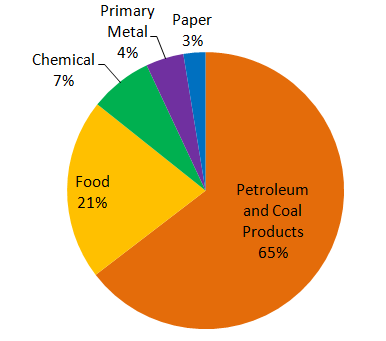 Potential of solar process heat displacing natural gas consumption by direct process heating and boilers in selected industry segments in California. The total adds up to 48 TWhth /year and is based on the 2010 Manufacturing Energy Consumption Survey.
Chart: Table 10 of the attached study
Petroleum and coal products manufacturing show the greatest potential
First, the authors confirmed that California’s direct normal irradiation was not a limiting factor in the top-down analysis. They estimated the state´s demand in the five major gas-consuming industry segments – food, paper, petroleum, chemical, and primary metals – to add up to 48 TWhth per year (see the chart on the left). Based on the study’s average DNI of 5 kWh/m2 per day in California and an average 40 % efficiency of a concentrating collector aperture area, the specific solar yield would result in 730 kWh/m2a. The substitution of 48 TWh of gas would therefore require 66 million m2 of concentrating collectors. Although the industry segments’ huge natural gas consumption promises the greatest opportunities for solar process heat, the authors admit that the offset of electricity “may present favourable economics” as well. 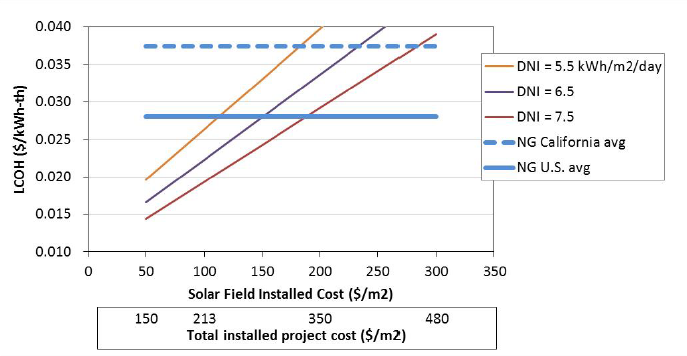 Estimated Levelised Costs of Heat (LCOH) based on different solar resources and fields compared to the ones of natural gas at US and Californian industrial prices. The assumptions for calculating the LCOH: 20-year life, 2.5 % inflation, 13 % discount rate and 50 % debt-equity ratio.
Source: Page 33 of the attached study / methodology from p. 64
Based on an NREL survey among collector manufacturers on the solar process heat market, the study’s authors estimate a turnkey system price of about 200 USD/m2, including installation. This price would make solar thermal energy competitive to heat generated by natural gas if based on an average price of 0.037 USD/kWh in California and a solar DNI of about 6 kWh or more per square metre and day (see the chart above). The calculation assumes a 20-year economic life and a discount rate / internal rate of return of 13 %.
The Californian gas price average used in the study is from 2014. It factors in a burner efficiency of 80 % and the cost for the burner itself of 200 USD/kWh. The Levelised Cost of Heat (LCOH) estimates do not include any incentives, which are at 0.0034 USD/kWh, if the technology replaces natural gas and are capped at USD 800,000 within the California Solar Initiative. The results suggest that “economic [solar process heat] applications can be found in California at existing solar hardware costs and market gas prices. However, project viability will be strongly dependent on the specific solar project costs – including any incentives – and the specific gas pricing contract in place.”
The authors emphasise that the Californian gas price of 0.0317 USD/kWh has fallen again in 2015 compared to the year prior, which has made it a greater “challenge for solar thermal”.
Website and institutions mentioned in this article:
www.nrel.gov
California Solar Initiative: http://www.csithermalstats.org/