Skip to main content
Sign up for newsletter
Follow us
Advanced search
With 1.9 million m² of collector area newly installed in 2014 (1.33 GWth), Turkey was again the second-largest solar thermal market after China last year. The share of vacuum tube collectors had increased significantly over the years, but stagnated in 2014 at 44 % of total market volume. The annual market statistic in the chart has been provided by Kutay Ülke, Export Manager of Ezinç Metal, one of the largest solar water heater manufacturers in Turkey. The annual study Solar Heat Worldwide from Austrian research institute AEE INTEC uses these industry-based figures for Turkey in all of its latest issues. There are no regular official statistics – neither by the government, nor by GÜNDER, the Turkish Section of the International Solar Energy Society, whose members make up a big part of the national solar thermal industry. In its current publications on the Turkish solar thermal market, GÜNDER uses a more general estimate of “at least 1.5 million m² of collector area” being produced and installed per year.
Source: Ezinç 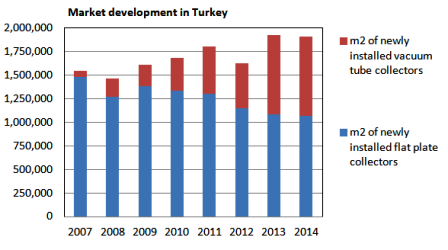 Market insiders in Turkey assume that the share of vacuum tube collectors will stagnate or even decline in 2015, because manufacturers increased prices significantly at the beginning of 2015. Since the Turkish government imposed an import duty on vacuum tubes in July 2011, there have been three large vacuum tube factories using Chinese production technology: Solarsan, Aslanlar Metal and Lara Solar.
According to the above-mentioned annual statistics from Ezinç, the market volume of flat plate collectors remained stable in 2014. The current survey of the world map of collector manufacturers, which was published in the magazine Sun & Wind Energy in November 2015, resulted in an average drop of 9 % in production volume in 2014 compared to the previous year when it came to the five flat plate collector manufacturers which took part in both surveys. This statistic, however, includes domestic as well as international sales.
During the world map survey, the General Manager of Solarsan, Cem Sapan, confirmed that the company’s manufacturing capacity in 2014 was 10,000 vacuum tubes per day, and around 3 million a year. At Aslanlar Metal, daily manufacturing capacity amounted to 12, 000 units, as Sales Manager Osman Bilen emphasised. Extrapolated to a year, this would mean 4.4 million tubes. The third manufacturer, Lara Solar, cited trade secrets as the reason for not replying to any questions, but is said to have around the size of its competitors, which means a manufacturing capacity of 3 to 4 million tubes annually. Generally, real production output is significantly lower than the above mentioned manufacturing capacities.
Even so there is a certain overcapacity or room for exports in Turkey, since Ezinç’s annual market statistics include 838,280 m² of vacuum tube collector area newly installed in Turkey in 2014, which Ezinç says would require 6.5 million tubes.
The industry forecasts stagnating or slightly growing market in 2016

When asked about the forecast for the market development in 2016, almost half of the relevant solar thermal manufacturers assume a slight growth of up to 10 %. This matches the result of the aforementioned world map survey carried out by German agency solrico in September/October 2015, in which 13 Turkish solar thermal system suppliers participated. Two of the company heads predicted a declining market in 2016. Critical factors were the more or less stagnating construction industry and the expansion of the gas grid to villages, which have been an important sales channel for solar water heaters so far.
Websites of companies or institutions mentioned in the article:
www.ezinc.com
www.solrico.com
www.larasolar.com/en/
www.aslanlarkollektor.com/
www.solarsan.com.tr/en
News
Turkey
Germany
Austria
market development
Solar Heat Worldwide
Solrico
Ezinc Metal San
Gunder
AEE Intec
Solarsan
Aslanlar Metal Sanayi
Lara Solar