Labels and trademarks should give the end-consumer a clear feedback on the quality and performance of the labelled product. Currently there are three labels available for solar products or solar assisted heating systems in Europe, so there is an increasing need to explain the differences to market players as well as customers. The chart above shows the two voluntary collector labels Solergy (left) and Solar Keymark (centre top) as well as the EU Energy Efficiency label (right) which is obligatory for water, space and combi heaters under the Energy Labelling (ELD) and the Ecodesign (EDD) Directives  since September 2015.
The first label to be introduced on the market was Solar Keymark. It was developed by the European industry association Solar Heat Europe/ESTIF in co-operation with the European Committee for Standardisation (CEN) in the year 2003. It is a voluntary quality assurance label for collectors and solar thermal systems vouching for compliance with relevant European standards. The Solar Keymark is used in Europe and increasingly recognised worldwide. 463 companies from 41 countries received certificates for their products, totalling 1,394 for collectors and systems up to June 2018.
The label is a simple logo. For the end-customer it does not immediately give any detailed information about the energy performance of the product. However a professional market player can consult the online Solar Keymark database which includes the certification data sheets of all certified products and systems in the market. These data sheets include the annual collector unit output for three different solar radiation sites in Europe (Stockholm, Davos, Würzburg and Athens) and three different collector temperatures (25, 50 and 75 °C). In the latest version of the data sheet the specific output per m² gross area is given as well.
Solar Keymark certificates are required (or accepted as equivalent to national certificates) in many European countries, often in connection with support schemes. This facilitates companies to access different markets so reducing costs, time and administrative requirements especially when developing new products. 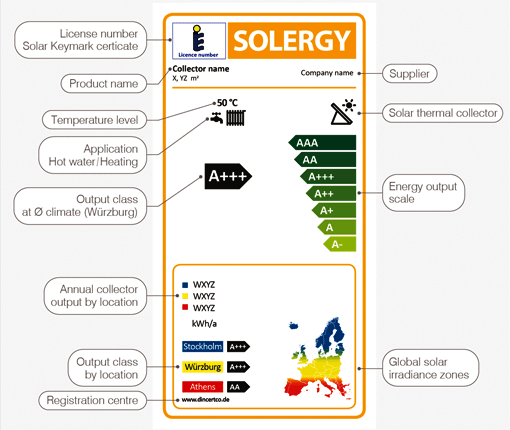 Explanation of the Solergy label
Source: Solar Heating Initiative
To give the purchasers a clearer picture of the performance of a chosen collector, the German consultant Stefan Abrecht developed a methodology that resulted in the launch of the Solergy label 2015. Since January 2016 the German certification body DIN CERTCO from TÜV Rheinland officially issues the voluntary label and currently 22 manufacturers use this label for their end-consumer communication. These companies are based in Germany, Italy, France, Poland, Netherlands, Austria, Turkey and China. A network of industry and other supporting organisations called Solar Heating Initiative promotes the label which is now also available for solar producers in Australia and New Zealand.
Solargy classifies the collector on the performance data mentioned on the same Solar Keymark certification data sheet as described above. According to the annual energy output the collector is categorised in one of seven ‘A’-categories. “With the output classification we show how well the irradiated solar energy is used for heat generation,” explains Abrecht. “But we are not interested in discrediting individual technologies, but in offering the most technically suitable and environmentally friendly heating system for each application.”
Solar Heating Initiative is an autonomous network supported by the partner organisations. Solar Heat Europe decided in their general assembly in 2015 that they would not support the Solergy label and there has not been any change in their position since then. “One of the concerns was that Solergy only considered the collector and not the solar system. Furthermore, there were concerns regarding way the performance was assessed and how different performances would be ranked in the proposed classes,” explains Pedro Dias, Secretary General of Solar Heat Europe/ESTF.
Energy Labelling of the EU
Dias maintains strong support of the so called package label within the Energy Labelling Directive and the Ecodesign Directive. “It is very important that consumers have more information on the performance of the system,” Dias explains. The energy labelling of the European Commission with its categories A+++ to G is mandatory since 2015 for newly installed space heating boilers, combination heaters, water heaters and tanks. As in other segments like refrigerators, light bulbs etc. the label applies to the supply side and aims at phasing out certain non-effective products from the market.
In the case of space and water heaters, an additional concept has been introduced to the product label that of the package label (or system label), which assesses the combined performance of several components of a space or water heating system.  The installer creates the individual label for the system, for instance calculating the combined effect of a solar system with a chosen boiler and a controller, and hands over the label to the client when installing the system. This calculation can be done manually but is more likely done with software or using online tools, such as the ones provided by the Labelpack A+ project, supported by the European Commission.
Collectors or stand-alone thermosiphon systems cannot be labelled in the current EU labelling scope. Solar thermal systems are integrated only in combination with a boiler or heat pump constituting part of the referred package (or system) label. This approach is seen by some in the industry as a disadvantage for solar thermal. “Solar devices are not considered as heat generators within the EU labelling, but only as efficiency technology to the boiler similar like a control or a storage tank,” explains Abrecht who sees it as an unfair situation. The overall EU labelling directive is currently under revision, with the solar thermal sector working towards improving the representation of solar thermal. See also news on the revision of the EU labelling scheme.
Watch the video regarding the package label:
https://www.youtube.com/watch?v=I3jEbeQRXrk&feature=youtu.be
Organisations mentioned in the article:
DIN Certco:  http://www.dincertco.tuv.com/?locale=en
ErP review:
http://www.ecoboiler-review.eu/documents.htm
http://www.ecohotwater-review.eu/documents.htm
Solar Heating Initiative: http://solar-heating-initiative.com/
Solar Heat Europe (ESTIF):  http://www.solarheateurope.eu
This text was written by Chris Laughton, Founder and Managing Director of the Solar Design Company in Great Britain.
News
Certification
Standards
Europe
UK
Australia
New Zealand
Sweden
Germany
Greece
Switzerland
Austria
Italy
France
Poland
Netherlands
Turkey
China
energy labelling
Solergy
Solar Keymark
EU Energy Efficiency label
ELD
EDD
Labelpack A+ project
Solar Design Company
Solar Heat Europe
CEN
Stefan Abrecht
DIN Certco
TÜV Rheinland
Solar Heating Initiative