In his keynote speech at Eurosun 2020, Dr Andreas Hauer talked about the different roles that heat storage could play as part of a whole systems approach to energy policy. Thermal energy storage, or TES, can reduce energy consumers’ dependence on volatile heat sources and align heat with power demand in multiple ways. Hauer, who works at the Bavarian Centre for Applied Energy Research – ZAE Bayern, and Dr Wim van Helden, of AEE INTEC, Austria, co-chaired IEA SHC research platform Material and Component Development for Thermal Energy Storage from January 2017 to December 2019.
Chart: Dr Andreas Hauer
Hauer began his presentation by underlining that heat demand would make up an increasing share of final energy consumption until 2050, pointing to the energy economics research institute FfE’s 2050 forecast for Germany as a typical example of energy use patterns in a developed country (see the chart below). As far back as 2005, heat accounted for 59 % of final energy consumption, followed by the transport sector (about 30 %) and the electricity market (around 10 %).
“The first thing you will see when looking at these estimates is a remarkable reduction in final energy demand from 9,747 PJ to 6,000 PJ. And yet, the share of heat will grow over the next 30 years,” said Hauer. He added that in 2050, demand for heat will be almost 5 times as high as for electricity, hence there is an “urgent need to make use of all thermal energy storage technologies at our disposal.” 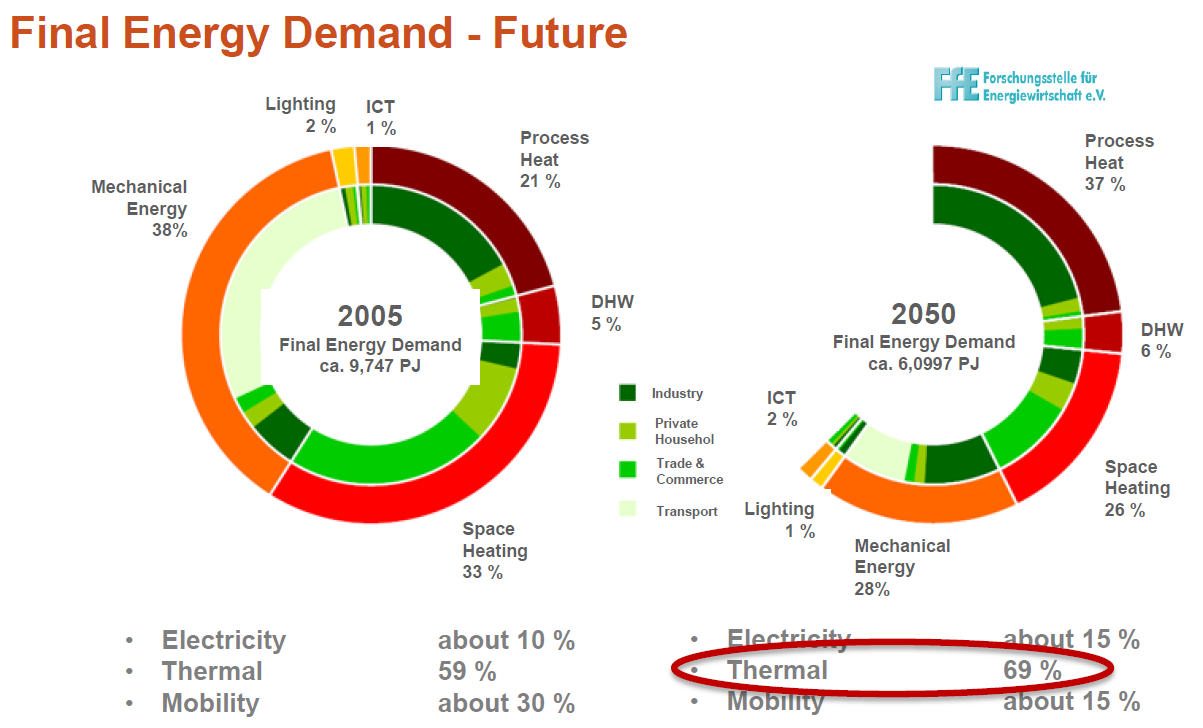 The share of heat in the final energy consumption will increase to 69 % by 2050 Source: FfE
Hauer then listed four different types of source-storage-consumer configurations, shown in the graphic at the top:

Maximum acceptable storage capacity costs for different consumers Source: ZAE Bayern
During the last part of his presentation, Hauer introduced a simple tool that shows the economics of thermal energy storage systems for three different types of users, namely enthusiasts (green), building owners (blue) and manufacturers (red). The requirement was that the cost of energy supplied by the storage system did not exceed the price for energy sold on the market. The y-axis therefore shows the acceptable maximum storage capacity costs (in EUR/kWh), which were calculated by using the interest rate on the cost of capital, the intended payback period for a given consumer, reference energy costs, and the number of storage cycles a year. According to these calculations, the annual number of storage cycles (shown on the x-axis) has the largest impact on cost-effectiveness.
How is this double-logarithmic chart to be read? “If a seasonal storage system with one cycle a year is used in the building sector, costs must be below 1 EUR/kWh of capacity – and, indeed, Denmark’s large sensible heat storage systems are in the range of 0.4 EUR/kWh,” explained Hauer. If the application is industrial and requires a daily storage cycle, costs range from 20 EUR/kWh to 30 EUR/kWh of capacity, according to the chart. Consequently, if the annual number of storage cycles is high enough, all thermal energy storage technologies will become cost competitive.
The Material and Component Development for Thermal Energy Storage research group was a joint project by two IEA Technology Collaboration Programmes (TCPs), Energy Storage and Solar Heating and Cooling.
Organisations mentioned in this article:
https://task58.iea-shc.org/
https://www.ffe.de/ (in German)
https://www.aee-intec.at/index.php?params=&lang=en
https://en.zae-bayern.de/
https://pcoconvin.eventsair.com/eurosun20/
News
Heat Storage
Solar Thermal Power
Germany
sector integration
Eurosun
ZAE Bayern
AEE Intec