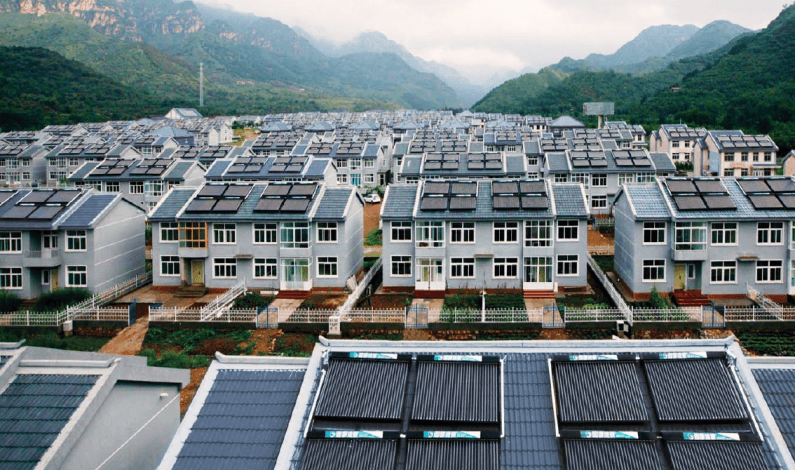 How well will evacuated tube collectors made in China hold up after prolonged exposure to sunlight? The answer to this question can be found in a new report, titled Development of Accelerated Ageing Tests for Evacuated Tube Collectors. Created by the China Academy of Building Research (CABR) as part of the IEA Solar Heating and Cooling Programme’s Task 57, it was published in November 2018 and summarises the findings from exposing evacuated tube collectors (ETCs) to sunlight for between 88 and 241 days (see the attached document), with the aim of developing accelerated ageing methods. The photo shows a section of the housing development in the Pinggu District in the east part of Beijing, where 285 homes have been equipped with solar space heating.
Photo: Sunrain
The long-term reliability of evacuated tube collectors is becoming an increasingly important issue in China, in particular because it can have great influence over the risks associated with investing in large solar fields. China is the world’s biggest solar thermal market: Nearly 480 million m² of collectors (336 GWth) have been installed in the country so far and 90 % of them are evacuated tube ones.
Four technologies in the spotlight
The report concentrates on what happens to the thermal performance of ETCs which have been exposed to sunlight over a longer period of time, mainly because of irradiation levels and high operating temperatures. Over 100 kits of solar products made by 70 different manufacturers based in one of the following provinces were tested for between 143 days and 241 days, at ambient temperatures ranging from 24.2 °C to 26.7 °C: Beijing, Jiangsu, Guangdong, Shandong and Zhejiang. Collector performance was rated according to Chinese National Standard GB/T 4271 and European one EN 12975-2 before and after accelerated ageing, with units for long-term testing chosen at random.
According to the report, exposure hardens the rubber rings of collectors. As a result, the distance between the tubes and the manifold increases, leading to greater heat loss. Furthermore, the performance of the insulation materials of the manifold drops, due to the high temperatures reached in the tubes during the exposure. 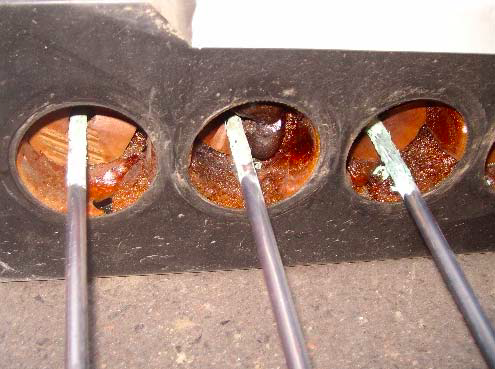 Damaged manifold insulation as a result of long-term exposure
Source: CABR
The National Centre for Quality Supervision and Testing of Solar Heating Systems in Beijing opted for testing three evacuated tube collector technologies typically sold on the Chinese market:
These ETC technologies were compared with flat plate collectorsthroughout 88 days of exposure to sunlight. 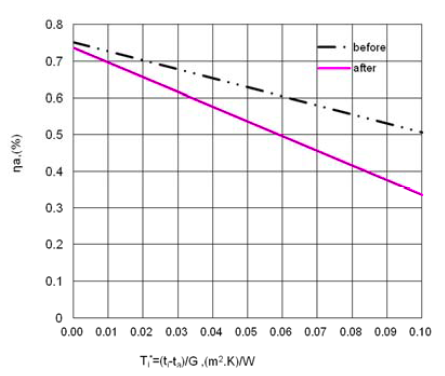 Comparing a glass-metal sealed evacuated tube collector unit before and after exposure indicates a significant drop in performance. The report includes similar graphs for other collector technologies.
Source: Task 57
Post-exposure performance fails standard
Performance coefficients before and after testing. Eta0 represents the starting point of the efficiency curve on the y-axis, while a1 is the initial heat loss coefficient.
Source: Task 57
The results indicate that, especially due to unfavourable heat loss coefficients, output could no longer meet the requirements of the Chinese national standard after the tests (see the table above). Another conclusion is that FPCs seem less affected by exposure to sunlight than ETC technologies. The heat loss coefficient a1 of FPCs increased by around 50 %, while it rose by between 63 % and 235 % in the case of ETCs.
The article was written by Riccardo Battisti, a solar thermal consultant and market researcher working at Ambiente Italia (Rome, Italy).
Organisations mentioned in this article:
IEA SHC Task 57: http://task57.iea-shc.org/