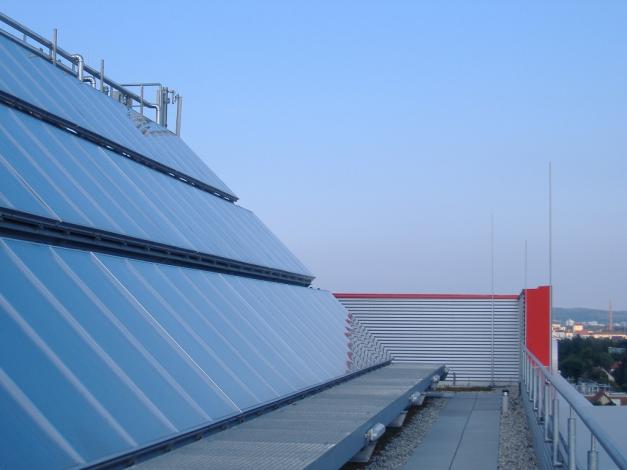 A new scientific paper published in July gives readers an overview of state-of-the-art absorption chillers below 50 kW of cooling capacity. The document, titled Review of small-capacity single-stage continuous absorption systems operating on binary working fluids for cooling: theoretical, experimental and commercial cycles, was written by three researchers who work at the University of Savoie Mont Blanc in France. They analysed and compared chillers using ammonia, water or other substances for cooling, with a focus on the interaction between certain refrigerants and absorbents.
Photo: A solar cooling system on the roof of an office building in Austria (courtesy of Riccardo Battisti)
“Absorption cooling systems are still more expensive than common vapour-compression systems. However, they will be of great import in the near future because operating costs are low if they run on renewables or waste heat,” the researchers explain in the introduction to their paper, adding that “the main advantage of absorption devices over other heat-driven cooling technologies, such as adsorption, desiccant or ejector systems, is their higher coefficient of performance (COP).” In absorption refrigeration, the refrigerant is taken in by another liquid, whereas in adsorption refrigeration, the refrigerant adheres to a solid surface.
Commercially available chillers using water and lithium bromide
After describing a number of prototypes and their stage of development, the paper goes on to list small-capacity absorption chillers that use water as the refrigerant and lithium bromide as the absorbent (H2O-LiBr), plus their specifications (see the table below).
The chillers come in a wide variety of capacities, with some of them having a cooling capacity of only a few kilowatts, which could make them suitable for use in smaller residential units. As for the COPs shown in the product catalogue, they range between 0.6 and slightly more than 0.8.
Buyers should focus on the inlet driving source temperature of the chiller at nominal conditions, as it directly affects the efficiency of any solar thermal installation connected to the cooling unit. Most systems still run at relatively high temperatures of about 90 °C; only two products have operating temperatures of below 80 °C.
Technical specifications of selected H2O-LiBr absorption chillers, as found in product catalogues
Source: A. Altamirano et al. (2019). Review of small-capacity single-stage continuous absorption systems operating on binary working fluids for cooling. International Journal of Refrigeration.
Another table in the paper shows the results from monitoring some of the absorption chillers that are available for sale. “Testing revealed that most systems do not reach the cooling capacities stated in the product catalogues. In some cases, the capacity was 10 % to 25 % lower,” the authors of the paper write at the end.
Many options for combining working fluids
In another key section of the paper, the authors compare different combinations of working fluids. Each of these pairs of refrigerants and absorbents have their own set of benefits and drawbacks. Both have been summarised by the authors in a table, which includes commercially available fluids and products still under development. In the following, only fluids currently available for sale will be listed.
Commercially available combinations of working fluids used in single-stage absorption chillers
Source: A. Altamirano et al. (2019). Review of small-capacity single-stage continuous absorption systems operating on binary working fluids for cooling. International Journal of Refrigeration.
The article was written by Riccardo Battisti, a solar thermal consultant and market researcher working at Ambiente Italia (Rome, Italy).
You can purchase the paper on small-capacity single-stage continuous absorption systems by going to
https://www.sciencedirect.com/science/article/pii/S0140700719302968
Chiller suppliers listed in the table above:
EAW Energieanlagenbau: http://www.eaw-energieanlagenbau.de/home.html (in German)
Jiangsu Huineng: http://www.tynkt.com/en/
Purix: http://www.purix.com/
Thermax : https://www.thermaxglobal.com/
Yazaki: https://www.yazaki-group.com/global/
News
Solar Cooling
Italy
France
absorption chillers
monitoring
working fluids
Ambiente Italia
University of Savoie Mont Blanc
Yazaki
Purix
Thermax
EAW Energieanlagen
Jiangsu Huineng