There couldn’t be a starker contrast between the market development of two renewable heat segments: Whereas Swiss heat pump sales remained at around 18,400 units per year from 2014 to 2016, collector sales dropped significantly from 117,634 m² in 2014 to 66,699 m² last year. Market volume is now below where it was ten years ago and solar water heaters are facing strong competition from heat pumps and photovoltaics (see attached market report in German and French). The annual solar thermal symposium on 8 November in Dübendorf near Zurich will provide an opportunity to discuss alternative applications and technologies.
Source: Swissolar
David Stickelberger, Managing Director of Swissolar, said that heat pumps had been the predominant technology in residential newbuilds in Switzerland and were also used to a significant degree in retrofits. Conversely, demand for solar thermal in single-family homes had dropped considerably over the years. Another hurdle was PV’s lucrative support scheme. “The current upfront investment subsidy of more than 30 % and on-site consumption in combination with a heat pump makes PV systems a profitable option,” said Stickelberger.
Another issue had been the slow implementation of MuKEn – the building energy efficiency standards – at cantonal level. These national standards limit non-renewable heat production to 90 % for retrofits and 80 % in the case of newbuilds. They could be beneficial to increasing the deployment of solar water heaters in multi-family buildings once cantons turn them into local regulations, Stickelberger believes.
There is also some uncertainty surrounding the Harmonised Incentive Model. It will be launched in early 2018 and require cantonal authorities to choose among three options when implementing renewable support schemes. The technology-specific grants that have been common so far will then be only one of those three options. Stickelberger expects most cantons to target retrofits and comprehensive renovation projects. From experience, solar water heaters would rarely be chosen in such general building efficiency schemes. The Swissolar director said that the cantons would most probably wait until at least the beginning of next year to devise subsidy models, as their creation depended on public budget approval for 2018. 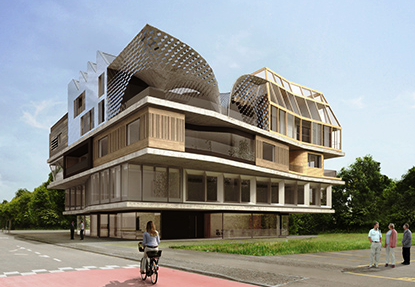 NEST (Next Evolution in Sustainable Building Technologies) centre on the premises of Empa, the Swiss Federal Laboratories for Materials Science and Technology
Image: Empa
The German-language solar thermal conference on 8 November will provide an important chance to discuss alternative technologies and applications and stimulate the market in Switzerland. The speakers will zero in on topics of interest such as multi-family buildings, PV-Thermal products and designs and solar heat for industrial processes. A visit of NEST – Next Evolution in Sustainable Building Technologies (see image) is planned during the lunch break.
Websites of organisations mentioned in this article:
http://www.swissolar.ch/
http://www.swissolar.ch/solarwaerme-tagung-2017/