Crystalline PV modules utilise only 12 to 15 % of the incoming sunlight, while the rest is usually treated as waste heat. Hybrid solar panels, also called PVT elements, will channel this unused low-temperature heat, as shown by a large-scale demonstration plant in Switzerland. The PVT system’s 1,300 m² are used to regenerate a borehole field in a Swiss multi-family housing area. Monitoring data of the system’s first year in operation between August 2014 and July 2015 resulted in an annual thermal yield of 330 kWh/m² in addition to the 163 kWh/m² of electricity produced by the PV modules, according to a statement made by researchers from the Swiss SPF – Institute of Solar Technology earlier this year. The borehole field serves as the energy source for the heat pumps, which supply hot water all-the-year and space heating in winter. Most probably, the recommendations that the SPF researchers made to optimise the system in a paper published in May 2016 will even lead to a higher thermal yield during the installation’s second year.
Photo: SPF Rapperswil
The PVT demonstration plant was set up in the neighbourhood of Oberfeld, a sustainable and car-free housing area in the town of Ostermundigen, near the Swiss city of Bern. The three multi-family buildings, which comply with low-energy standards, have each been equipped with a separate heating system consisting of a heat pump, the borehole field and a PVT installation. These centralised energy supply systems have been operated by regional utility Energie Wasser Bern (EWB).
The PVT unit was manufactured by Swiss PV specialist Meyer Burger. The hybrid modules contain photovoltaic cells in the front and an aluminium absorber in the back, but there is no insulation. The PV module and thermal absorber are simply glued together around the sides. A vacuum between absorber and module ensures that both have contact to each other, in order to transfer the heat from the PV cells to the absorber sheet. To maintain the vacuum, Meyer Burger delivered a separate pneumatic distribution box.
Solar heat to regenerate boreholes to around 20 °C in summer
The researchers from the SPF monitored the energy system of house B with 379 PVT elements (606 m²) and 14 boreholes in order to analyse the electrical and thermal yield of the PVT system as well as identify efficiency gains. According to the PVT element manufacturer the hybrid field has an electric power of 99 kWp and a thermal power of 341 kWth. The researchers measured a satisfactory thermal yield of 330 kWh/m², which was transferred into the boreholes to increase the soil temperature. The borehole temperature dropped as expected to 7-8 °C in February and rose to around 20 °C in summer. 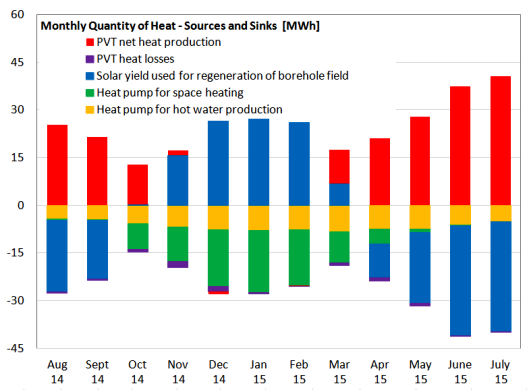 Monthly heat flow measured in house B in Oberfeld: Excess solar heat in summer (red) is used to regenerate the borehole field (blue), which in turn is utilised for hot water production all-the-year (yellow) and space heating in winter (green).
Source: SPF
A reference PV system had been installed on the roof next to the PVT one and had also been connected to an independent inverter. During the first year in operation, both PV installations produced the same number of kilowatt hours, which means that there was no cooling effect from the thermal absorber in the back of the PVT element. The PVT system generated 163.3 kWh/m² and the reference system provided 162.4 kWh/m², resulting in a module efficiency of 13 %.
All in all, the innovative heating system performed well over its first year in operation. However, the researchers still identified two areas for improvement in relation to control strategy:
At present, the operator and the SPF researchers are looking very much forward to the monitoring data gathered during the second year in operation. It will be available this autumn.
Websites of institutions and companies mentioned in this article:
http://www.spf.ch/
http://energysystems.meyerburger.com/en/products/hybrid/
https://www.ewb.ch/
News
District Heating
Switzerland
PVT
SPF Institute for Solar Technology
EWB
Meyer Burger