Skip to main content
Sign up for newsletter
Follow us
Advanced search
“Why is there no solar district heating in Switzerland?” Swiss scientists were asking after their visit to Denmark. They had been investigating the feasibility of solar heat in district heating networks in the St Gallen canton and published a 50-page study this March (see the attached document in German). As it turns out, solar heat could be produced in several networks for 60 to 160 CHF/MWh (50 to 140 EUR/MWh). Assuming plant owners or operators could get an incentive similar to the one for small-scale solar heat systems, it would make several larger ones economically viable. Now, the Swiss-based SPF – Institute of Solar Technology has begun to work with a district heating company on giving the country its first pilot plant. Photo: Ritter
The SPF project started with an analysis of 43 heat networks in St Gallen in east Switzerland. Data provided by Energy Agency St Gallen was used to identify the most promising ones among them. “Many district heating networks get their heat from waste incineration. You can normally rule those out right away, as the cost is about 20 EUR/MWh, incineration will continue throughout summer because of no space for saisonal waste storage, and the temperature in the network is around 120 °C,” said SPF’s Igor Mojic, one of the study’s three authors. Another typical energy source besides waste is wood, for which average cost ranges between 40 and 60 CHF/MWh (35 to 70 EUR/MWh). The researchers also used the available data to estimate heat demand in summer as precisely as possible.
A total of 34 networks made it to the second stage, during which SPF tried to get first-hand information by sending out questionnaires and conducting interviews over the phone. It employed Polysun 9.0 to run model simulations of 17 heat networks. The right plant size was determined by assuming a system met all the demand in summer, which led to solar fractions of 10 to 32 %, depending on the consumer base. The subsequent third stage was used to perform calculations based on real-life data for five district heating networks, namely Thal, Gommiswald, Wattwil, Altstätten and Waldkirch (see the chart below). The underlying assumption was that solar collectors were roof-mounted, as “setting up PV systems on the ground is unthinkable in Switzerland. We were naturally assuming roof space to be used for installing the solar thermal system,” said Mojic. 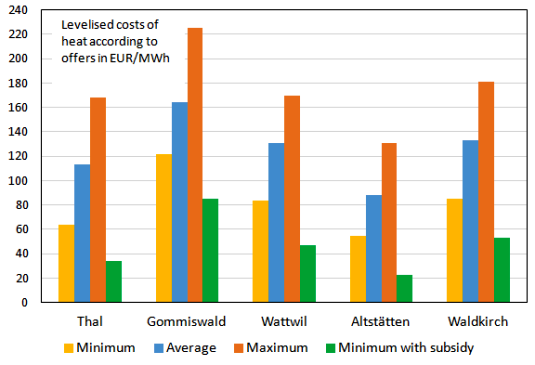 Levelised cost of heat for five selected district heating networks, as per offers by collector manufacturers. Calculations assume a 25-year economic life and a 3 % loan interest rate.
Chart: SPF
Of course, roof installations are more expensive than ground-mounted ones. Offers from six domestic and foreign manufacturers of flat plate and vacuum tube collectors showed a price range of between 70 and 140 CHF/MWh (60 to 120 EUR/MWh) for each plant. The main cost factors were the time and effort expected to be spent on installing the unit and integrating and linking it with and to central heating. If large solar thermal plants were to benefit from the same subsidy amounts as smaller versions, the cost of heat would come down to 30 to 100 CHF/MWh (30 to 90 EUR/MWh).
The figures from the feasibility study seem encouraging, but have their limitations. "So far, calculations have been based on real-life data, but there has been no assessment on site,” said Mojic. The prices from collector manufacturers were only indicative – in reality, businesses might set them higher. “There are yet other unknowns, such as the structural limitations of the roof,” he added.
The next step will be to find some district heating companies interested in integrating solar into their network. One operator has already partnered with SPF to take a closer look at the requirements, such as roof space availability. “We’re looking for other companies from across Switzerland,” said Mojic.
SPF also calculated the cost of ground-mounting, which was 20 to 40 % cheaper. “So far, no one knows if and how Swiss authorities were to approve a system equipped with ground-mounted collectors and whether they would be willing to grant any subsidies. Our objective is to design an actual roof installation and apply for incentives and approval to establish a standard procedure,” explained Mojic.
This text was written by Eva Augsten, a German freelance journalist specialised in renewable energies (augsten@solrico.com).
Websites of organisations mentioned in this article:
SPF – Institute of Solar Technology: www.spf.ch
Energy Agency St Gallen: http://www.energieagentur-sg.ch/