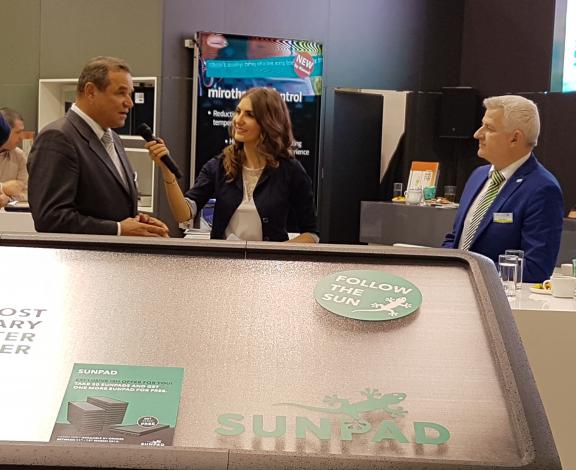 On 12 March, at the ISH 2019 in Frankfurt, Austrian-based Greenonetec unveiled a new integrated 150-litre storage collector system, for which it had come up with an inventive name: Sunpad. CEO Robert Kanduth (left) and Sales and Marketing Manager Patrick Vallant termed the system “the world’s most revolutionary solar water heater, inspired by the sun-loving gecko.”
Photo: Bärbel Epp
And, indeed, the design, setup and price of Sunpad represent a significant departure from Solcrafte, Greenonetec’s first integrated storage collector device, on display at the ISH 2013 six years ago.
Sunpad is Greenonetec’s response to demand for thermosiphon systems, a huge market around the world, estimated at about 7 million units annually. The notable difference is that the new product has merged the collector and tank into one unit, so that building owners will no longer have to deal with large metal vessels on their roof. “We kept the cost of materials for Sunpad to a minimum, achieving an excellent cost-benefit ratio,” Vallant said at the ISH, adding that Sunpad produced 20 % more energy than conventional thermosiphon systems. The higher yield was the result of a compact shape, a well-insulated housing, an anti-reflective coating on the glass cover, and transparent thermal insulation between the absorber and the glass to reduce convection losses.
Transparent consumer pricing
The global roll-out of Sunpad will start in 45 target markets, where Greenonetec is searching for key account sales managers. Sales staff currently offering Solcrafte systems will sell Sunpads too. The product will be available starting in late March.
As part of its marketing campaign, Greenonetec has set the recommended retail price, before taxes, to EUR 899 and EUR 799, with and without a 1-kW electric element respectively. These prices will be adjusted for transport costs and import duties and taxes, based on the world region in which Sunpad is going to be sold. “We want to make sure that we offer consumers our highly cost-effective product at competitive prices in all corners of the world,” was how Kanduth explained the transparent pricing strategy. So far, Greenonetec’s thermosiphon systems with separate tanks have been sold for almost double the amount.

A tube-shaped and stainless-steel heat exchanger has been integrated into the upper section of the comparatively flat Sunpad storage tank.
Illustration: Greenonetec
The collector housing consists of four EPP (expanded polypropylene) components, pressed together and secured in place by a green band around the device. The storage, made of S235-grade steel, will come prefilled with 1 litre of an eco-friendly anticorrosive liquid, while an antifreeze could be used if necessary. Once delivered, the pressureless tank can be filled with tap water until it flows out of the second valve on the opposite side. Regular maintenance by the owner of the device will be required to make sure the storage tank is always filled to the top.
A solar paint is applied to the absorber, which is the tank wall, to provide an absorptivity of 90 %. This black lacquer paint avoids high stagnation temperatures, as they could end up destroying the electric element and letting steam escape the storage tank via the filling nozzles. The Sunpad system was tested by using Greenonetec’s solar simulator, at a high irradiation level of 1,400 W/m2. Not one of the tests has resulted in the water starting to boil.
Organisations mentioned in this article:
www.greenonetec.com
sunpad.solar
News
Domestic Hot Water and Heating
Germany
Austria
Thermosiphon
Solcrafte
Sunpad; integrated storage collector
Greenonetec