Bengaluru Electricity Supply Company, a public utility also known as BESCOM, has been successful in implementing a bylaw to encourage the use of solar energy. Since 2009, 1,234 million m² of collector area had been installed in Bengaluru and had supplied energy equivalent to about 611 million kWh of electricity required for showering each year, BESCOM has said when asked about the success of the project. The massive increase in the number of solar water heaters has been one of the most important measures to combat the city’s chronic power shortage. The photo shows a typical solar thermal installation on the roof of a high-rise building in Bengaluru.
Photo: Jaideep Malaviya
The bylaw was put in place across Karnataka state in 2007. It requires developers to install solar water heaters in dwellings with a floor space of 600 ft², i.e., 56 m², or above if they are built on parcels of land measuring at least 1,200 ft². The mandatory solar thermal capacity is linked to room size and increases based on the interior space available.
BESCOM’s strict implementation policy has turned Bengaluru into a prime example of how to make mandatory solar water heating rules a success. In April 2009, the utility started denying access to the electricity grid on the grounds that a household was not equipped with a solar water heater. The only option left has been to choose a temporary grid connection. While this type of connection may not force anyone to comply with the regulations, consumers will have to pay nearly twice as much for the electricity.
The chart below shows the positive impact which the bylaw has had on solar collector area in the city. From 2012 to 2015, the number of new installations peaked due to an additional incentive that India’s Ministry of New and Renewable Energy had offered for residential water heaters.
If several systems are installed in a multi-family building, the incentive is paid for every household connected to one of them as long as system capacity is 100 litres or more. The incentive amount will later be subtracted on the electricity bills that BESCOM sends its customers. 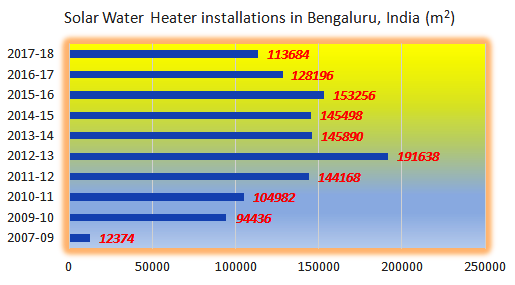 No. of solar water heaters installed due to mandatory regulations in Bengaluru
Source: BESCOM
Initially, the requirement had been to use collectors certified by the Bureau of Indian Standards, an avenue that had only been available to manufacturers of flat plate collectors. It was subsequently changed to include vacuum tube collectors which conform to MNRE standards (see attached document).
The successful implementation of the state-wide bylaw in Bengaluru by BESCOM has provided an impetus for implementing similar measures by other electricity utilities in the country. The national industry association, the Solar Thermal Federation of India, is now urging the government to consider Bengaluru a successful test run and compel more utilities to replicate its success. This would likewise have the effect of helping the government achieve the 20 million m² target that it has set for its Solar Mission initiative.
Organisations mentioned in this article:
https://bescom.org/wenexa-project-details/
https://mnre.gov.in/solar-cities
This text was written by Jaideep Malaviya, an expert in solar thermal based in India (malaviya@solrico.com).