In the last decade, Denmark, China, Germany and Austria played a leading role in the deployment of large solar thermal systems around the world. What country-specific factors helped these four achieve that level of market adoption and how support schemes and business models contributed to success has been the topic of a new review paper written by an international group of experts. The paper, titled Large-scale solar thermal systems in leading countries: A review and comparative study of Denmark, China, Germany and Austria, was published in the Applied Energy journal this May (see the attached document).
Source: Applied Energy Vol. 270 (2020): 114997
This analysis of market growth was jointly written by experts working for four organisations: Daniel Tschopp from AEE INTEC (Austria), Zhiyong Tian from the Norwegian University of Science and Technology, Magdalena Berberich from Solites (Germany) and Jianhua Fan, Bengt Perers and Simon Furbo from the Technical University of Denmark. All authors are members of IEA SHC Task 55, Towards the Integration of Large SHC Systems into DHC Networks, which gave them an opportunity to thoroughly discuss their work.
Although the capacity of large-scale solar thermal systems is still relatively small, i.e., less than 1 % of the small-scale total, those systems are “rising quickly in importance,” the authors said. The capacity of large solar heat systems newly installed in the four countries increased by, on average, 15.5 % a year from 2010 to 2018. Growth in that submarket was in stark contrast to the average annual 2.8 % decline in solar thermal capacity additions globally during the same period.
Regarding Denmark, Austria and Germany, the market overview was set up using available data. In the case of China, however, new data had to be collected. Supported by several Chinese organizations, the paper authors therefore requested information from China’s major suppliers and identified a total of 55 large solar thermal systems.
Market data on large solar thermal systems (above 500 m2) installed in all four countries until the end of 2018 Source: Applied Energy Vol. 270 (2020): 114997
The special case of district heating in China
District heating is a rapidly growing industry in China. It currently supplies heat for around 8.5 billion m2 of floor area, the country’s usual measurement unit for DH capacity, and this capacity has nearly tripled since 2005. As urbanisation continues, China projects a 40 % increase in DH-heated floor area by 2050, or more than 80 billion m2 compared to 57 billion m2 today. Currently, more than 80 % of district heating in northern China comes from coal boilers and only 1 % is provided by renewable sources of energy. The paper’s authors write that there is a great need to lower the environmental footprint of DH in China because of air pollution in winter. They mention the Chinese government’s aim of using renewable energy to heat 3.5 billion m2 of floor area by the end of this year, although renewable energy systems had supplied heat for less than 700 million m2 near the end of 2016. To reduce coal consumption, the country has launched both coal-to-gas and coal-to-electricity projects.
China’s district heating networks have a special design that differs from that found in other leading SDH markets. Typically, Chinese heat networks only supply space heating and are run for only part of the year, in the heating season. For example, in Beijing, they are operated for, at most, four months, from 15 November to 15 March.
Country-specific success factors
Throughout the main part of the paper, its authors analyse what country-specific factors contributed to the deployment of large solar thermal systems in each of the four countries, grouping them into 5 categories. These categories were again divided into sub-categories (in brackets): 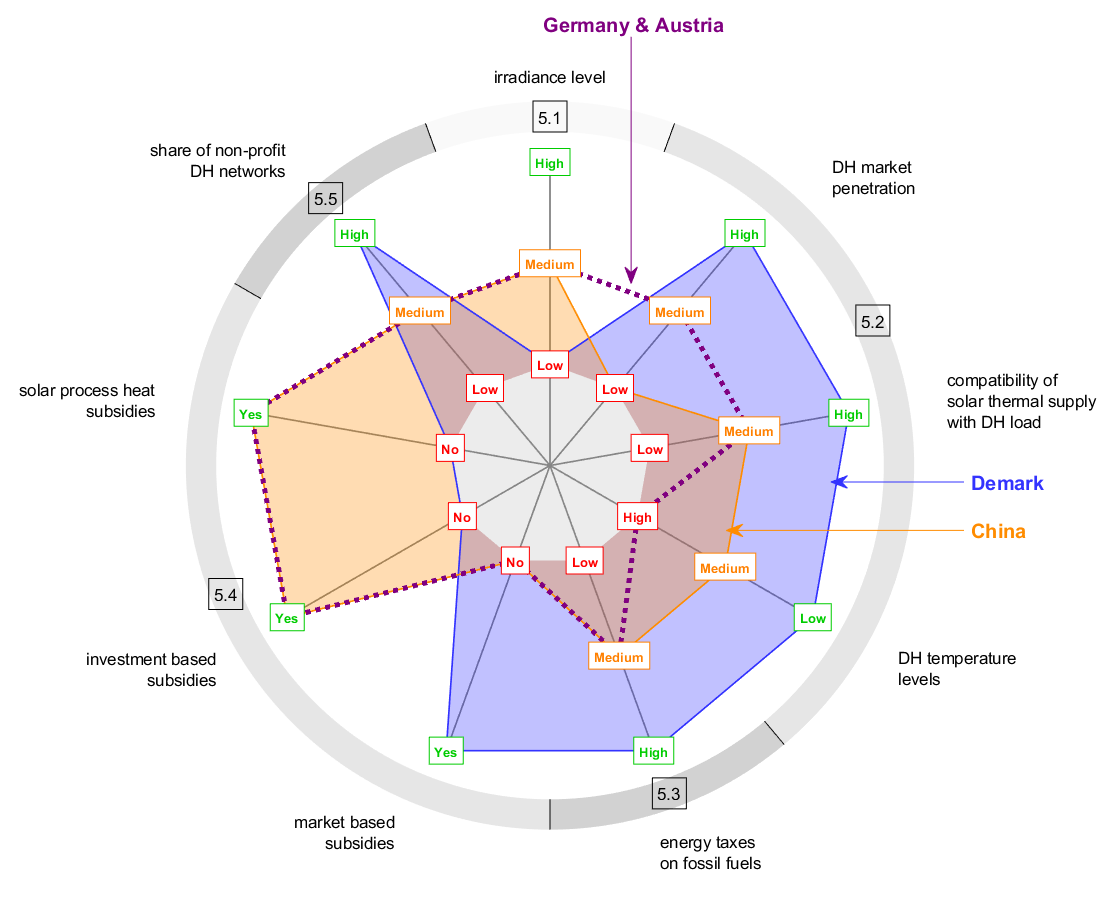 Comparing country-specific conditions in nine subcategories on the grey wheel
Source: Applied Energy 270 (2020): 114997
The chart above shows that the presence or absence of abundant solar resources plays only a minor role in how many large systems were installed, as none of the four countries have very high irradiation levels. It also illustrates that Denmark has the right infrastructure in place for delivering solar heat, as it has a large number of non-profit DH operators (light-blue area).
A big difference between the four countries is their number and type of support schemes. Denmark taxes fossil fuels and has set up an emission trading system for heat utilities. Both are what the report’s authors term market-based subsidies. By contrast, the other three countries have used investment-based incentives (light orange area). The authors suggest taking the former, rather than the latter approach, as market-based incentives “provide a direct impetus for building the most cost-effective systems and maximising solar yields.”
After taking a closer look at the effect that business models have on success in the marketplace, the researchers concluded that “risk minimization strategies are an important, often underestimated success factor to deal with the problem of high initial investment costs”. They recommend that risk minimisation strategies should be always considered when analysing business models for the solar sector. Methods for lowering risk include improving solar yield and heat load predictions, drawing up performance guarantees, engaging turnkey suppliers or setting up an energy service company. Another example is creating an energy cooperative, a popular idea in bioenergy villages in Germany. The residents of these villages establish cooperatives handling energy generation and distribution by focusing on inexpensive prices long term instead of short-term profits.
Organisations mentioned in this article:
www.iea-shc.org
https://task55.iea-shc.org/
https://www.aee-intec.at/
http://www.solites.de/
https://www.dtu.dk/
https://www.ntnu.edu/