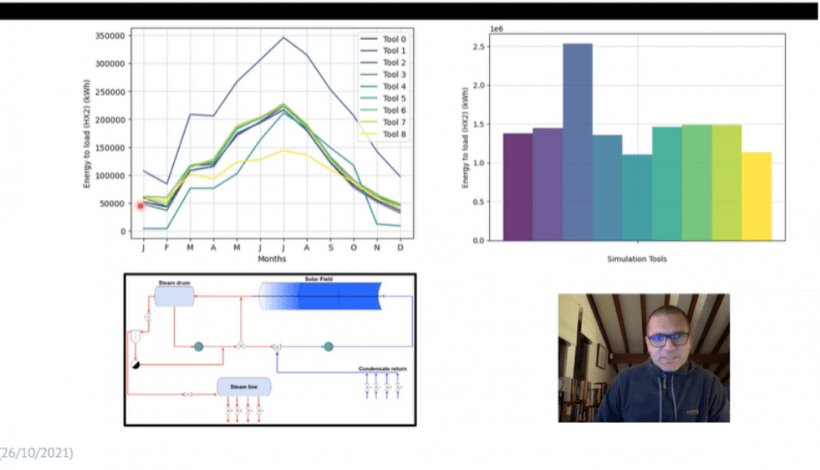 The yield of solar process heat systems as simulated during feasibility studies has a decisive influence on the profitability of the respective investment. Therefore, simulation tools play an important role in the project development phase. Currently, however, project developers use a large number of simulation tools, whose results may differ significantly between each other and which could create a lack of trust from investors. That is why a group of researchers headed by Jose Cardemil, Associate Professor at Pontifical Catholic University of Chile, started to assess several tools, analyse their limitations and compare their results. This work is supported by the IEA Solar Heating and Cooling Programme within Task 64 Solar Process Heat. Cardemil presented the first results of the tool assessment during a presentation at the Solar World Congress 2021.
Screenshot from the presentation during the Solar World Congress
“We have defined a number of case studies based on real plants, which have allowed us to conduct proper yield assessments and to identify the sources of differences”, said Cardemil in his presentation. The four case studies included different collector types at various sites:
“A series of bilateral meetings between different researchers who conducted the simulations allowed us to harmonise the assumptions used by each analyst and to create an agreement for the settings to lower the uncertainty,” added Cardemil. The group also defined a standardised way of delivering the results, which allowed a direct comparison of the yields from different simulation tools.
Altogether nine tools were compared, among them tools created by project developers, tools developed in the context of EU research projects and several commercial simulation tools (see list below). 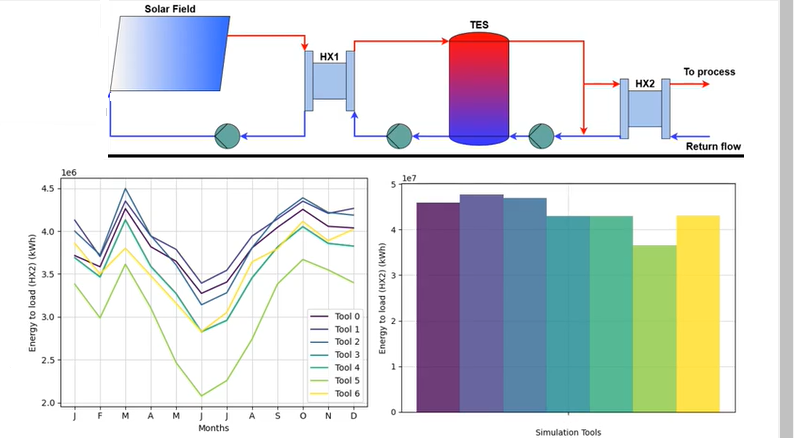 The simulation results for the case study in the copper mine in Chile from the nine different simulation tools shows smaller differences in the annual yields (right), but significant variations at the monthly level (left).
Figure: Task 64
While going deeper into the results on an hourly basis the researchers found even larger variations. They looked into three different solar yield levels. On the collector side, the yield from the solar irradiation is more or less similar, but at the level of the first heat exchanger and in terms of heat delivery to the client, they found the biggest differences.
To summarise, Cardemil listed a number of sources for differences and uncertainties:
“But one of the things that has the biggest impact on the yield is the way the storage is modelled”, concluded Cardemil. His research partners also plan to conduct an additional assessment regarding the impact of time steps considered for the simulation. The research group is on a good track towards defining a standardised way of simulating yields and publishing guidelines to describe that method. It sees the new knowledge as being very helpful in unifying the criteria for simulations and reducing the perceived risk for investors.
Organisations mentioned in this news article:
https://task64.iea-shc.org/
https://www.swc2021.org/
SAM - https://sam.nrel.gov/
TRNSYS - http://www.trnsys.com/
NEWHEAT - https://newheat.com/es/
POLYSUN - https://www.velasolaris.com/?lang=en
SCILAB - https://www.scilab.org/
SHIPcal - https://www.ressspi.com/
SHIP2fair - http://ship2fair-h2020.eu/
GREENIUS - https://www.dlr.de/sf/en/desktopdefault.aspx/tabid-11688/20442_read-44865/
News
Process Heat
Chile
Spain
France
USA
Switzerland
Germany
Brazil
Mexico
IEA SHC Task 64
Polysun
SHIP2FAIR
TRYNSYS
Greenius
NewHeat
Solatom
NREL
DLR