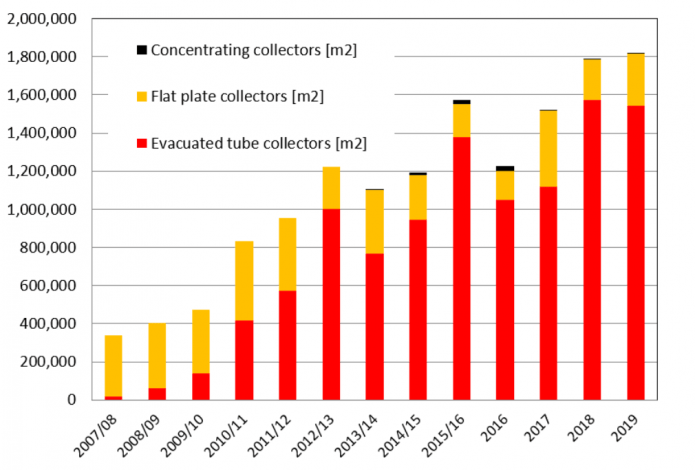 The Indian solar thermal market remained resilient in 2019, maintaining a high level of sales after two years with double-digit growth (17 % in 2018 and 26 % in 2017). According to a survey carried out by Malaviya Solar Energy Consultancy, the total glazed collector area installed in India in 2019 came to 1.27 GWth (1.8 million m2), about 1 % more than what was installed in the previous year (1.25 GWth or 1.79 million m2). Vacuum tube collectors again dominated sales with 85 % of new additions, but remained stable, whereas the market for flat plate collectors grew sharply by 28 % because of rather low numbers installed during the prior year. Sales of concentrating solar thermal systems were at their lowest level since 2012, totalling only 2,500 m2 in 2019.
Chart: solrico / data: Jaideep Malaviya
“A more or less stable market volume in 2019 was a great success, since falling costs in the PV sector have made it more favourable to use roof space for generating solar electricity rather than solar hot water,” Malaviya said, adding that a heat pump as a standalone solution for producing hot water has become increasingly popular among consumers in India.
This latest analysis of the Indian market is based on a survey conducted among the country’s leading vacuum tube collector suppliers, including Nuetech Solar, Redren Energy and V-Guard Industries, as well as major manufacturers of flat plate collectors or absorber fins. Broken down by tube size, the following table shows the vacuum tubes imported into India in 2019. The numbers in the table have been validated by an authorised Indian market research agency maintaining data on goods imports.
This table shows the vacuum tubes imported from China in calendar year 2019. The absorber area is given per vacuum tube according to Bureau of Indian Standards specifications.
Source: Malaviya Consultancy
Between January and December 2019, India imported about 5.86 million vacuum tubes under four HS codes: 84191920, 84199010, 84199090 and 84191910. In 71 % of cases, the tubes were 58 mm x 1800 mm, while a little over 26 % of them measured 58 mm x 2100 mm.
Throughout 2019, the market for flat plate collectors grew by 191 MWth (272,156 m2), a significant increase over the 149 MWth (213,053 m2) put up in 2018. The additional capacity was delivered by a handful of large manufacturers, namely Bhagyanagar, Emmvee Solar Systems and Greentek.
Solar thermal highly popular in Gujarat
Three states, Gujarat, Karnataka and Maharashtra, contributed almost 90 % to last year’s sales total in India, with Karnataka taking the lion’s share at 50 %. About 10 years ago, Karnataka suffered from a severe load shedding in the electricity sector, so it implemented much stricter building regulations than other states. Maharashtra, until now the state with the second-highest SWH capacity additions per year, fell behind Gujarat, whose market has grown significantly in recent years, and contributed about 20 % to the total in 2019. One key reason for the strong growth in Gujarat was that solar energy enjoys generally high popularity across the state, not just in cities but also increasingly among consumers in semi-urban areas and the countryside.
Plus, fierce competition with solar PV for installation space was seen as the key reason for the slowdown of the Indian solar industrial process heat (SHIP) market, despite the 30 % grants offered by the federal government. “Most industrial businesses are looking for solar PV solutions because they offer better system economics,” explained Malaviya. In 2019, only a handful of concentrating solar heat systems received government funding, three for providing process heat at factories and two for commercial cooking purposes. The largest SHIP plant installed in India in 2019 was commissioned last January at Honda Motorcycle and Scooter in Narsapura, Karnataka, to preheat its boiler (see photo below). The 1,320 m2 system is made up of small dual-axis dish collectors manufactured by Quadsun Solar Solutions. 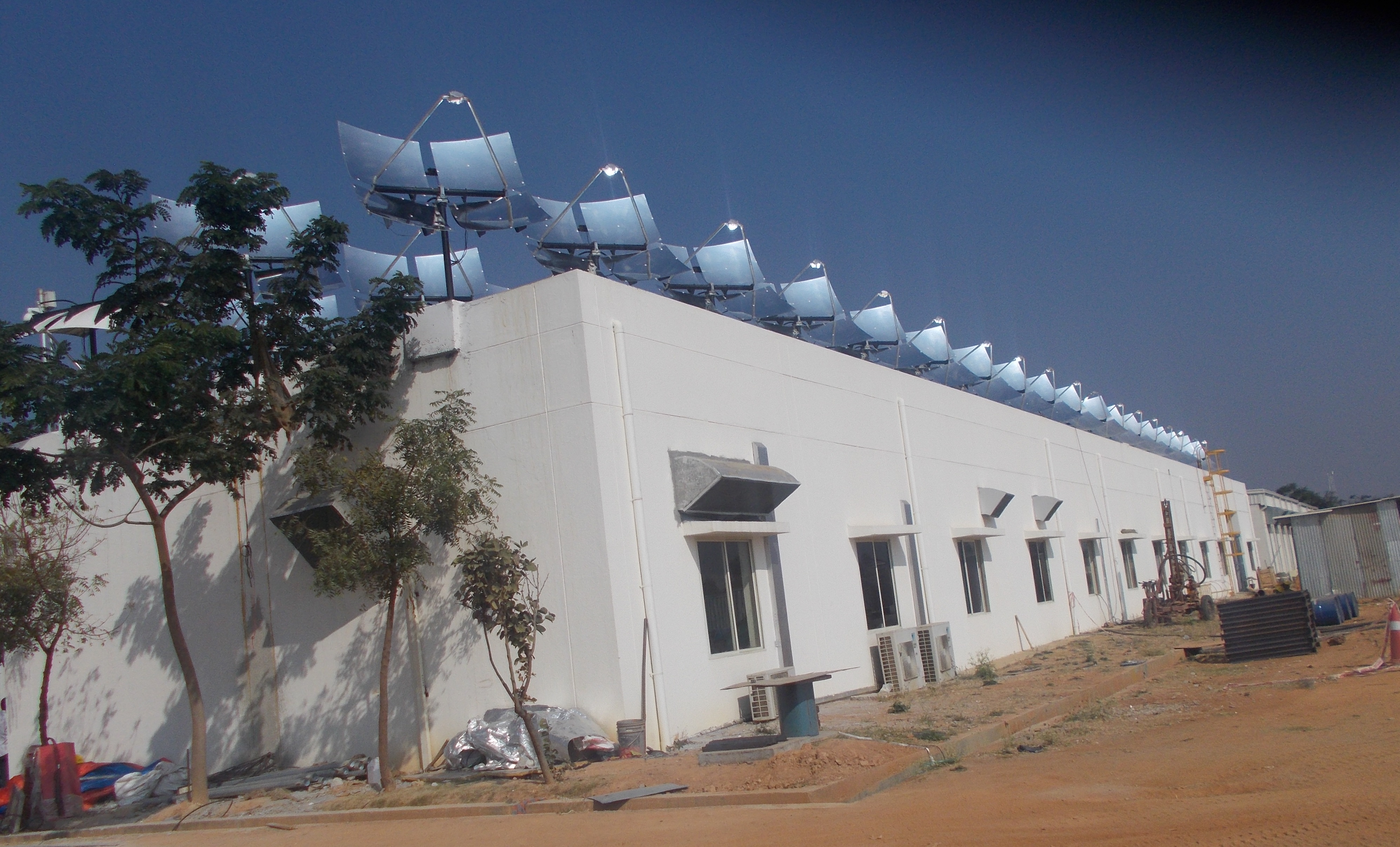