South Africa shows large but untapped potential in terms of Solar Heat for Industrial Processes (SHIP). So far, there have been only seven systems in operation across the country and they provide heat in fields as varied as textile manufacturing (see photo), brewing, cheesemaking and automotive production. A recently published study titled Industrial scale solar heat in South Africa: Opportunities in agri-processing and textiles estimates the potential in agri-processing to be as high as 3.76 million m² of collector area and in textile manufacturing at around 519,000 m² (see the attached document). The 72-page document written by the WWF South Africa in cooperation with the Centre for Renewable and Sustainable Energy Studies (CRSES) of Stellenbosch University and non-profit organisation GreenCape looks at the key drivers for and barriers to increased SHIP deployment in the southernmost country in Africa.
Photo: CRSES / Ulrich Terblanche
The WWF study focuses on low-temperature applications (up to 150 °C), as solar thermal technology is easier to implement in this range. Agri-processing – which includes food, beverages and tobacco – has been chosen because of the support it receives based on several government policies.
The table below shows a step-by-step assessment of SHIP potential in agri-processing. The potential in the textile industry is calculated in the same way, although total energy demand does not include coal use there, which means the results only show the minimum which could be tapped.
Calculating the economic and technical SHIP potential in agri-processing (food and beverages) in South Africa
Source: Page 35 of WWF study
To achieve significant SHIP increases, the authors of the study list several issues which need to be tackled:
The economic feasibility of industrial process heat depends mainly on the cost of the fuel that is to be replaced. According to CSRES’s internal rate of return calculations, solar heat is an option worth exploring in factories which use heavy fuel oil, paraffin, electricity, diesel, petrol and LPG, provided that an IRR above 10 % is acceptable to investors (see the figure below). Coal-substituting SHIP systems, however, show unattractive IRR rates between -10 % and 6 %. The 603 EUR/m² average on which the chart is based, is from a 2016 market assessment, during which installers of 47 systems above 50 m² shared their cost figures with CRSES. 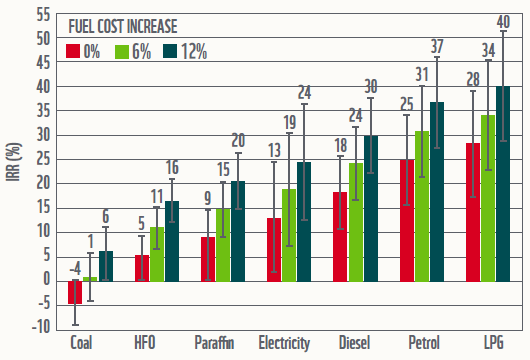 Internal rate of return (IRR) of a large-scale solar process heat installation (system cost: 603 EUR/m²; 20-year service life) replacing conventional heating systems based on different increases in fuel prices (0 % to 12 %). The grey-coloured bar intervals were added to take into account that cost of energy may vary in regions of the same country because of transport, boiler efficiencies and distribution losses (40 to 80 %). The calculations do not include tax incentives benefitting the industry and the cost of financing, meaning there is no debt to be paid off.
Source: Page 46 of WWF study / CRSES
Websites of organisations mentioned in this article:
www.wwf.org.za
http://www.greencape.co.za
http://www.crses.sun.ac.za