In April 2016, British company SolarCool Energy put into operation its largest SolarCool system, which was installed on the roof of Chingford Fruit’s processing plant (see photo) in Dartford Kent, UK. Fifty-four retrofitted vacuum tube collectors totalling 160 m² have since reduced the power consumption of the existing compression chillers with a cooling capacity of 1 MW. According to Central Services Manager Colin Ormerod, Chingford Fruit has saved 100,000 kWh of electricity during process cooling (16 °C) over the two full months that the system has been in operation (May and June). The SolarCool technology was developed in 2009 in the USA, and reached European markets in 2013/2014. In the meantime, there have been around 6,000 systems set up across all continents – the majority in Latin America, Caribbean and South East Asia, according to Dr Kurt Orthmann, Joint Managing Director at SolarCool’s European subsidiary, SolarCool Europe.
Photo: UK SolarCool Energy installation
“The SolarCool installation commissioned in April has fulfilled our expectations,” Ormerod confirmed. “The retrofitted solar field saved 26 % of the electricity demand for cooling in 24/7 operation mode. It happened that I entered the room with the five-chiller system on a sunny day, and there was no noise and only one of the five compression chillers was working as a pump.” Ormerod estimated that the SolarCool installation would save around 500,000 kWh annually. 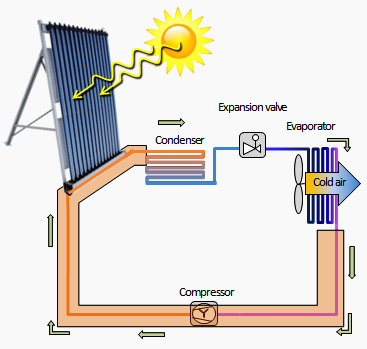 Flow chart of the compression chiller of a SolarCool unit using solar heat
Chart: SolarCool Europe
How has it been possible to save so much electricity at the food processing plant in Dartford Kent? The system reduces the power consumption of the compressor, which is responsible for 80 % of the electricity demand of an air-conditioning or cooling system. Solar energy heats the refrigerant gas after it exits the compressor and before it is directed into the condenser, causing the refrigerant to superheat and provide a boost in mass flow, which then leads to greater cooling capacity in the evaporator. The solar energy therefore ensures that the evaporator achieves the highest point load early, and the controller then tells the compressor to shut down.
In multi-stage compression systems such as the one at Chingford Fruit, solar energy delays the start-up of the second compressor, reducing its electricity demand. An example: If a system has three compressors of 15 kW (4.3 tonnes) each, they usually work in conjunction with one evaporator of 45 kW (13 tonnes). The system starts up with a relatively small required load in the evaporator, putting only one compressor to work. When the required load rises above the capacity of the first compressor, the solar energy has already increased mass flow over and above the first unit, delaying the start of the second one. The same scenario plays out regarding the start-up of the third compressor.
The refrigerant – in air-conditioning systems, mostly R410A gas – goes directly through the collector field with Sidney tubes and a U-shaped register. The technical challenge is to have the fittings and valves resist the 40 bar pressure across the entire solar circuit without risking leakage and have all components used in the solar circuit cope with the chemical composition of the refrigerant. “Here, we have to be very diligent on site,” Orthmann emphasised.

After retrofitting solar collectors at Golden Harvest in Malta, the five compressors showed much fewer operating hours in May compared to the same months in the previous year.
Source: SolarCool
“Compared to a state-of-the-art air-conditioning unit, the integration of a solar collector system saves around 30 % of the electricity for the chiller,” Chris Micallef, Technical Director at SolarCool Energy UK, confirmed and referred to a Malta case study, which was started in February 2015: The industrial bakery of Golden Harvest operated a 220 kW cooling system with 5 multi-stage compression chillers all year around. On average, the solar cooling system consumed 606 kWh daily, equivalent to around EUR 31,000 in electricity costs per year. After adding four SolarCool Systems units to the first and the second compressor, daily power consumption dropped to an average of 390 kWh, resulting in annual electricity costs of around EUR 20,000.
“After our retrofit, only two of the compressors were used continuously, whereas the third one was in and out of operation as required at the highest point loads,” Micallef summarised the case study. “Malta has ideal irradiance levels of 3,000 sunshine hours per year and the ROI of this retrofit was 1.8 years.”
Averaged annual key data for SolarCool retrofit at bakery Golden Harvest in Malta
Source: SolarCool Energy
“French, Portuguese, Cypriot and Spanish PhD students are currently testing a SolarCool unit at various universities in Malta, the UK, Panama and Portugal to evaluate how economical they are, but no official data has been available yet,” Micallef confirmed.
More information:
www.solarcoolenergy.com
News
Solar Cooling
UK
USA
Malta
Panama
Portugal
SolarCool Energy
Chingford Fruit’s
SolarCool Europe
Golden Harvest