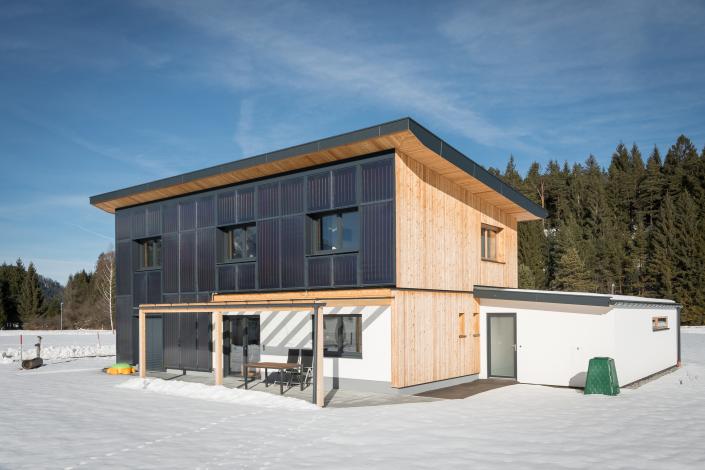 Between 2014 and 2019, the Austrian Climate and Energy Fund supported the construction of over 100 solar-heated houses, 19 of which were monitored following completion. Regardless of whether it was a lightweight or a brick house that was put up, the rooftop or facade collector system installed during construction has since met on average 66 % of the yearly space heating and hot water demand from those living in the building. That percentage could even exceed 95 % if an active thermal mass system and a buffer tank are both used in the house. An example of this is the Schindl family’s home, the southeast facade of which is half-covered in collectors (see photo above).
Photo: Andreas Schindl
Funding eligibility was limited to one- and two-family homes where solar energy would meet at least 70 % of annual space heating and hot water demand according to the project draft. No further requirements regarding the building type were set, besides that the yearly heat demand from a solar house should not exceed 35 kWh/m2 (based on the weather patterns at a nationally prespecified location). A popular choice among homeowners whose house was monitored post-completion was a heavyweight house where the built-in log burner is connected to central heating to raise the temperature in the living room if necessary. Another was a lightweight building equipped with a ventilation unit and a heat pump. In all, 60 % of the homes that were part of the monitoring programme have ventilation installed.
The extensive research work that accompanied market adoption was conducted by a consortium led by Austrian AEE INTEC. The institute sat down with each applicant for a consultation session and was also in charge of analysing the data gathered from monitoring the 19 houses for a year.
High solar yields
The solar thermal system is at the heart of the Solar House heating concept. However, the size of the collector system varied greatly among monitored homes, ranging from 17 m2 to 77 m2. Walter Becke, leader of the AEE INTEC research group accompanying the project, said the output he has seen so far is very encouraging. Over 60 % of the monitored solar systems exceeded the expected energy yield per unit. On average, each system produced 312 kWh/m2 of aperture area.
However, many of the buildings also required more thermal energy than estimates had shown. One reason for this is that there was additional demand for space heating, Becke said. “In winter, the mean temperature in living rooms was 23 °C. But those issuing energy certificates assume a temperature of 20 °C,“ he explained. As a result, 10 of the residential buildings consumed 20 % more energy, three of them as much as 50 % or more. In a case like this, a 70 % solar fraction is out of the question even if solar yields are high. It should come as no surprise then that only eight of the monitored solar houses shown in the following chart achieved a 70 % solar fraction, as stipulated by the funding program. 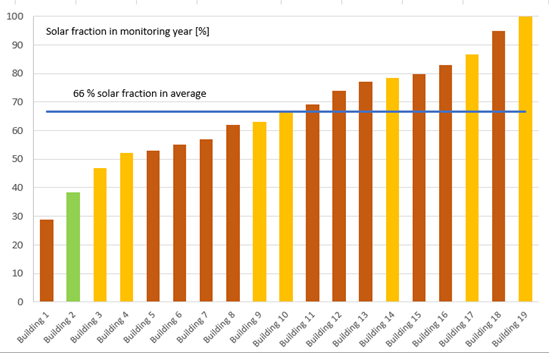 Fig. 2: Solar fraction achieved by the 19 buildings that were monitored for a year. The heat demand from those marked in red is ≤35 kWh/m²a. Yellow means ≤22 kWh/m²a and green ≤10 kWh/m²a.
Source: AEE INTEC
Active thermal mass boosts solar fraction
Energy storage is essential to achieving a high solar fraction. Currently, there are two types of storage units, conventional water-filled buffer tanks and active thermal mass systems. The latter describes a concept whereby solar-heated water flows through pipes embedded in a floor slab or a ceiling to heat the surrounding concrete.
“One great example of a thermal mass project is Solarhaus Westreicher in Tyrol (see figure 3). It produces energy by using comparatively basic technology,” Becke said. The 55 m3 of concrete slabs that make up the floor and ceiling at ground level function as the building’s active thermal mass system, even though as little as 17 m2 collector area and 950 litres of buffer storage has already been enough for a 77 % solar fraction during the one-year monitoring period. The heating circuit contains only one pump, the solar pump, while the secondary circuit and the wall heating system are gravity-fed. 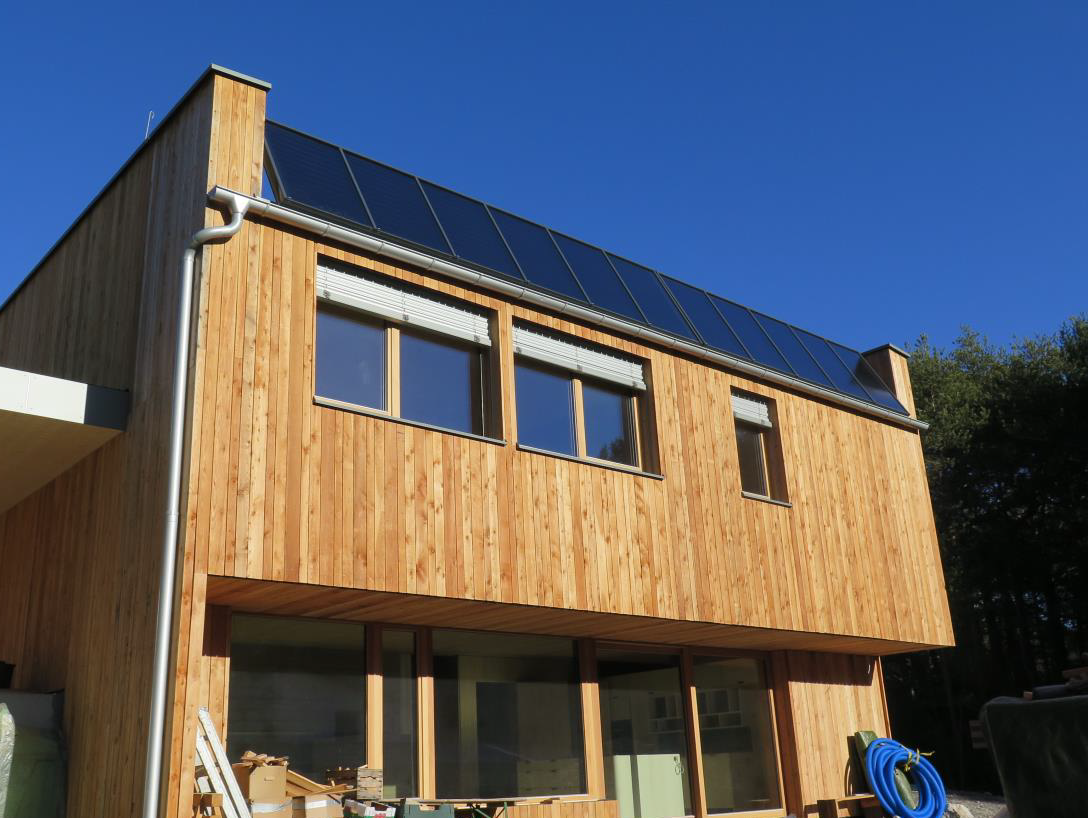