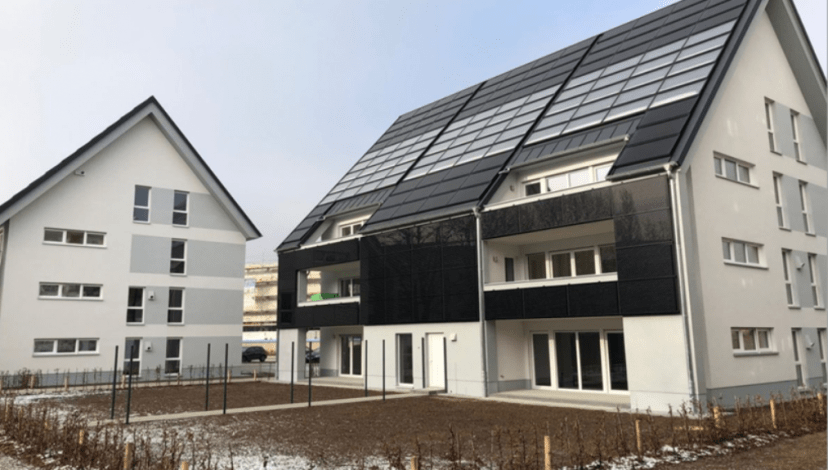 Many new largely solar-heated houses in Germany are multi-family buildings, and their number is growing, according to Sonnenhaus-Institut (Solar House Institute), an alliance of about 300 architects, planners, building companies and system integrators that specialise in the design or construction of houses where sunlight provides at least 50 % of the heat and, in some cases, electricity a year. The photo shows two multi-family buildings that were put up in Cottbus in 2018 and that meet over 60 % of their residents’ heating needs via a 100 m2 solar system and a 24,600-litre seasonal storage tank. After the funding opportunities for solar thermal were extended this January, there has been a notable jump in applications for solar-heated one- and two-family homes.
Photo: Helma Eigenheimbau
In the first half of 2020, BAFA, the agency managing the German Market Rebate Programme, received as many as 105 applications for solar houses, whereas only 24 were submitted during all of last year. The steep increase was the result of favourable funding options, such as grants that meet 30 % of the cost of large solar fields and storage. The subsidy covers up to 80 % of the additional cost for the energy supply systems in primarily solar-heated houses, according to calculations by the group. 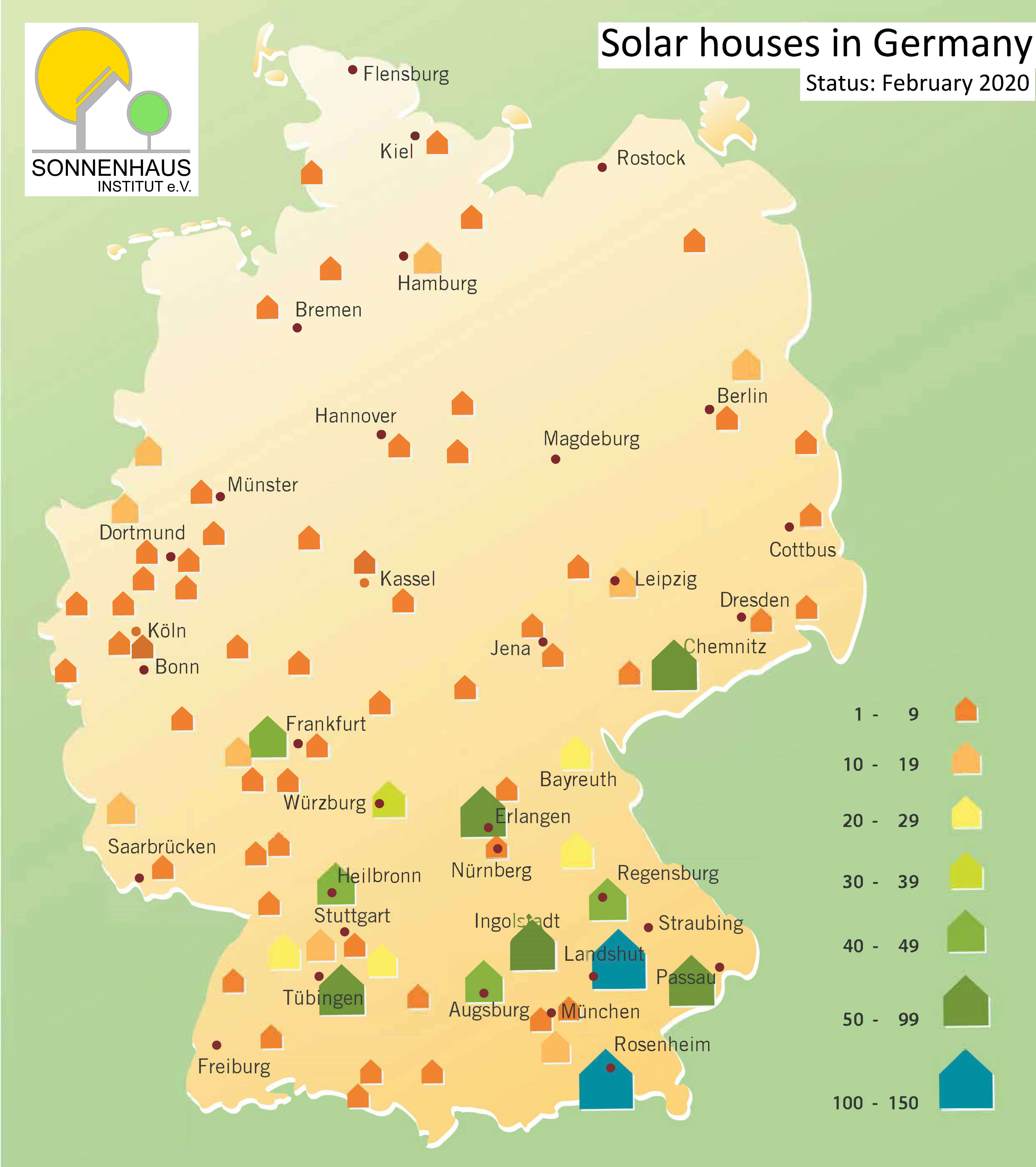 Bavaria in southern Germany has so far been the focal point of solar house construction in the country. Still, the idea is becoming ever-more popular in other regions too. In all, about 2,200 residential and commercial buildings in the German-speaking area of central Europe receive at least 50 % of their thermal energy from solar heat systems.
Source: Solar House Institute
In its latest annual report, published at the end of 2019, the alliance’s co-chair, Georg Dasch, described a number of key market trends. For example, single-family homes made up the bulk of largely solar-heated houses for years, before the concept has been now shifted towards multi-family houses and industrial facilities. In addition, he noted that a number of solar houses can now also be found in the northern regions of Germany, at latitudes that come with lower irradiation levels. The country’s northernmost solar home has been put up in Kiel on the Baltic Sea coast (see the map above).
Photovoltaic technology is gaining traction in the solar housing market as well. A new solar house design that uses PV generators to power heat pumps has been a favourite among owners of single-family buildings in recent years, explained Rainer Körner, who co-chairs Sonnenhaus-Institut with Dasch.
In 2014, the alliance decided to broaden the definition of what constitutes a largely solar-heated house. From that year on, a solar house no longer had to have a large solar thermal system and a storage tank to meet over 50 % of a building’s yearly heat demand. A PV generator that powers more than 50 % of the electricity demand of the heat pump over the year also meets the alliance’s criteria.
In the same year, the group introduced a wider variety of largely solar-heated houses, such as Sonnenhaus Plus, a building where an additional PV unit ensures a positive annual primary energy balance. A third category of houses, named Sonnenhaus Autark (energy-independent solar houses), needs to use solar energy to meet half the demand for both heat and power. The degree of energy independence on the electric side was defined via calculating the ratio of solar power use to total electricity consumption by a building’s occupants, including auxiliary power needs. In this case the solar electricity needs to be consumed directly by the heat pump, for example, without using the public electricity grid as a temporary storage. That means that the heat pumps run on solar energy during sunlight hours in order to charge a storage system that can later provide energy for space heating and hot water in the evening or at nighttime.
Electricity, heat and transport all key to solar house design
“We need to take a holistic view of energy planning and bring together electricity, heat and transport solutions to create new building designs and energy generation concepts,” said Timo Leukefeld, a Sonnenhaus-Institut board member and a pioneer in highly energy-independent multi-family building construction. In partnership with the large-storage tank producer Jenni Energietechnik from Switzerland, Leukefeld has designed two solar-heated multi-family houses in Cottbus (see the photo above).
The large solar thermal and PV systems installed on roofs, facades and balconies meet about 70 % of occupants’ heat and electricity needs (see the figures in the table below). Hence, the housing association that owns the two buildings offers tenants an all-inclusive rent, including a flat rate energy charge of around 10 EUR/m2, according to a news article published by the Sonnenhaus-Institut group in December 2018. In addition, excess solar power generated on site can be used to charge electric cars. The housing association and its tenants also agreed on consumption limits, above which energy use will be billed individually.