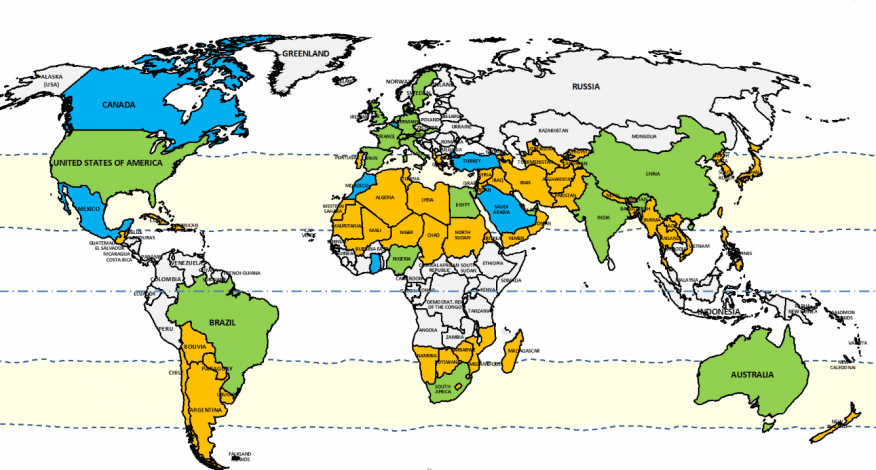 The just started international research platform Solar Cooling for the Sunbelt region is very popular among research institutions, manufacturers and consultancies around the world. Already more than 50 organisations from the green-marked countries on the map have signed a letter of support. Other institutions based in the blue-coloured countries are in progress of establishing a cooperation with the new solar cooling research group called Task 65 which is supported by the IEA Solar Heating and Cooling Programme. Map: Task 65
„We are happy about the positive response especially from countries like India, Brazil and South Africa” which are all situated in the Sunbelt region with at least a part of their territory”, says Dr Uli Jakob from the Green Chiller association and newly elected head of Task 65. Large players in the energy field like Engie BU Africa in France or Thermax in Europe have expressed interest in joining the solar cooling expert group.
The sunbelt region is characterised by its sunny, hot-arid or hot-humid climates between the 20° and 40° of latitude in the northern and southern hemisphere. Countries in the sunbelt region which are not yet connected to Task 65 are coloured yellow in the map above.
The keyword of the concept paper of the solar cooling research platform is adaptation. The idea is to adapt existing concepts of either solar thermal or solar electricity cooling from the OECD countries like Europe, USA or Australia to the countries of the sunbelt region. The researchers agreed to consider systems with a wide range of solar cooling capacities from 2 to 5,000 kW and they decided to run the research platform over four years up to June 2024. Those interested in joining the platform can contact Jakob for more information: uli.jakob@drjakobenergyresearch.de.
Supported by Mission Innovation
A big milestone to worldwide outreach was achieved in October 2019 when Jakob received an endorsement letter from the Innovation Challenge No. 7 (IC7) Affordable heating and cooling of buildings, set up by the global Mission Innovation Initiative. “We welcome this activity and are keen to support the efforts through facilitating communication with IC7 member countries and by sharing updates to the broader public via our digital newsletter”,  says the endorsement letter signed by Amal Hamadeh, co-chair of IC7 based in the United Arab Emirates.
Pioneering solar thermal cooling in the US
Another Innovative feature of the new Task 65 is the fact that the subgroup on demonstration will be headed by a solar heating and cooling system supplier, the US-based company Ergsol. The founders of Ergsol, Monika and Wolfgang Weiss, have already installed several vacuum tube collector systems for hot water applications in sport gyms and one solar process heat plant, but they also want to open up the solar thermal cooling market in California.
Solar thermal cooling is still a niche market with less than 2,000 systems deployed globally as of 2019. “Due to changing distribution channels and mainly B2B sales of the sorption chillers the tracking of newly installed solar driven systems is difficult and can only be estimated,” says Jakob. The new international research platform can play an important role in interlinking national research and project development activities in the field of solar thermal and solar PV cooling, to bundle up the information and make it publicly available. Besides the Task 65 research group will focus on improving solutions for heat rejection systems in hot and arid climates and analyse storage concepts based on ice, water or phase change materials.
Organisations mentioned in this article:
https://task65.iea-shc.org
https://www.iea-shc.org/
https://ergsol-xdxt.squarespace.com/
http://www.greenchiller.eu
http://mission-innovation.net/
News
Solar Cooling
Germany
United Arab Emirates
France; India
Brazil
South Africa
USA
Mission Innovation
Engie BU Africa
Thermax
heat rejection
Green Chiller Association
ergSol