In March, Dutch-based HRsolar began manufacturing a completely redesigned collector on a fully automated production line. Called Nero, the black-coloured unit is 40 millimetres thick – as slim as a photovoltaic panel. According to the manufacturer, the aim had been to “reinvent the concept of solar thermal, since it is increasingly being integrated with other sustainable technologies, such as photovoltaic systems and heat pumps.” Nero’s width and length correspond to the dimensions of commonly available PV panels, which measure 1,640 by 990 millimetres.
Photo: HRsolar
In 2014, the company had already offered a first version of its collector, which had been incorporated into a standard PV frame to allow installers to combine solar thermal and PV on a roof. “The collector opened new markets for us, as installers of PV systems, heat pump suppliers and developers of high-efficiency building concepts came to appreciate its design and compatibility,” said Robbert van Diemen, Commercial Manager at HRsolar. Positive feedback from customers encouraged HRsolar to develop the system further. The result has been a panel which is black all around and has the same thickness as typical PV panels.
“It’s a product ‘For the Next Generation’, as we like to call it,” said van Diemen. The meaning of the phrase is twofold in that the unit not only helps make the world more sustainable for future generations but also represents a brand-new generation of solar thermal systems. The biggest challenge when creating the panel was the thickness of 40 millimetres, which forced HRsolar’s R&D department to think outside the box. Van Diemen emphasised that it had been the first time in the company´s history that aesthetic concerns had taken priority during collector development.
Thermal connections at the back
The copper pipes placed on the back of the aluminium absorber are covered with U-profiles, which are attached to the absorber by means of a high-temperature tape (see left image below). The space between glass and absorber is then insulated with gas, while an insulation material is put between the absorber and metal back sheet. Afterwards, two connectors for feed and return are added to the back of the collector, where a PV panel would usually have a junction box (image on the right). 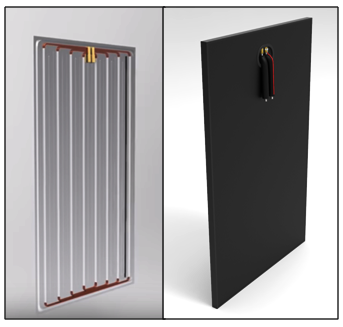 Two images of the back part of Nero: The left picture shows the U-shaped profiles covering the copper pipes during production, while the one on the right displays the finished collector unit.
Source: HRsolar
The manufacturer has achieved savings in four ways:
Of course, the Dutch market is dominated by PV, as demonstrated in two previous news articles that include either the figures gathered by ISDE on collector systems below 200 m² or those by SDE+ about solar fields of 200 m² and above.
The market’s strong focus on solar electricity was precisely why HRsolar developed Nero. The slim black component has convinced suppliers as well as installers of PV systems and building-integrated solar electricity solutions that solar water heating can be a worthwhile addition to photovoltaic installations.
Besides domestic water heating, Nero can be used for low-temperature borehole regeneration, for example, when running ground source heat pumps. Because the collector is filled with gas, there is no risk of condensation inside the unit even if operating temperatures are low.
Organisations mentioned in this article:
www.hrsolar.nl/en/nero-solar-collector/
News
Domestic Hot Water and Heating
Netherlands
fully automated production
Nero
SDE+
ISDE
HRsolar