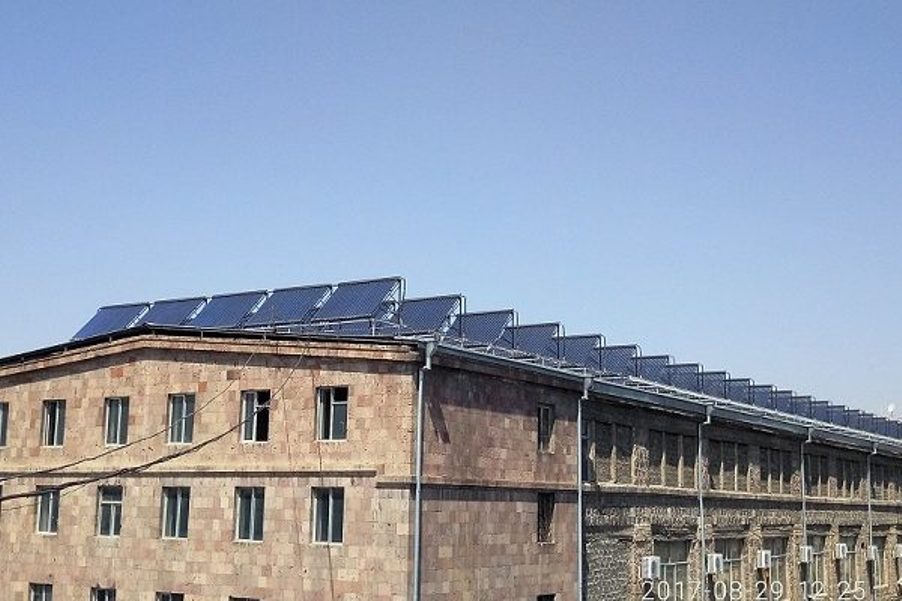 Shtigen, a leading Armenian importer of vacuum tube collectors, is planning to build its own collector production facilities in Armenia. The company’s sales had significantly increased in recent years as a result of gas price increases, said Managing Director Hayk Shekyan. Shtigen currently has an exclusive distribution agreement with Chinese-based collector manufacturer Sunrain for Armenia and Georgia, offering residential and commercial solar thermal solutions that come with a five-year manufacturer’s guarantee. The photo shows one of its systems on the roof of a sports centre in Armenia’s capital Yerevan. It is made up of 14,520 vacuum tubes and was installed last year to heat two pools and the water for the building’s showers, which are used 600 to 800 times a day.
Photo: Shtigen
“Some of our main customers are households, hotels, factories, sports centres, swimming pools and hospitals,” said Shekyan. Although there is no official statistic on the size of Armenia’s solar thermal market, the company expects demand to grow for another five years at least. Whereas households prefer to buy easy-to-install thermosiphon systems, most local manufacturers have been putting up pumped systems equipped with storage tanks to provide heat at nighttime too.
In 2015, Shtigen installed several large solar thermal systems to supply heat to hotels. They were supported under the Green Leasing scheme, which had been implemented by Armenian-based ACBA Leasing but, according to Shekyan, had come to an end in the meantime. Still, because the price of gas has remained high, at 0.29 USD/m3 including taxes, demand for these types of systems continues to grow. “This is why large companies see an advantage in switching to solar,” he said.
Key figures on Armenia

This article was written by Eugene Gerden, a Moscow-based freelance journalist specialising in renewable energies.