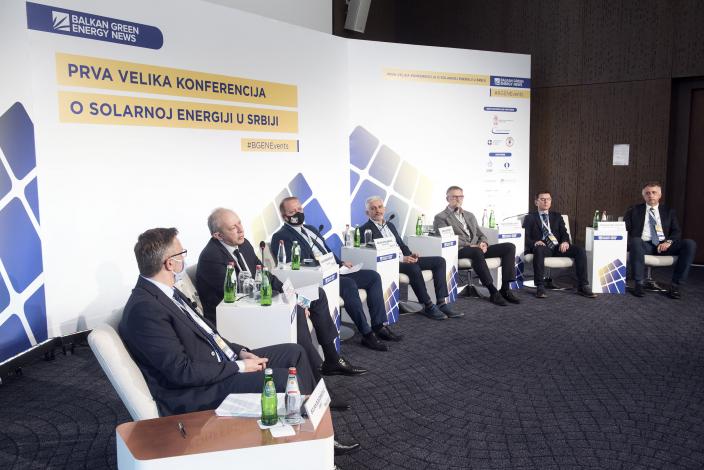 Serbia would very soon take a significant step forward by approving a new Renewable Energy Act, Zorana Mihajlović, the country’s deputy PM and mining and energy minister, said at the First Big Conference on Solar Energy in Serbia on 14 April 2021 in Belgrade. The now-passed law includes the announcement of a support scheme for renewable heating and cooling and allows independent RHC producers to connect to existing distribution systems, as well as to supply and sell thermal energy. The online event – which, depending on the speaker, featured simultaneous interpretation into English or Serbian – was organised by Balkan Green Energy News and was attended by about 2,000 people. In her keynote speech, Mihajlović expressed hope that the law will lay the groundwork for a solar energy boom in the Balkan country and help lower emissions of greenhouse gases. The day’s second conference panel, titled ReDEWeB – solar thermal as an element of sustainable urban energy systems in the process of the energy transition (see photo), was organised by Bojan Bogdanović, ReDEWeB Fund Manager and supported by the Austrian government.
Photo: Balkan Green Energy News
By 2040, Serbia aims to generate at least 40 % of its electricity and heat from renewable energy sources, the minister said. A month earlier, she had signed a Memorandum of Understanding with the European Bank for Reconstruction and Development (EBRD) to promote the use of renewable energies for the production and distribution of thermal energy in Serbia. Through its Renewable District Energy in the Western Balkans Fund, also known as ReDEWeB, the bank is supporting Serbia’s efforts to decarbonise district heating and cooling systems. Feasibility studies on the use of solar thermal energy in Bor, Novi Sad, Pančevo and Zrenjanin are being conducted or have already been completed (see table below).
Bogdanović, who led the second panel, later drew a comparison to the Danish market, to illustrate how much potential there is for integrating solar thermal energy into Serbia’s district heating grids. The latter country has 30 % more sunshine hours and significantly lower labour costs than the former, he noted, which means solar heat can be expected to be as viable in the Balkans as it is in Scandinavia. He also said that after a 10-year payback period, the generated solar heat would be free and not pollute the air in any way – an important point, as “some Serbian cities are grappling with high levels of pollution because many residents continue to use inefficient heating technologies.”
Renewable Energy Act passed parliament
Furthermore, the panellists seemed to agree that the new Renewable Energy Act needs to encourage district heating operators to start using clean sources such as solar thermal energy. One chapter of the law, dedicated to heating and cooling, promises that the government will subsidise the installation of RHC solutions and give independent RHC companies the opportunity to connect to existing grids, as well as to supply or sell the heat they produce. This could bring about significant improvements in centralised or distributed solar heat generation. The Act passed parliament on 19 April and will be published soon.
According to SADHP Director Dejan Stojanović, the share of renewables in the district heating sector in Serbia amounts to as little as 0.004 %. Mentioning Austria as an example of well thought-out solar thermal policy, he voiced his hope that the new law will lead to the incentivisation of clean heat generation units that run on solar thermal energy and not just of those powered by biomass.
Serbia’s most advanced example of supplying solar heat to district heating plants can be found in Pančevo. As early as 2017, the city started up a solar district heating system, the capacity of which grew by 55 % last year. According to Zoran Božanić, CTO at Pančevo’s JKP Grejanje, the facility now meets 15 % of residents’ hot water demand. With support from the EBRD, the city intends to optimise the plant by adding another 35,000 m2 collector area , as well as seasonal energy storage. “We will then be able to use the heat generated in summer during the winter months,” Božanić said. In his PowerPoint presentation, Hrvoje Milosevic, Sales Director of Austrian solar thermal project developer Solid, explained how the expertise gained from putting up SDH systems in Austria could help implement similar projects in Pančevo and Novi Sad, so that heat generated in summer can be stored for winter. “The new RES Act,” he said, “could encourage district heating operators to use renewable energy.”