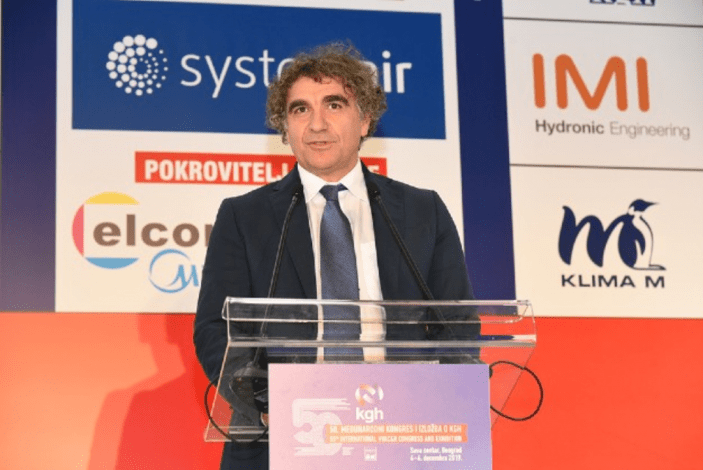 Renewable district heating has become a hot topic in Serbia. The conference Renewable Energy Sources in District Heating and Cooling, held at the same time as the 50th International HVAC&R Congress and Exhibition in early December in Belgrade, attracted more than 400 attendees and featured prominently in the media. The keynote address at the conference, which had been organised jointly by the European Bank for Reconstruction and Development (EBRD) and the International Renewable Energy Agency (IRENA), was given by Miloš Banjac, Serbia’s Deputy Minister of Mining and Energy. All presentations from the event have been posted online and are available for download.
“The great interest shown by experts and the media during the December conference helped us a lot in forging new relationships with high-level representatives for municipalities, local governments and public utility companies to raise the profile of SDH,” said Bojan Bogdanovic, who launched the event. He is also Principal Fund Manager of Renewable District Energy in the Western Balkans (ReDEWeB), a programme supported by Austria and implemented by the EBRD.
Pancevo – Serbia’s number one in SDH systems
ReDEWeB has already supported several prefeasibility and feasibility studies on solar district heating in Serbia and Kosovo. The most advanced project in terms of planning is the one in the Serbian town of Pancevo, where the two-year test of a 906 m2 solar field put up in January 2017 has convinced the local council of the benefits of solar heat. Together with the Kotež power plant, the field supplies hot water to about 2,200 citizens. The council then commissioned the installation of 198 large collectors, mounted onto the roof of the Kotež plant, to meet an even higher share of the hot water needs in the district heating network with solar energy. The council members are now looking into adding an SDH system with seasonal storage. A prefeasibility study prepared by Austrian engineering firm Solid mentions a 35,000 m2 field of collectors, 150,000 m3 of storage area and a 15 MW absorption heat pump.
“We are financing the feasibility study in Pancevo via ReDEWeB,” confirmed Bogdanovic. He added that with the help of funding by both the EBRD and the KfW Bank, a prefeasibility study regarding a possible SDH site in Pristina, Kosovo, has been completed as well. Solar district heating has also been the subject of prefeasibility analyses in the Serbian towns of Bor and Novi Sad.

Big Solar Concept: The absorption heat pump (AHP) that is part of the system plays a central role in de-charging the connected seasonal storage tank, as it raises the tank temperature to that required by the district heating grid.
Source: Solid
Patrick Reiter, Project Development Engineer at Solid, said in order to support the growth of SDH in the Western Balkan region, it was important to:
Reiter also recommended the use of the Big Solar concept for cities in the Western Balkans, since it allows for an increase in the solar fraction to meet district heat demand throughout the year and is particularly suitable for seasonal heat storage that is additionally charged by waste heat from either industrial processes or combined heat and power plants.
Opportunities for SDH in Belgrade
In Čukarica, one of the districts of Belgrade, Serbia, researchers working for UNEP’s District Energy in Cities Initiative cooperated with scientists at the Technical University of Denmark (DTU) to conduct a study on space limitations at the Cerak power and heating plant, which supplies heat to 27,000 flats. “The remaining area on the Cerak facility is about 38,000 m2, which leaves enough room for a 10,000 m2 solar field,” said Dr Romanas Savickas, Senior Energy Adviser for the UNEP-DTU partnership. The investment in the 10,000 m2 field would be 2.5 million m2 and funded via a 3 % loan that will be paid off in 10 years and has an 8.5 % internal rate of return, according to Savickas’ presentation.
His recommendation, however, was a 35,000 m2 collector field to meet all of the hot water demand from the Cerak network in summer (see the chart below). This option would require additional space outside the power plant grounds.