By the end of 2017, the market for solar heating and cooling had grown by 472 GWth, which again made it the largest for solar energy in the world. The one for photovoltaic systems gained 402 GWp to become the second-largest, and 5 GWel was enough for concentrating solar power to rank third, according to the latest Solar Heat Worldwide report. The report also highlights the rising use of megawatt-class solar heating and cooling solutions for large public and residential buildings, as well as factories. It was launched at the end of May by the IEA Solar Heating and Cooling Programme (IEA SHC). Lead author is the Austrian research institute AEE INTEC.
Source of all figures: Solar Heat Worldwide
In 2016, the global solar thermal industry employed 708,000 people and generated a total turnover of EUR 16 billion, or USD 19.2 billion, the report shows. Containing data on 66 countries, Solar Heat Worldwide is the most comprehensive annual assessment of solar heating and cooling markets and has a solid reputation among global organisations, including REN21 and the International Renewable Energy Agency.
Solar district heating (SDH)
“More and more countries recognise that solar thermal district heating is the most cost-effective way to decarbonise the heat sector,” Ken Guthrie, Chair of IEA SHC, said. Last year was the first to see SDH systems above 500 m² (350 kWth) coming online in Australia,  France, Kyrgyzstan and Serbia. Altogether, the report shows 15 new large-scale solar thermal installations, most of them in established markets, such as Austria, China, Denmark, Germany and Sweden.
For the first time Solar Heat Worldwide reports about parabolic trough collector systems that supply district heating networks. The largest system to date is a 75,000 m² field, which started up in October 2016 in Inner Mongolia. It is followed by a 26,929 m² installation in the Danish municipality of Brønderslev.
At the end of 2017, the number of large-scale solar thermal systems stood at 296, and their collector area added up to 1,741,344 m² (1.2 GWth). Since this is only 0.3 % of the total global capacity, there is obviously still much potential for growth.
Residential sector under pressure
Due to increasing competition with other renewable technologies in the residential sector and the continuously low fossil fuel prices throughout 2017, new installations in China and Europe declined. The global solar thermal capacity added last year was about 35 GWth, a 4 % decrease compared to 2016.
However, growth was recorded in India (26 %), Mexico (7 %) and Turkey (4 %). All three countries have cost-competitive residential solutions and buyers receive no direct subsidies. Consequently, India and Turkey had the lowest prices for solar hot water, amounting to between 0.02 and 0.03 EUR/kWh, based on the levelised cost of heat calculations found in chapter 5 of the report. France was the most expensive market, showing 0.19 EUR/kWh for small and 0.14 EUR/kWh for multi-family systems, and Denmark the second-most expensive one at 0.16 and 0.12 EUR/kWh, respectively.
Other key trends
Every year, the authors of Solar Heat Worldwide send questionnaires to SHC specialists in more than 60 countries, asking them about not only the news capacity installed, but also which proportion of it refers to a specific application and collector type. Information from this vast database has been used to create the following charts showing figures for 2016: 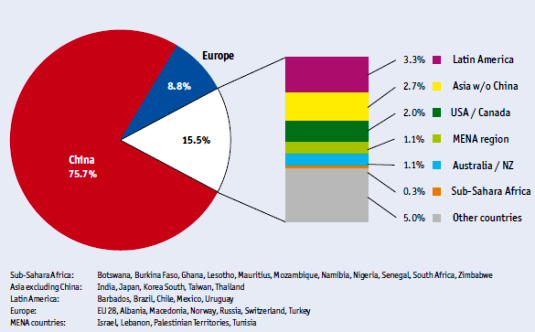 Proportion of newly installed capacity, including glazed and unglazed solar hot water and air collectors, by world region: China and Europe were again the largest markets. 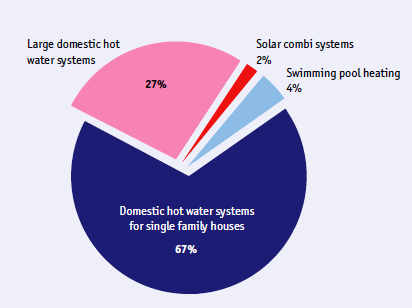 Solar thermal systems in multi-family houses, hotels and schools contributed as much as 27 % to the solar heat total produced around the globe. The solar water heater market for single-family houses saw a slight reduction. Swimming pool heating and solar combi systems were niche markets. 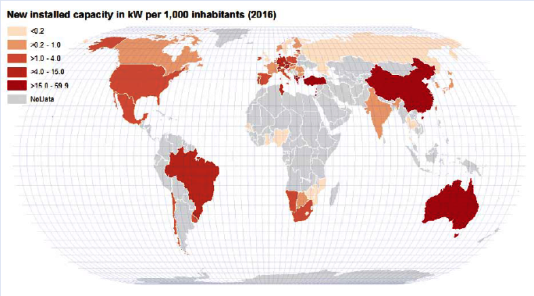