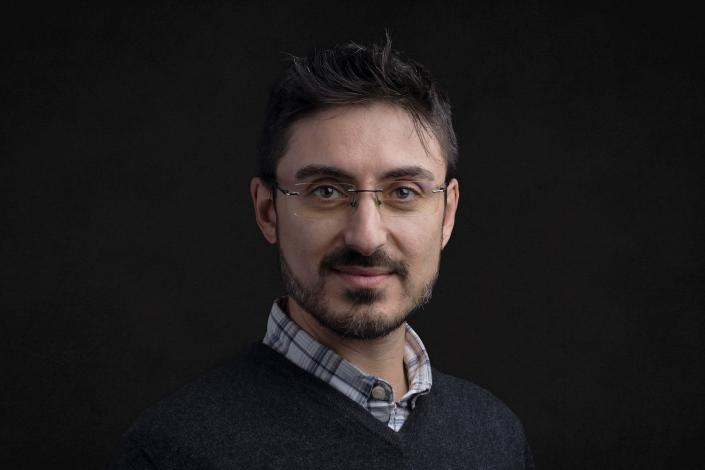 Which research and innovation priorities need to be set for buildings, industry, cities and districts to boost the renewable heating and cooling market? The new Strategic Research and Innovation Agenda for Climate-Neutral Heating and Cooling (SRIA) aims to answer this question by outlining a path to a fossil fuel-free heating and cooling sector across Europe by 2040. Instead of advancing individual technologies, it focuses on improving the investment environment, thereby promoting a market rather than a technology pull. We spoke with R2M Solution’s Marco Calderoni, Chairman of the European Technology and Innovation Platform on Renewable Heating & Cooling (RHC-ETIP), the initiator of the RHC SRIA.
Often, the first thing people think of when someone brings up the topic of a decarbonised economy is not renewable heating and cooling but clean electricity. Is there a way to change this?
Calderoni: It’s an unfortunate reality that our voice is not heard as loudly as that of other lobbying organisations, though we’ve gained deep insights into the decarbonisation process. While we at the RHC-ETIP have been advocating the use of renewable heating and cooling (RHC), we don’t exclude other technologies. To get to fully renewable heating and cooling by 2040, we must exploit all locally available clean sources of energy. These include biomass, solar thermal, ambient and waste heat. We also have to develop networks that can supply energy if local sources cannot meet demand, either for technical or economic reasons. In a future energy system, RHC, RES electricity and green hydrogen will all have a part to play. RHC technologies will not only meet most heating and cooling needs but also play an important role in energy systems integration, especially through heat pumps and thermal storage. While this is obvious and well-known, the connection between electricity grids and small thermal storage has yet to be highlighted as much as it should be.
What measures do you expect local, national and European authorities will have to take to achieve 100 % clean heating and cooling as soon as possible?
Calderoni: We have a lot of expectations of the EU and public authorities in member states. To name a few of them: First of all, actions to reduce fossil fuel consumption to zero must be coordinated. It would likewise be useful to have ambitious, clear and effective policy instruments and risk-sharing schemes for investors, utilities, and public authorities. And new energy tariffs that encourage and reward eco-friendly user behaviour could become essential to improving consumer and public trust in RHC. The amount of government RHC research and development should be increased as well, for example, by coordinating more research programmes within and between EU member states. Plus, RHC research and innovation budgets should be separated from those funding electricity projects. Lastly, stimulating private-sector investment could also prove hugely beneficial.
According to the SRIA, RHC technologies provide ample opportunities for synergy. Could you specify them?
Calderoni: The most sustainable and logical solution to the challenge of establishing a new energy system is to use a mix of technologies, primarily exploiting locally available RES. This way, we could overcome the limitations of individual RES sources and technologies. A solar thermal plant delivers much more heat in summer than in winter, but coupled with other RES, it can be designed to meet demand all throughout summer, while other RES, such as geothermal or bioenergy, can supply the bulk of the heat in winter. This is true for not only individual buildings but also entire industries and districts. Additionally, storage and smart control strategies will be essential to ensuring the highest possible efficiency.
An R&D budget of EUR 2 billion a year will be crucial to achieving the full potential of RHC. Which other macroeconomic factors are important here?
Calderoni: Each year, Europe imports over 400 billion m3 of fossil fuels. A good deal of the related investment goes to oil, gas and coal-extracting countries and to multinationals, many of which are not based in the EU. In an RES-based energy system, those resources would remain in Europe to a much higher extent. This is especially true for RHC systems, which are predominantly manufactured in EU countries. 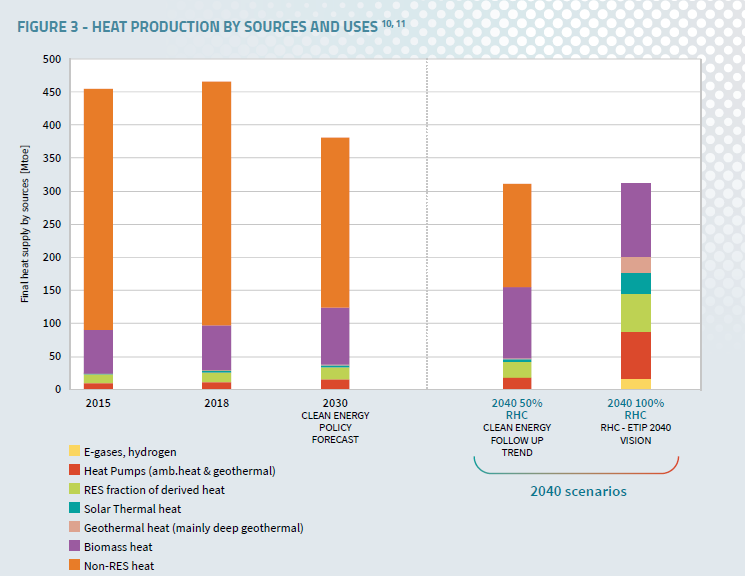 Future share of heating and cooling sources according to deployment potential
Source: RHC SRIA
Which role will district heating and cooling (DHC) play in ETIP’s 100 % 2040 Vision?
Calderoni: One obstacle to RES uptake is space availability in the built environment. DHC networks can produce RES heat where space is available and transport it to end users. These networks require limited public investment and they can transport thermal energy over great distances while keeping energy losses low. Solar thermal systems make use of building surfaces, but if that’s not enough and cities own some large pieces of undeveloped land close by, solar collectors can be installed there. The heat these collectors generate can then be transported to as many buildings as needed. Several well-known Danish solar district heating systems have shown that the concept is feasible both from a technical and an economic standpoint. What DHC share you need depends on the country and the hypothesis used in simulations and can be up to 50 % according to heatroadmap.eu.
What R&I priorities could boost the market uptake of RHC technologies at the building, industry, city and district level?
Calderoni: In the case of individual buildings, R&I priorities are, for example, to integrate RE systems into building envelopes and develop new PVT solutions to generate electricity, heat and cooling. As for district heat, I would like to point you to solar thermal booster stations. In the industrial sector, we need solar heat above 150 °C in combination with other energy generation facilities, including high-temperature heat pumps and geothermal systems. Lastly, it is also possible to combine solar concentrating collectors operating above 250 °C with high-temperature storage based  on molten salt or solid sensible materials.
Which market conditions could be crucial to giving Europeans a greater number of affordable and sustainable heating and cooling choices?
Calderoni: There should be innovative business models and financing schemes such as solar heat supply contracts, also called ESCO models. Affordability will strongly depend on policy. At present, RHC systems have higher upfront costs, but are cheaper than conventional technologies when you look at how much you have to pay over their lifetime. If you take fossil fuel prices into account but remove fossil fuel subsidies from the equation while including subsidies for RHC technologies, RHC becomes far cheaper than fossil energy in every way.

Each RES-SRIA subsection ends with a box describing the Desired Results. The box above is taken from the chapter “Research and Innovation Priorities for RHC in Buildings”
Source: RHC SRIA
The SRIA puts a special focus on renewable cooling. Could you elaborate a bit on where you see the solar cooling market heading in the near future?
Calderoni: Solar cooling is overall very appealing because cooling demand perfectly matches solar irradiation availability. Peak loads due to air conditioning in summer lead to high electricity bills and can even cause blackouts. Using thermal-driven sorption chillers to meet a portion of this electricity demand in summer would therefore have great advantages.
However, so far, the barriers to solar cooling use have been the relatively high consumption for heat rejection, a lack of skilled local maintenance staff because of the small size of companies producing low-temperature sorption chillers, and high initial equipment costs. Most of these barriers could be overcome if EU institutions and member states pushed for renewable cooling and helped increase the industry’s size and expertise.
Interview conducted by Franz Stier, a Sofia-based freelance journalist working for print and online media and news agencies: www.socb.de
Organisations mentioned in this article:
https://www.r2msolution.com/
https://www.rhc-platform.org/
Download RHC-SRIA: https://www.rhc-platform.org/content/uploads/2020/10/RHC-ETIP-SRIA-2020-...
News
District Heating
Domestic Hot Water and Heating
Europe
decarbonisation
European Copper Institute
EU Policies
Strategic Research and Innovation Agenda
R2M Solution
RHC-ETIP