On 18 June, work on a new solar field for district heating started in the Danish town of Grenaa, on the east coast of the Jutland peninsula. The municipality said the existing 12,000 m2, or 8.4 MWth, system had been running to everyone’s satisfaction since 2014. In May, it inked a deal for another solar field measuring nearly 21,000 m2, or 14.7 MWth, to be delivered by Finnish-based flat plate collector manufacturer Savosolar as a turnkey installation. The aim of the expansion is to use solar thermal energy to meet demand for district heating between May and July, so that the wood chip boilers can be turned off during the same period.
Photo: Grenaa Varmevaerk

According to Grenaa Varmevaerk’s website, the new solar system would produce 9,400 MWh a year, which corresponds to a specific annual yield of 468 kWh/m2. Together, both plants could then meet nearly 10 % of the annual district heat required by the town of about 14,000 people, 95 % of which live in buildings connected to the network. Once the system is complete, all of them will be able to shower by using solar heat during the summer months.
The EUR 3.5 million project was announced by Savosolar, a solar energy company listed on the stock exchange, on 29 May. It has been the manufacturer’s largest to date, both in size and contract value. Reportedly, the system will be built in partnership with Danish-based Verdo Energy as early as this year, while commissioning is scheduled for February 2019. “Together with our partner, Verdo Energy, we have succeeded in offering a competitive solution,” Jari Varjotie, Managing Director of Savosolar, said. To fund the large undertaking, the company’s board of directors decided on a capital raise in May, aiming at up to EUR 3.3 million by 10 July. 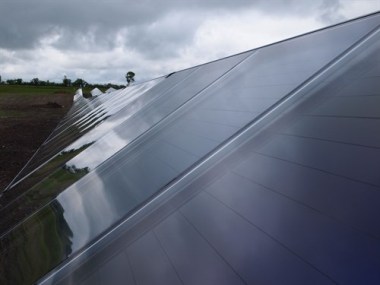 Savosolar collectors, with direct-flow aluminium absorbers, installed in Jelling, Denmark
Photo: Jelling Varmevaerk
In 2011, Savosolar created a direct-flow absorber entirely made of aluminium, with several multiport extruded sections being coated in-house. These sections, likewise part of heat exchangers for automotive applications, offer a wider surface area to transfer thermal energy, with little space between the coated surface and heat transfer fluid. Both features increase collector performance, as shown by Solar Keymark data analysed as part of this news article.
Savosolar said that it had signed another two contracts for larger solar fields in the previous weeks. French-based NewHeat, a solar thermal project company, had requested 4,000 m2 for an industrial facility in the south of France. The installation is said to be commissioned by the end of the year. On 5 July, it had additionally entered into an agreement with Danish municipal utility Jelling Varmevaerk to expand a solar district heating system for EUR 0.7 million. Savosolar had already built a 15,290 m2 solar field for the town in 2016.
Organisations mentioned in this article:
https://www.grenaa-varmevaerk.dk/
https://www.verdo.com/int
www.savosolar.com
www.newheat.fr
www.jelling-varmevaerk.dk
News
Process Heat
Denmark
Finland
Greena Varmevaerk
Verdo Energy
New Heat
Jelling Varmevaerk