Two hospitals in the adjacent municipalities of Gostynin and Płock in central Poland will be supplied by solar heat by the end of the year. Lucyna Koper, Project Coordinator at the Marcin Kacprzak Regional Hospital in Płock, confirmed that the two projects “have already entered the implementation phase and will be commissioned by the end of 2016. We have already signed the delivery contracts.” The installation will be carried out by a consortium of local companies, consisting of sanitary expert Envirotech and two installation companies specialised on renewable heating systems, Eco-Therm and Wachelka Inergis. The installers had already set up an 803 m2 system for the Pomeranian Centre of Traumatology in Gdańsk (see photo) some years ago. The trauma centre, which has more than 600 beds, had the collectors installed across several roofs of the building complex.
Photo: Eco-Therm
International engineering company Ove Arup & Partners International, which is managing projects all around the world, was asked to design and plan the solar combi system providing hot water as well as space heating. The investment at the two hospitals amounts to a total of Polish Zloty (PLN) 6 million (EUR 1.4 million). According to current planning, the collector field at the hospital in Płock will measure 1,068 m2, whereas the system at the hospital in Gostynin will have 325 m2. Both hospitals follow a zero-energy balance strategy. The two municipalities are located in the country’s central region of Mazowieckie, a bit under 110 kilometres away from Poland’s capital Warsaw.
Solar systems part of various regional infrastructure projects
According to an article published by local news site rdc.pl on 22 January 2016, the solar installations had been planned as part of a number of key infrastructure investments authorised by the regional authority of Mazowieckie, for example, the renovation of pavilion No. 7 at the psychiatric hospital in Gostynin-Zalesie. The solar thermal project would be financed by the Swiss-Polish Cooperation Programme, also known as Swiss Contribution, a non-returnable financial aid programme for the enlarged European Union.
“The hospital in Płock is one of 12 hospitals in the Mazowieckie region to get such a solar thermal system,” Marta Milewska, the spokesperson for the administrative body of the Mazowieckie region, told solarthermalworld.org.
Public investments as major driving force
Polish analysts say that renewable energy investments by Poland’s local authorities, such as the projects in Gostynin and Płock, could become one of the major driving forces of the country’s solar thermal energy industry. The sector has been struggling with fewer sales after the government radically changed the requirements for the national residential subsidy scheme, Prosument. 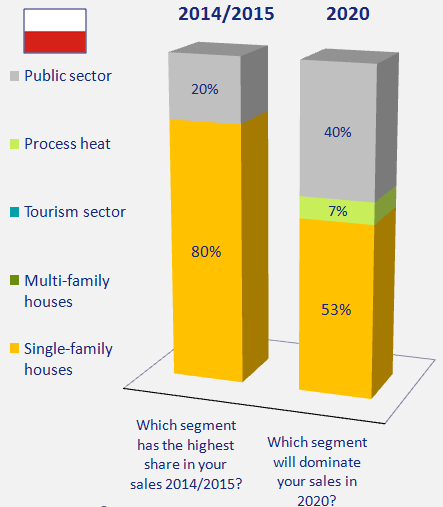 Results of 2015 industry survey carried out by solrico
The noticeable shift in the Polish market toward the public sector was also confirmed by the latest survey which was carried out by German agency solrico in September and October 2015 among solar thermal manufacturers and importers in Poland. Regarding 2014/2015, 20 % of the participating companies ticked the public sector as their main sales channel versus 80 % choosing the residential sector. The same question referring to 2020 resulted in 40 % of the companies assuming that the residential sector will have the highest share in their sales and single-family homes were only chosen by 53 % of the companies as their main sales channel.
“We predict the market to develop toward large-scale investments because of little support for individuals and single-family homes,” a brand manager of a solar water heater importer summed up the situation in the aforementioned survey.
The article was written by Jaroslaw Adamowski, a freelance journalist based in Warsaw, Poland.
Websites of companies mentioned in the article:
Envirotech: http://envirotech.com.pl/en/company/
Eco-Therm: http://ecotherm.com.pl/
Wachelka Inergis: www.inergis.pl/en
Ove Arup & Partners International: www.arup.com
Solrico: www.solrico.com
News
Domestic Hot Water and Heating
Poland
hospitals
Eco-Therm
Wachelka Inergis
Envirotech
Solrico
Ove Arup & Partners International
Swiss Contribution