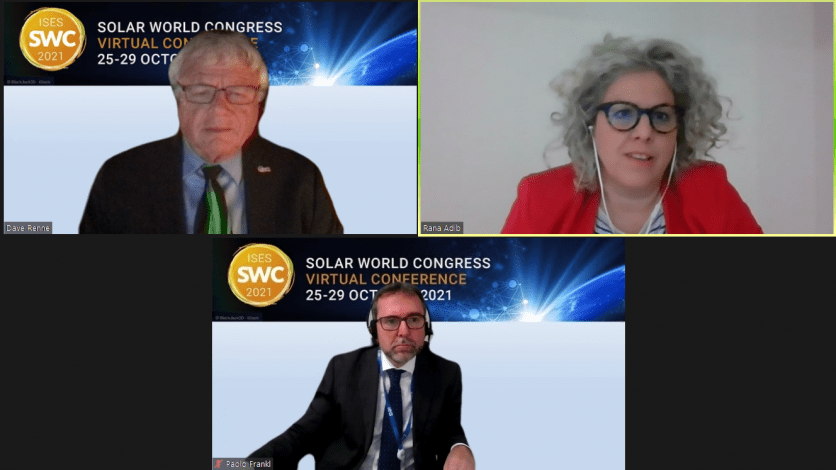 “The world is burning more fossil fuels than ever. We need deep structural change,” REN21 Executive Director Rana Adib warned attendees at a panel discussion at last week’s Solar World Congress. “It is not enough anymore to look at the energy supply side – that is, the power sector – but we must tie the energy transition dialogue much more to the energy demand side and to infrastructure.” The other member of the panel, Paolo Frankl, Head of the IEA’s Renewable Energy Division, confirmed that industry is one of the “really hard-to-abate end-use sectors” because investing in energy infrastructure will not lead to immediate results. The panel session, which covered the major challenges on the path to a 100 % renewable future, was moderated by Dave Renné, formerly President of the International Solar Energy Society. ISES organised this year’s Solar World Congress and welcomed the IEA Solar Heating and Cooling Programme as a key partner of the event, which took place online between 25 and 29 October.
Screenshot from the plenary session Status and Trends, Major Challenges and Pathways to 100 % Renewables
The following two charts, taken from the presentations given at the event, further corroborate the statements quoted in the introductory paragraph: 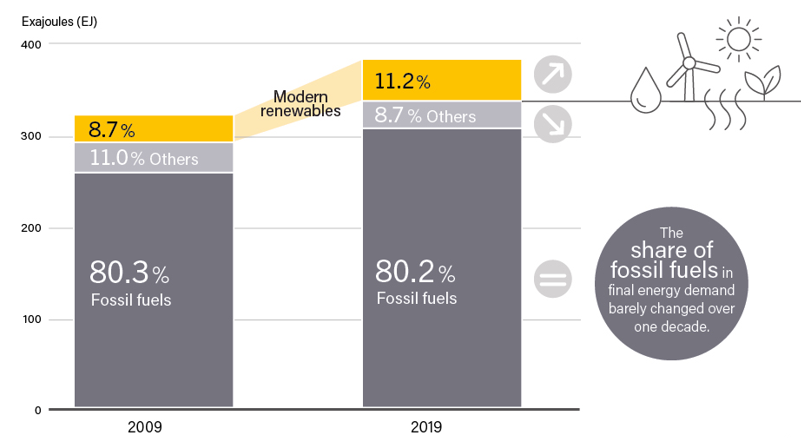 Adib went on to explain that the deployment of renewables has accelerated over the last 10 years, with the RES share in total final energy consumption growing from 8.7 % to 11.2 %. However, at the same time, overall energy demand has increased as well so that the world is now actually burning more fossil fuel than ever before. Figure: REN21

Frankl then brought up the huge challenge of reducing emissions worldwide. What the Paris Agreement did was to stabilise annual emissions. Now, as illustrated by the yellow section in the chart above, the very important pledges announced for the Climate Change Conference taking place in Glasgow in the coming weeks are expected to lead to a fundamentally important drop in global GHG emissions. But if the goal is net-zero emissions by 2050, a huge gap still remains. Hence, while clean electricity can do a lot of the heavy lifting, Frankl said, it will be harder to bend the emission curve in industry and transport. Figure: IEA 2021: Net Zero by 2050
Reduce carbon footprint of factories
The hard-to-decarbonise industrial sector was also a topic of conversation during the Q&A part of the session, when the panellists were asked which policies they would recommend in order to encourage or incentivise manufacturers around the world to start reducing the carbon footprint of their factories.
Adib: In the industrial sector, which mainly requires low- and medium- temperature heat, we need to raise awareness of the fact that technological solutions for clean heat generation already exist. The other important aspect is that governments must provide the right political and regulatory framework – similar to what has been accomplished in the power sector. One positive development we have seen unfold over the past years is that the private sector has taken steps to promote social and environmental governance. And interestingly enough, we have observed that by going down this path, companies have also had an impact on the development of supply chains.
Frankl: The industrial sector is a tricky one and among the most difficult to decarbonise given the long investment cycles for new energy infrastructure. Policies in this area need to satisfy one of three requirements:
Jointly expand the role of solar energy in different sectors
IEA SHC started organising International Solar Heating and Cooling (SHC) Conferences in 2012. In 2017, it entered into a partnership with ISES to organise SHC conferences and Solar World Congresses. Their first joint event took place in Abu Dhabi, United Arab Emirates, the second in 2019 in Santiago in Chile. In his opening speech, IEA SHC Chair Tomas Olejniczak said that the organisations’ partnership has been “highly successful.” The long-term appeal of the Solar World Congresses, which attract representatives from all across the renewable community and present the latest in renewable technology, and the IEA SHC’s vast network of solar thermal experts has proved to be a good combination for jointly expanding the role of solar energy in different sectors. The IEA SHC strongly supports ISES’ 100 % renewable energy goal and will continue the IEA SHC Solar Academy webinars regularly hosted by the International Solar Energy Society.
Organisations mentioned in this article:
https://www.ises.org/
https://www.swc2021.org/
https://www.iea-shc.org/
https://www.iea-shc.org/solar-academy
News
Process Heat
Finance and Incentives
Policy
global
Solar World Congress
Net Zero by 2050
SHC Conference
IEA
REN 21
IEA SHC
ISES