Despite its small size, the solar district heating system in Lodi, close to Milan, is one of few in Italy to feed surplus heat into a local network. In March 2017, Linea Reti e Impianti, the public utility based in this city of 45,000, started buying heat produced by a 192 m² solar thermal installation. The system is owned by Sporting Lodi, a public-private partnership that operates the local sports centre, which includes a swimming pool (see photo). Marco Calderoni, a researcher working at the Politecnico di Milano, and his colleagues have recently suggested using a new approach to reduce the supply temperature in the solar circuit to increase performance. This article is based on a presentation given by Calderoni during the 5th International Solar District Heating Conference in Graz in April.
Photo: Linea Reti e Impianti
The local district heating, or DH, network is 25 kilometres long and provides about 200 buildings with thermal energy, which corresponds to around 60 GWh of distributed heat per year. Heat sources include a gas- and biomass-fired CHP unit and a solar thermal system installed at the sports centre’s swimming pool.
The idea to connect the solar field to the local district heating network was born when the efficiency and annual energy yield of the system dropped to unsatisfactory levels. This happened after major changes had been made to the pool buildings and the installation turned out to be oversized for the new layout.

Schematic diagram showing the integration of the solar thermal system into the DH network
Source: Politecnico di Milano
Control strategies and temperatures
Despite the connection, the energy yield turned out to be lower than expected. In cooperation with the Energy Department of the Politecnico di Milano, Linea conducted an analysis of the monitoring data available for the entire period since March 2017 to better understand why performance was so poor and to suggest a course of action.
For instance, between May and June last year, the solar system supplied the network with around 13,600 kWh. This means efficiency was at 33 %, partly because of long pipelines, which generate a loss of about 10 %.
After analysing the control strategies Linea had devised for the solar loop, the university researchers determined the main reason for the system’s low performance: The ‘T5’ temperature, i.e., the temperature at the heat exchanger outlet (see the diagram above), had remained too high in the intermediate loop between solar system and DH network. High T5 values also increase the supply temperature in the collector loop and reduce collector efficiency.
In the event of a low flow rate, the current strategies result in hot water being drawn from the DH return line, after which it is mixed with water from two other heat exchangers (HXS1 and HXS2, see diagram) and transferred to the HXS. The utility’s aim was to maximise the HXS flow rate at low demand, to cool the solar loop and avoid stagnation. The measure, however, has had unfortunate side effects.
Room for improvement
Based on a TRNSYS simulation model, the researchers investigated the possibility of optimising current strategies without generating additional costs. The idea was to reduce the above-described flow rate until it matches the one on the demand side, which would prevent hot water coming from the DH return pipe from being mixed with the flows exiting HXS1 and HXS2. It would also lower the inlet temperature of the HXS. In the simulated environment, solar field efficiency rose from 33 % to 43 % and energy output by about 30 % (see the chart below). 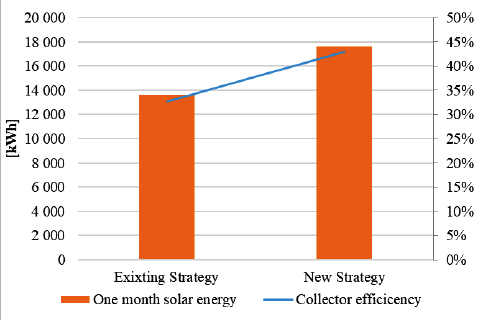