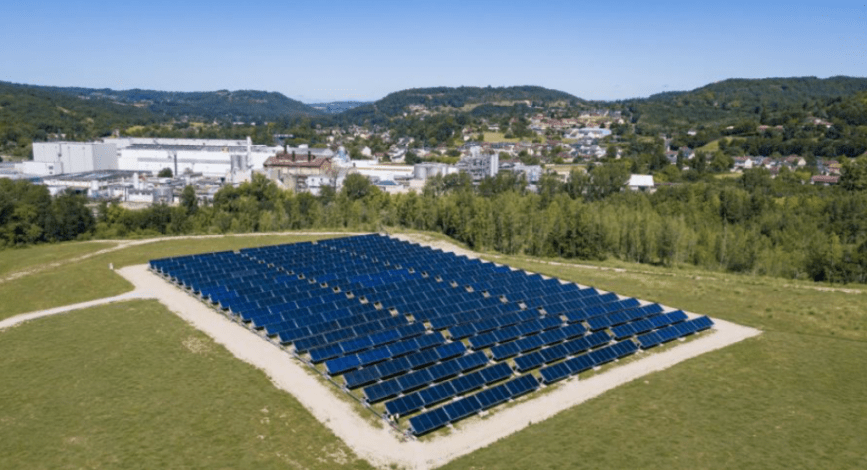 French project developer NewHeat has successfully closed a EUR 13 million finance deal with Triodos Bank, Germany, and Crédit Coopératif, France, to cover the costs of putting up five solar heat plants with a total capacity of 28 MWth. The project pool comprises the industrial solar heat plant started up at the Condat paper mill in January 2019 and four ready-to-build installations, two for district and two for industrial heat. French financial advisory boutique Finergreen helped secure the funding.
Photo: NewHeat
The projects represent a tremendous step forward for NewHeat and the solar heat market as a whole when it comes to proving the feasibility of the technology and securing the trust of lenders, stated the company’s press release sent out on 10 September. NewHeat partnered with two banks that focus on sustainable investing and support the creation of an economy providing great social and environmental benefits. “We are particularly delighted to have found bank partners whose social goals align with ours and regional co-investors, which shows how our projects provide local integration and jobs,” NewHeat CEO Hugues Defréville said in the press release.
France’s go-to bank for financing large plants
German Triodos Bank played the role of the arranger, the main lender, that conducts negotiations and transactions and was 'followed' by the French Crédit Coopératif. In the press release mentioned above, Daniel Domingues, Crédit Coopératif’s Business Development Director, said NewHeat’s projects mark a major step forward for France’s clean energy sector and its solar heat market in particular, adding that the bank is proud to become the go-to source for financing large solar heat installations.
NewHeat also has chosen to involve three new minority shareholders: the regional investment funds Terra Energies, ENR Oser and AREC Occitanie.
Emmanuel Julien, President of Terra Energies, said that the projects impress in more ways than one. Thanks to their significant generation capacity, they will prove that renewable heat can play a key role in transforming the energy system. In addition, they represent the first collaboration between three regional investment funds in France. And last but not least, the partnership is a win-win for all who contribute to it and, most importantly, for the planet.
In June, Finish collector producer Savosolar announced it signed an agreement with NewHeat for the delivery of two solar district heating plants, which are now part of the loan agreement. One consists of around 3,000 m2 of solar collectors and will be built for the public utility serving Narbonne, a town in Occitanie, southern France. The other will be put up in the city of Pons, Nouvelle-Aquitaine. The contract value of these systems is EUR 1.55 million, according to Savosolar.
The two solar industrial heat plants with in the project pool will go to large industrial clients in the French regions of Grand Est and Auvergne-Rhône-Alpes, the NewHeat press release said.
For all five projects, NewHeat uses a project business model called special purpose vehicles (SPVs), established in renewable IPP project circles. In this case, NewHeat is the developer and turnkey builder of the project, while the SPV buys the turnkey project from NewHeat, owns the assets, signs the heat delivery contract with the heat consumer and operates the solar heat project. NewHeat remains the majority shareholder of all these SPVs.
Organisations mentioned in this article:
https://newheat.com/fr
https://www.triodos.de/ (in German)
https://www.credit-cooperatif.coop/Institutionnel (in French)
https://www.terra-energies.fr/
https://www.arec-occitanie.fr/
https://enr-oser.fr/
https://www.finergreen.com/
https://savosolar.com/fi/
News
Finance and Incentives
France
Germany
Finland
European Copper Institute
market opportunities
NewHeat
Triodos Bank
Finergreen
Credit Cooperatif
Savosolar
Terra Energies