Last December, Shandong-based Sanqiaoneng introduced a new line of absorber plates, which had taken five years to develop. According to the company website, Singaporean investment holding company Rowsley had spent USD 5 million on the design of a selective coating for these metal plates. Professor He Tao from the China Academy of Building Research (middle of the photo), visited Sanqiaoneng’s coating plant in late January.
Photo: Sanqiaoneng
Sanqiaoneng, founded last March, employs magnetron sputtering to apply the new selective coating onto stainless steel plates, type SUS444. The plates are then impulse welded before being put inside the collectors. Ruicheng Zheng, who works at the China Academy of Building Research, affirmed that the material has been tested by the National Centre for Quality Supervision and Testing of Solar Heating Systems in Beijing. However, the results are not available to the public.
The aim is to offer solar heating and cooling solutions to commercial customers. Marketing Manager Zhang Qinglong said that Sanqiaoneng’s first larger solar heating system had been commissioned in late 2017. In all, 1,000 m² of collector area had since been used to provide heat for staff flats. The company’s website also lists a reference project in Taiyuan, the capital of Shanxi province, where a solar field comprised of flat plate collectors supplies heat at a pig breeding farm. 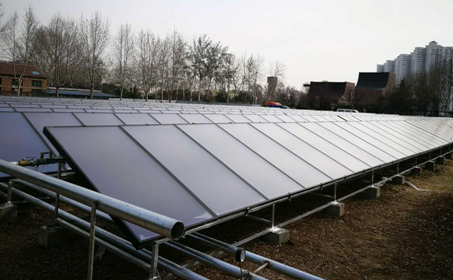 The Shandong Xiaoya Group uses 934 flat plate collectors of 2 m² each to heat office space.
Photo: Xiaoyasolar.com
In addition, Qinglong has announced a renewable energy demonstration project at the household appliance manufacturer Xiaoya in Jinan, in Shandong province. The company has installed a system combining heat pumps and solar energy to supply hot water and space heating to offices which occupy 11,000 m² of floor space. The Shandong Xiaoya Group aims to become a business showcase for green thermal energy use and allow for the “on-site generation of hot water during the entire year, heating in winter and cooling in summer”.
As reported on the province’s news page – iqilu.com – the project had been launched on 19 January, at the time the air source heat pump had come online. In April, a flat plate collector array measuring 1,868 m² had additionally started to provide thermal energy for hot water and underfloor space heating in the building.
The news article posted to iqilu stated that the third stage of the project would see the addition of a solar thermal cooling system, including a lithium-bromide chiller, and a 5 MWp photovoltaic one for on-site electricity consumption. The latter would be installed on the roof and wherever space would be made available.
Organisations mentioned in this article:
http://www.sanqiaoneng.com/
http://www.cabr-sh.com/about_en.aspx
News
Domestic Hot Water and Heating
Solar Cooling
China
Singapore
absorber coating
selective coatings
Sanqiaoneng
Rowsley
China Academy of Building Research
National Centre for Quality Supervision and Testing of Solar Heating Systems
Xiaoya Group