The first-ever Intersolar Mexico, which took place in early September, offered a platform to promote solar heat in more ways than one. On the third of this month, a Solar Heat Workshop drew in over 40 industry professionals (see photo). Furthermore, the Heat Changer Challenge was kick started with five committed participants who dedicated themselves to promoting solar heat by setting end-of-year aims. In addition, a film crew from Germany produced a 5-minute video on Mexico’s market for industrial solar heat. The video, which is available in English,
German and Spanish, includes a visit to parabolic trough collector manufacturer Inventive Power and a dairy that is using the manufacturer’s technology.
Photo: matters.mx
“We had an interesting mix of attendees at the Solar Heat Workshop,” said Marisol Oropeza, Director of matters.mx, the firm which organised and moderated the conference. “We were joined by representatives for several companies that want to branch out into solar heat and by representatives for potential customers, such as mining corporation Grupo Mexico,” she added. Each speaker at the workshop introduced one of the solar thermal support schemes offered in the country. Among them were the Solar City programme in Mexico City, the MiSol scheme in the hotel industry and the Solar Payback project to support industrial solar heat systems. 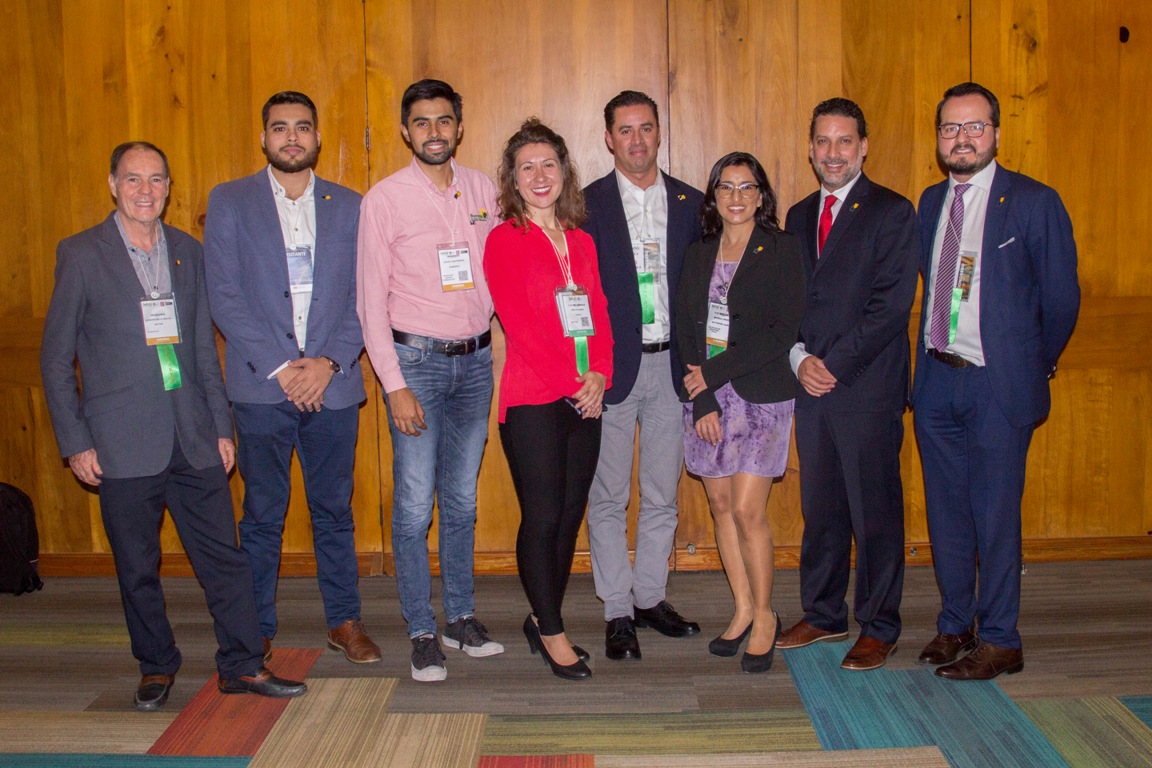 This photo shows both the speakers at the Solar Heat conference and the three participants in the Heat Changer Challenge.
Photo: matters.mx
The Heat Changers campaign used the opportunity presented by the Intersolar Mexico to start the Heat Changer Challenge, with the aim of engaging with the solar community and raising the profile of solar heat. Five participants presented their personal aims during the conference and received valuable feedback from the audience. They pledged to implement their plans within the next three months, until the end of the year.
“We were deeply impressed by the commitment of the volunteers who discussed their ideas at the conference. It proved to us that they are putting a great deal of trust in solar heat and want to bring the technology into the spotlight,” explained Oropeza, who is coordinating the Heat Changers campaign. For example, Leonardo de la Hidalga (first from left) plans to make short videos on the topic and Antonio Mar (second from left) wants to popularise solar heat in the service sector and build trust in the technology, while David Contreras (third from left) has created a digital map to which he is adding new solar thermal systems on a regular basis. And Claudia González and Didier Cocom (absent from the picture, as they joined the event via remote connection) intend to educate primary school pupils about solar thermal energy. You can follow each project on social media by looking for the hashtag #HeatChangerChallenge. 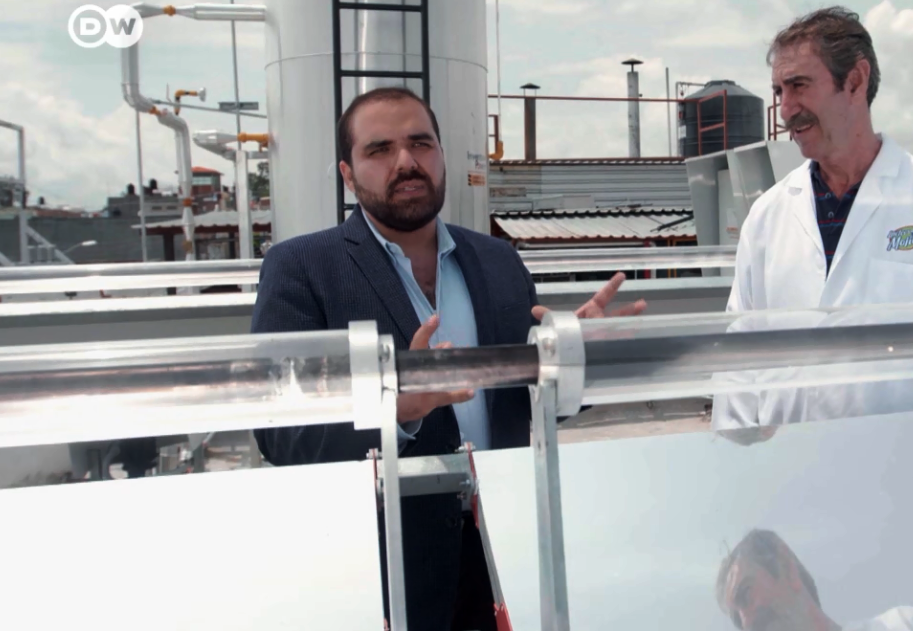 In this photo, Aldo Agraz Huitrón, Technical Director at Inventive Power, and Rigoberto Mojica, owner of cheesemaker Abodera (from left), stand between the parabolic trough collectors on the roof of Abodera’s production hall.
Photo: Screenshot taken from Global 3000’s short film titled Mexico: promoting solar thermal energy
A German film crew working for Global 3000 – The Globalisation Programme of public radio station Deutsche Welle used the event to shoot a short film about the flourishing industrial solar heat market in Mexico. The crew visited a family-run business named Abodera, a solar heat customer on the west coast of the country, together with the managers of technology supplier Inventive Power. The company uses 40,000 litres of hot water at a temperature of 70 °C or more to produce 40 tonnes of cheese a week. In the film, the business’s owner, Rigoberto Mojica, explains he used to spend 80,000 Mexican pesos (roughly EUR 3,700) per month on LPG. After his company started up the 120 m² field of parabolic trough collectors, energy costs are now 30 % less.
Further into the film, Ángel Mejía, Managing Director of Inventive Power, explains why every industrial solar heat project is unique: “It takes time to optimise the business processes and bring about real differences in energy consumption and costs.” His business has already won over more than 100 commercial customers – manufacturers and hotels – and all of them are now enjoying the benefits of solar heat.
Organisations mentioned in this article:
www.matters.mx
https://heat-changers.com/
www.misol.mx
www.inventivepower.com.mx
www.solar-heating-initiative.com
www.intersolar.mx
News
Awareness Raising
Certification
Finance and Incentives
Mexico
Germany
Intersolar Mexico
workshop
Video
Solar City Programme
MiSol
Solar Payback
Heat Changers campaign
Global 3000
matters.mx
Inventive Power
Intersolar Mexico
Grupo Mexico
Abodera