In Europe, positive energy districts are still in their early stages. But initial pilot projects have shown that low-temperature district heating grids play a central role in the design of these smart districts. So far, however, there has been little policy support for PEDs, noted the experts who attended the Positive Energy Buildings and Neighborhoods in Europe: from policy to implementation workshop in late September. The workshop, which was part of last month’s Sustainable Places online conference, was organised by the Syn.ikia EU project, a venture aiming to build a European PED community.
Above all, when it comes to EU legislation, there has been no widely shared definition of PEDs, Zsolt Toth, Senior Project Manager at the Buildings Performance Institute Europe, said during his opening speech. The Nearly Zero Energy Building concept that is part of the Energy Efficiency Directive neither covers nor supports the creation of these districts. “The focus of the last 10 years has been on energy efficiency of individual buildings. But there is a tendency today to go beyond single buildings towards city-wide development,” he added. At the workshop, two abbreviations were used interchangeably: In addition to PEDs, i.e., positive energy districts, presenters also spoke of SPENs, which is short for Sustainable Plus Energy Neighbourhoods.
PEDs (or SPENs) usually combine on-site renewable energy production, storage, sharing and trading. But a number of non-technical benefits are just as important to these projects:

EU project Syn.ikia defines SPENs
One opinion held by all experts at the workshop was that PEDs are close to becoming a mainstream urban planning method. But the speakers also agreed that there are still lessons to be learned from the ongoing pilot projects. Two such PED pilots were presented by Gerlinde Gutheil, of the Austrian Federation of Limited Profit Housing Associations.
Austria’s first smart city district, a 100-hectare mixed-use development called Graz-Reininghaus, has been under construction since 2015 and is scheduled for completion by 2025. It will provide a residential share of 70 % and living space for about 12.000 people. A special focus of the project is on implementing smart solutions that will benefit both residential and industrial energy consumers. One example of this is the on-site use of industrial waste heat to provide residents with hot water and space heating.
The industrial waste heat produced In Graz-Reininghaus will be injected into the local low-temperature district heating network, which is operated at 68 °C, or the city’s municipal district heating grid, which is run at 75 °C to 95 °C. In the latter case, two highly efficient multi-megawatt heat pumps will raise the temperature of the waste heat to the appropriate level. The low-temperature grid will also feature a 1,700 m3 storage tank for a quick response to daily and weekly fluctuations in heat demand. The installation of a 85 kW PV generator will round off the Reininghaus plus energy concept. An innovative feature of the new neighbourhood, Gutheil said, is that its energy efficiency targets are part of private law contracts Graz signed with the investors in the PED. 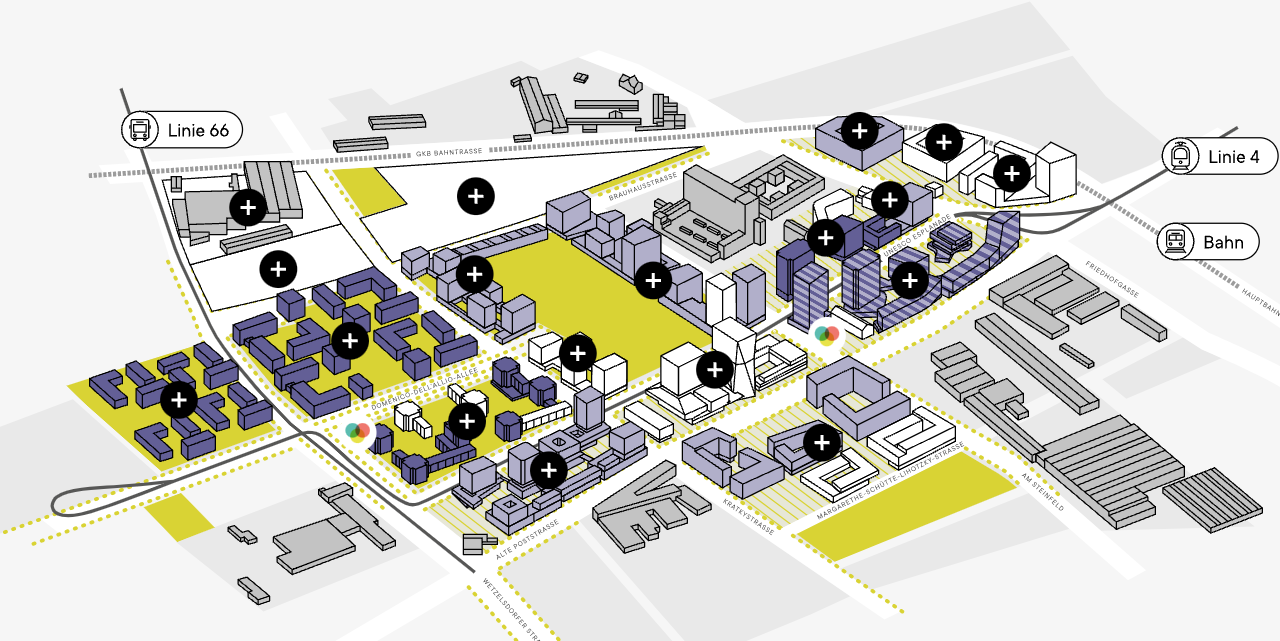 Design study of Reininghaus, a smart energy neighbourhood being built in Graz, Austria. Scheduled for completion by 2025, it will provide living and working spaces for about 12,000 people. Source: xn--reininghausgrnde-vzb.at/
A low-temperature local heat network is also at the heart of the energy concept for Salzburg’s Gneis district. Plans are to use two carbon-neutral renewable sources to heat a mix of new and renovated multi-family buildings in the area. One of them is solar heat, which will be produced on site by rooftop collectors, the other water from the nearby river, in combination with a ground-source heat pump and a PV plant. Gneis is one of four pilot projects analysed and promoted by Syn.ikia.
In her concluding remarks, Gutheil emphasised that PED pilot projects with a clear focus on plus energy targets are still at their early stages in Austria and that there is no legislative framework enabling an integrated approach in the form of PEDs. But as shown by the pilots, PEDs have become part of a social transition process, so the key question is now how to get residents on board with the idea. Overall, there is a great need for guidance on these complex questions in all EU member states.
Organisations mentioned in this article:
https://www.synikia.eu
https://xn--reininghausgrnde-vzb.at/
https://www.bpie.eu/
District Heating
Austria
Europe
Positive Energy Districts
Sustainable Plus Energy Neighbourhoods
European Copper Institute
Solar Heat for Cities