With biomass prices on the rise, solar district heating could become profitable in Lithuania. But without investment grants, payback periods were still too long, it said in the conclusion of a 2015 SDH market study by LEI, the Lithuanian Energy Institute (see the attached document in Lithuanian). The photo shows the country’s first SDH system set up in 2011. Installed on the roof of the boiler house, it preheats water for a wood chip boiler in the district heating station of Dūkštas, a town in eastern Lithuania. The demonstration unit with 82 m² of vacuum tube collectors received funding from international organisations.
Photo: Lithuanian Energy Institute
“Solar thermal systems are still too expensive, meaning they can’t compete with the comparatively low-priced heat from biomass boilers,” said Aurimas Lisauskas, Research Associate at LEI and author of the district heating study conducted during EU project SDHplus (2012-2015). As part of SDHplus activities, Danish-based consultancy PlanEnergi created a feasibility study on an SDH system in a Lithuanian village called Raseiniai (see the attached document in English). The first scenario was based on a stable biomass price over 30 years of operation, which resulted in payback periods of 24 to 25 years. The payback period itself was calculated using a simple formula to divide the saving from operation by the investment.
The assumptions were:
In a second scenario, biomass prices were expected to increase by 1 % annually, as assumed by the Danish Energy Agency, and the solar investment was reduced by 10 %. The results are shown in the chart below. The simple method decreases the payback period to between 19 and 22 years, and solar fields above 15,000 m² offer lower heat prices than the reference case, which relies solely on a biomass boiler for heat production. Optimum solar collector area is at around 22,500 m², but other sizes could also be feasible. 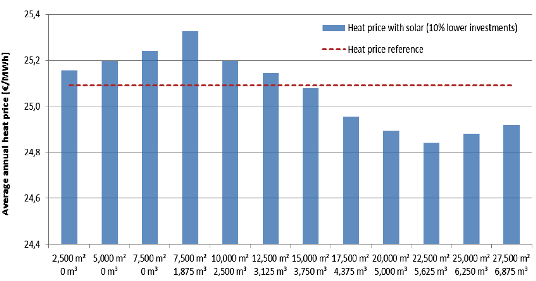 Average annual heat prices, calculated as a combination of heat produced by solar and biomass and at a real interest rate of 3 % over 30 years. The reference heat price is 25.1 €/MWh, provided that heat is produced by a biomass boiler only.
Source: PlanEnergi
Websites of organisations mentioned in this article:
http://www.lei.lt/index.php?k=9
http://planenergi.dk/