Cities and municipalities are thought to play a decisive role in transforming energy systems. Urban planners, municipal stakeholders and consulting firms need case studies to demonstrate that solar energy can be integrated successfully into new and existing urban neighbourhoods. It is why Solar Energy in Urban Planning, an international research group, has compiled data on 34 showcases in 10 countries for its latest lessons learned report (see link at the end of the news article), created under the aegis of the IEA Solar Heating and Cooling Programme.
The group is headed by Maria Wall, a professor at Lund University’s Energy and Building Design department in Sweden, who analysed the case studies based on 10 categories:
The report’s biggest chapter is Approaches, Methods and Tools. “What urban planners desperately need are tools and methods that will support them throughout the complex process of deciding on active and passive solar use and architectural design,” Wall explained. “It is why our research group focused on creating new and innovative approaches to assessing case studies.” The work was led by researchers Gabriele Lobaccaro and Carmel Lindkvist, likewise an associate professor at the Norwegian University of Science and Technology.
Three studies are of particular interest in this context and are described below. 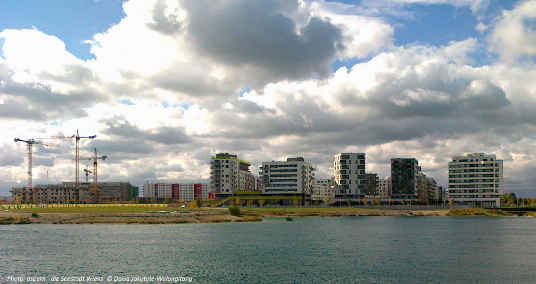 Aspern Seestadt near Vienna, Austria
Photo: Walangitang Daiva
Seestadt Aspern will be a new neighbourhood in Austria’s capital, Vienna, about 13 kilometres east of the city centre. The aim is to create housing and jobs for 20,000 people on 240 hectares by 2028. The approval of the master plan in 2007 marked the start of the project. One remarkable aspect is the timely integration of energy planning into urban design. According to the report, this involved:
Stadtwerk Lehen in Salzburg, Austria, is a new urban housing development on the former premises of the city’s energy provider. It comprises 300 flats, a day care, a student hostel and other buildings on 4.3 hectares, all built between 2009 and 2013. The challenges were to raise energy efficiency and make use of as much solar energy as possible in an area supplied by a district heating grid. Lessons learned from Lehen: To assess whether project goals had been achieved, the entire system, i.e., solar, district heating and microgrid, was monitored at 300 points after completion. 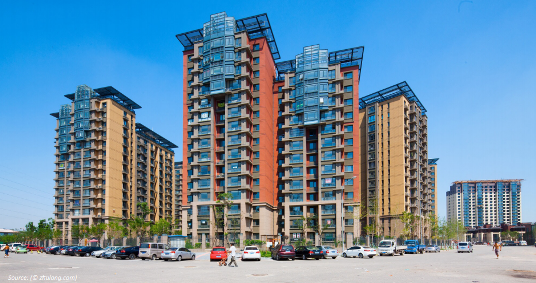 Plot B45 in Bejing’s Fengtai district, China
Photo by Sun Wei. ©2014 Beijing Institute of Residential Building Design and Research Co.Ltd
Plot B45 is a 2.5-hectare area in the new suburb of Changxindian, which is part of the Fengtai district in China’s capital, Beijing. Between 2009 and 2014, nine 11- to 15-storey towers, each equipped with rooftop solar collectors, were constructed in line with China’s regulations on environmental matters and eco-cities. The challenging part was the incorporation of the green roof and solar collectors into building design. Nine central heating systems, including solar storage units, were installed to increase the solar fraction of each tower. The report’s authors emphasise that a large number of methods and tools had been employed to guarantee high-quality living, proper comfort, high energy efficiency and a limited environmental impact. Some of those are:
1. Software and tools:
You can download the reports (see below).
Lessons learned from the case studies (84 pages, 31 MB) described in this article:
http://task51.iea-shc.org/Data/Sites/1/publications/Task51-Report-C3-180...
In all, 34 case studies from 10 countries around the world, namely Austria, Canada, China, Denmark, France, Germany, Italy, Norway, Sweden and Switzerland (416 pages, 75 MB):
http://task51.iea-shc.org/Data/Sites/1/publications/Task51-Report-C1-180...
Case study comparison based on three factors (140 pages, 32 MB):
1. Scale and planning process
2. Legislation and technology
3. Targets and goals
http://task51.iea-shc.org/Data/Sites/1/publications/Task51-Report-C2-180...
News
District Heating
Domestic Hot Water and Heating
Austria
Germany
China
Italy
France
Sweden
Norway
UK
USA
Canada
Denmark
Switzerland
urban solar projects
IEA SHC Task 51
Seestadt Aspern
Stadtwerk Lehen
Plot B45
SCREEN3 Model
Cadna/A
SUNSHINE-V 3.0
SketchUp
PKPM-PBECA V1.0
IEA SHC
Lund University
Norwegian University of Science and Technology
DataKustik GmbH