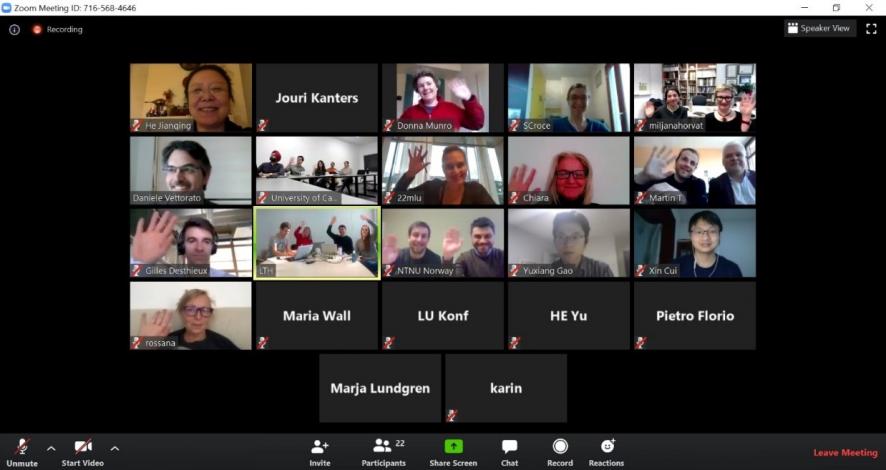 “It worked very, very well and we saved a lot of emissions,” said one of the participants in the two-day online workshop organised by research platform Solar Neighborhood Planning, also known as Task 63. On 11 and 12 March, 42 people based in 10 different countries, ranging from Canada and Sweden to China and Uganda, discussed the work plan of this recently started four-year project supported by the IEA Solar Heating and Cooling programme. The great majority of attending researchers said they truly appreciated the productive exchange and the technically well-organised gathering, according to a survey carried out by its organisers, the team of Professor Maria Wall, who works at the Swedish Lund University’s Architecture and Built Environment department.
Screenshot: Lund University
Wall is the one coordinating Task 63, which aims to support urban planners and architects as well as representatives for municipalities and utilities in putting up neighbourhoods that provide long-term access to solar energy resources and daylighting so as to create a sustainable and healthy environment. Originally, the meeting to discuss the main objectives, key publications and the first steps of Solar Neighborhood Planning was to take place at Lund University in Sweden. The outbreak of Covid-19 around the world, however, forced the cancellation of the face-to-face event. Instead, the workshop was held online via Zoom.
“The new online format is very convenient and efficient,” said Wall. “We will certainly use the online tool to organise more research group meetings, as it reduces our carbon footprint and cuts down on the time and cost usually spent on visa applications and travel.” The most critical issue that needs to be addressed, she added, is the difference in time zones. “We recorded the sessions and shared the links with all researchers in our group so they can listen to what speakers had to say if people were not able to attend the entire meeting,” Wall explained. The Swedish professor also put together a list of lessons learned based on the survey she and her team conducted among attendees:
“Valuable to have met at least once in real life”
The Task 63 members praised the sound and video quality of the meeting, plus the fast and easy way to create subgroups. However, they also underlined that this sort of event did not allow time to meet informally during breaks and lunch. “Online events also make it hard to know if people agree or disagree, since you can’t see their body language,” noted a survey respondent. “The more meetings you have, the more productive they become,” another assumed. “Still, it is quite valuable to have met at least once in real life beforehand.” Wall agrees to the importance of still having physical workshops. Wall also believes it is important to continue having face-to-face workshops. But in between these events, Task 63 will offer online meetings for subgroups to ensure good progress.
More information:
https://task63.iea-shc.org/
https://www.iea-shc.org/
Sweden
Canada
Uganda
China
Solar Neighborhood Planning
Lund University