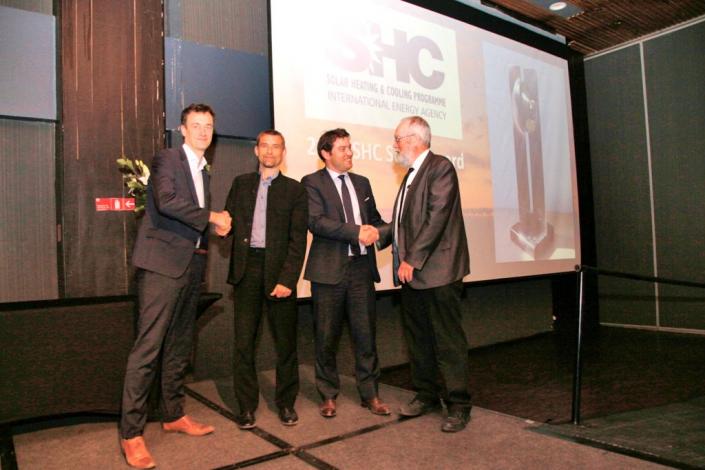 Kyotherm, a French-based third-party investor, has won the IEA Solar Heating and Cooling programme’s Solar Award for financing energy service companies (ESCOs) so end users in the industrial sector can reap economic benefits from day one. The first solar thermal project supported by Kyotherm is a 14,252 m² solar field (10 MWth), which is being put up at a malt business in France. The photo shows (from left) Rémi Cuer, Investment Manager at Kyotherm, Daniel Mugnier, Chair of IEA SHC, Arnaud Susplugas, CEO of Kyotherm, and Ken Guthrie, Chair of the IEA SHC Award Committee, shaking hands at the award ceremony. The award was presented during the closing session of the International Conference on Solar Heating and Cooling for Buildings and Industry, which was held in Santiago, Chile, together with the ISES Solar World Congress.
Photos: Randy Martin, IEA SHC
The SHC Solar Award recognises outstanding leadership or achievements of an individual, a company or a private or public institution in the solar heating and cooling sector. Kyotherm was chosen from six finalists, all of which created successful financing mechanisms. “The low cost of financing has been a key success factor in the rapid development of the photovoltaic sector. We at Kyotherm intend to offer solar thermal project developers an ESCO third-party finance solution that will have the same impact,” explained Susplugas, who founded the company in 2011. The business has set up and funded 70 projects on renewable heat and energy efficiency thus far and between EUR 0.5 million and EUR 50 million have been invested in each of them. 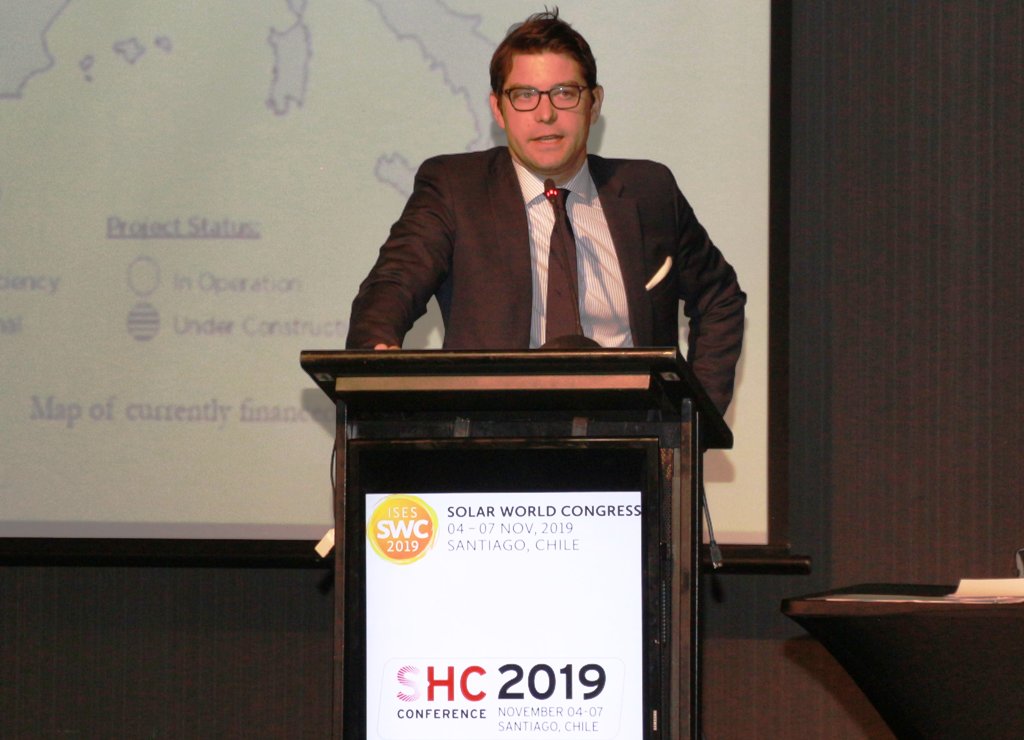 Kyotherm’s CEO, Arnaud Susplugas, giving his presentation at the joint conferences in Santiago
The first milestone in building the SHIP system was reached in September 2017, when Kyotherm entered into a binding agreement with Malteries Franco-Suisses for the sale of heat at a set price of 26 EUR/MWh plus inflation over 20 years. “We agreed with our client on a heat price even before we put construction out to tender, so we took the risk for this first SHIP plant,” Susplugas said during his conference presentation. The agreed heat price is 20 % lower than the average price that the client used to pay for gas. The system has been competitive thanks to a grant by Ademe, France’s national energy agency. The subsidy, which covers 60 % of CAPEX, is equivalent to 20 EUR/MWh over 20 years. “This is a lot less than what you could have received for a PV system via the feed-in tariff in early 2006, when people were paid between 126 and 600 EUR/MWh,” he added.
Key figures on SHIP plant to be put up at Malteries Franco-Suisses in central France
Source: Kyotherm
Kyotherm cooperates with French-based company NewHeat, which designed the SHIP plant, is overseeing its installation and will be responsible for O&M after commissioning. Susplugas underlined how difficult it is to find one EPC contractor for the entire solar plant (EPC stands for Engineering, Procurement and Construction). Integrating the hydraulic components of the water-driven solar field into the air-powered malt drying system of the factory seemed particularly challenging. Consequently, Kyotherm signed technology supply contracts with four companies. One of them is Savosolar, based in Finland, which delivers the field, while Sunoptimo, based in Belgium, is responsible for the integration of the solar heat into the factory by using water-to-air heat exchangers. In addition, French-based Dalkia provides the heat delivery loop, Eiffage, also based in France, delivers the storage tank and NewHeat controls and monitors the system.

Commissioning of the installation is scheduled for May 2020, at which point the SHIP system will be the largest in Europe. The currently biggest one has 9,300 m² (6.5 MWth) and supplies heat to a flower farm in the Netherlands.
Organisations mentioned in this article:
www.kyotherm.com
http://newheat.fr/en/
https://savosolar.com/
https://www.sunoptimo.com/en
https://www.dalkia.fr/en
https://www.eiffage.com/en/home
News
Process Heat
Finance and Incentives
Chile
France
Finland
Belgium
IEA SHC Award
SHC 2019
ESCO
IEA SHC
Kyotherm
ADEME
New Heat
Malteries Franco-Suisses
Savosolar
Sunoptimo
Dalkia
Eiffage