Jordan is showing rapidly increasing demand for air-conditioning. Total annual emissions from cooling commercial buildings add up to 600,000 tonnes of CO2, an amount equal to emissions from about 120,000 passenger vehicles per year. This has prompted the German Agency for International Cooperation to initiate the project Solar Cooling in Industry and Commerce in Jordan. The German Technische Universität Berlin (TUB) played a key role in this transfer of technology and know-how for the planning and installation as well as monitoring of four solar-driven air-conditioning systems in public and private buildings. The photo shows the 388 m² collector field which was commissioned at Petra Guest House in February 2015, around the same time as the one at German Jordanian University.
Photo: GIZ
Two more systems followed in September 2016, at the Royal Cultural Center and the Irbid Chamber of Commerce. The four installations supply heat for space heating, domestic hot water and thermal-driven cooling systems. Depending on climate conditions, they have an annual demand of around 2,000 to 3,500 hours for heating and around 3,000 to 4,000 hours for cooling. The operators of the solar thermal air conditioning systems can switch manually between heating and cooling mode. During only very few days each year will both heating and cooling be required.
The plants were delivered and installed by Jordanian-based Millennium Energy Industries in cooperation with TUB. Their solar fields consist of vacuum tube collectors with CPC (compound parabolic concentrators) from German Ritter Group and all four solar cooling systems employ TUB-developed absorption chiller technology, which uses dry cooling towers and can be operated at high ambient air temperatures. The chillers have meanwhile been turned into a commercially available product by German-based Bälz & Sohn.
Key technical data of the four installations
Source: TUB
System monitoring at German Jordanian University and Petra Guest House started in February 2015. The one-stage absorption chiller at Petra Guest House has shown a daily thermal efficiency (coefficient of performance or COPth) between 0.6 and 0.7 (see the table below) and an average electrical efficiency (COPel) between 8 and 10. These are satisfying results considering how much of a challenge chiller operation has been: high ambient temperatures (>35 °C), low solar ones (< 70 °C) and a heavy partial load.
According to Christopher Paitazoglou, the project coordinator at TUB, due to the chillers operation outside the design point  adjustments on the pump speed would help to reduce the electricity consumption of the cooling system. The implementation of control strategies for variable volume flows could increase the potential for higher electrical efficiencies.
Results from the monitoring data of the two systems commissioned in 2015
Source: TUB
At a COPth of 0.4 to 0.6 and a COPel of between 2 and 4 (see table below), the 2015 monitoring results from the German Jordanian University show potential for improvement. According to Christopher Paitazoglou, Project Coordinator at TUB, the chiller operation outside design specifications could be assisted by pump speed adjustments to reduce the electricity demand of the cooling system. The implementation of control strategies for variable volume flows could increase electrical efficiencies. Additionally, system operation could be improved by adjusting the solar dry cooler, which has been designed to cool down the solar circuit at high temperatures above 100 °C. “The emergency dry cooler starts operation at a temperature level of 80 °C in the solar circuit, which results in low supply temperatures for solar hot water,” explained Paitazoglou (see the chart below). The existing collector field is expected to perform better after necessary maintenance has been carried out. 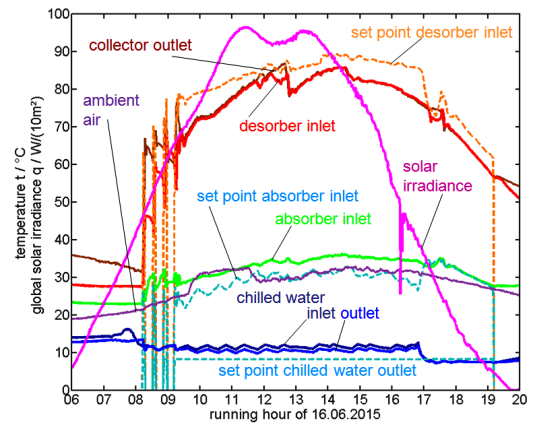 Monitoring results of German Jordanian University system from 16 June 2015 show the start of the solar dry cooler at 12.30 p.m., which leads to lower collector efficiency.
Source: TUB
The chart above shows a typical cooling day at German Jordanian University (data from June 2015). The ambient air temperature reaches 30 °C, whereas the cooling water temperature at the absorber inlet is up to 35 °C. The temperature at the desorber inlet of the chiller is rather low (60 – 80 °C) during daytime because of low collector efficiency and operation of the solar dry cooler. In the cooling hours between 9 a.m. and 5 p.m., the absorption chiller reduces the return temperature by 2 K in the evaporator, actively supporting the conventional cooling system. On the day shown in the chart, the absorption chiller provided a cooling capacity of up to 40 to 50 kW at a thermal efficiency of 0.55.
The project Solar Cooling in Industry and Commerce started in 2012 and will end in June 2017. It has been funded by the International Climate Initiative of the German Federal Ministry for the Environment, Nature Conservation, Building and Nuclear Safety.
Websites of organisations involved in the project:
Technische Universität Berlin (TUB): http://www.tu-berlin.de/menue/home/parameter/en/?no_cache=1
Millennium Energy Industries (MEI): www.meisolar.com
Bälz & Sohn: www.baelz.de
Ritter Group: http://www.ritter-gruppe.com/en/home.html
News
Solar Cooling
Awareness Raising
Jordan
Germany
Royal Cultural Center
Irbid Chamber of Commerce
GIZ
German Agency for International Cooperation
TUB
Petra Guest House
German Jordanian University
Millennium Energy Industries
Ritter Group
Bälz & Sohn
International Climate Initiative
BMUB