Substantial solar resources and a generous incentive scheme called Conto Termico 2.0: Perfect conditions, it seems, for the widespread use of solar district heating. But barriers such as a low gas price and the concentration of district heating in a small part of Italy have so far limited deployment to a few installed systems. The map shows the three existing SDH plants in Varese, Sansicario and Lodi (red circles). A fourth with a gross area of about 600 m² is expected to come online in 2020 to feed heat into Turin’s district network operated by the Iren Group utility (yellow cirle).
Source: Ambiente Italia
In all, three SDH plants are up and running in Northern Italy. The first one has a gross area of 990 m² and was set up in Varese, a city close to Milan, in 2015. It is run by Varese Risorse, a utility that is part of the large A2A group of companies. Solar output is primarily used to preheat the make-up water for the nearby district heating network. Previous articles on solarthermalworld.org described the technical and financial aspects of the system and reported on its good performance during the first year of operation. 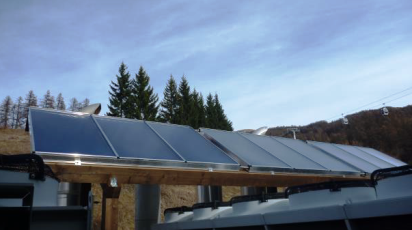 Flat plate collector section of the Sansicario SDH plant
Photo: Degmar
The second SDH system was installed in the village of Sansicario in the mountainous region of northern Italy. In 2016, it started feeding solar heat into a district heating network which mainly runs on gas-powered CHP units. This solar field was designed by engineering services company Degmar and consists of two different sections, one with flat plate and one with evacuated tube collectors (ETCs). Its total gross area is 63 m².
The reason for installing a mixed-collector system was to analyse the performance of both types in an existing district heating system. In the paper attached to this news article, the authors state: “The ETCs show better performance, with specific heat production up to 500 to 600 W/m² on an hourly basis and conversion efficiencies near the theoretical curve.” Only the monitoring data made it possible to resolve the issues with the flat plate collectors, and production “is now close to that of the ETC field.”
The district heating network generates 23,573 MWh of heat each year. Net production is at 21,120 MWh because of 10 % network losses. The 5-kilometer pipelines provide heat for around 350,000 m³ of building space in the residential and tourism sector. In winter, supply is at 95 °C and return at 65 °C. Three engines powered by natural gas provide about 86 % of total production at an overall power of 3.6 MWth. The remaining demand is met by auxiliary boilers, which have a combined capacity of 10.3 MWth. 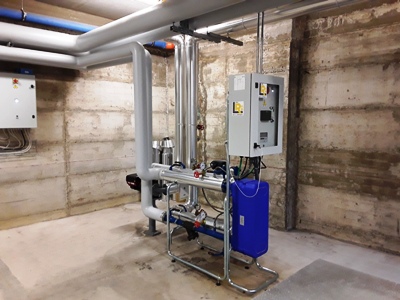 The connection between solar field and network return line
Photo: Linea Reti e Impianti
The third plant was installed on the roof of a swimming pool in Lodi near Milan. In 2017, it was connected to the local district heating network of utility Linea Reti e Impianti. The 200 m² collector field is operated by the owner of the sports facility, Sporting Lodi, and preheats the return line of the grid.
SDH still has tough barriers to overcome
Despite the favourable incentive environment for solar district heating, relevant barriers to faster deployment remain. First, the existing district heating capacity is restricted to the northern parts of Italy. A recently published study by GSE found that 78 % of district heating is concentrated in only three regions, namely Lombardy, Piedmont and Trentino-Alto Adige. An additional obstacle is the rather low gas price paid by utilities. Since they operate combined heat and power units, they are classified as electricity producers and are exempt from certain taxes. On top of this, there is a lack of awareness among utility operators and policymakers, and the number of specialised technology providers in the country is negligible. Other highly delicate issues are the visual impact of the collector field and competing land uses.
The article was written by Riccardo Battisti, a solar thermal consultant and market researcher working at Ambiente Italia (Rome, Italy).
Websites of organisations mentioned in this article:
Ambiente Italia: www.ambienteitalia.it
Varese Risorse: www.vareserisorse.it
A2A Group: www.a2a.eu
Degmar: www.degmar.it
Linea Reti e Impianti: www.linea-ri.it
LGH Group: www.lgh.it
IREN Group: www.gruppoiren.it
Conto Termico 2.0: www.gse.it/it/Conto%20Termico/Conto%20Termico%202.0/Pagine/default.aspx
SDHp2m project: http://solar-district-heating.eu/