Skip to main content
Sign up for newsletter
Follow us
Advanced search
The latest statistics of Conto Termico in Italy show that the national incentive scheme has still not been used enough: As of 1 January 2016, it had supported only 62 solar thermal plants for public buildings, while the private sector figure was 10,634. Assuming an average plant size of 7 m², as estimated by Gestore dei Servizi Energetici (GSE), this corresponds to a total subsidised collector area of 75,000 m² – a fairly low result over the 30 months of the scheme. The subsidy volume for solar thermal now amounts to about EUR 27.5 million, around half of the total incentives which have so far been distributed by Conto Termico. This is again a rather small figure compared to an originally planned budget of EUR 900 million. GSE, the state-owned administrator of Conto Termico, has therefore modified the scheme rules.
This revision, called Conto Termico 2.0 in this article, follows a public consultation process and includes several relevant changes for solar thermal. First of all, the eligible system size was extended from 1,000 to 2,500 m², with the hope to establish the market niche for large-scale applications like district heating.
Second, the incentive level is not only linked to plant area as it was in the previous version, but also to the expected yield of the solar collector, as stated in the second table of Solar Keymark certificates. Hence, only collectors with a Solar Keymark certification will be able to receive funding. The new requirements have not yet been available on the programme’s website, but were published as PDFs (see the attached documents) and distributed via qualenergia.it. 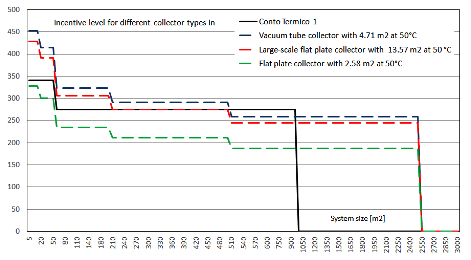 Figure 1: Incentive levels for different collector types based on the new rules of Conto Termico 2.0 compared to the ones of Conto Termico 1 (continuous black line)
Source: SDH Energy
With the help of Italian solar company SDH Energy, some calculations were performed using several different solar collectors, all of them available on the market, for several user applications in order to evaluate the incentive. The figure on the left shows the most common application: domestic hot water production referring to an average collector temperature of 50 °C. The coloured lines represent a typical vacuum tube collector (blue), a large-scale flat plate collector (red) and a normal-size flat plate collector (green). A small 5 m² system would receive incentives ranging from 340 to 450 EUR/m² in two annual instalments, totalling between EUR 1,700 and 2,250 for the entire system. The continuous black line compares the new figures to the old scheme rules of Conto Termico 1, under which the same systems would have received an incentive of EUR 1,700. Overall, the new regulations increase the incentive amount. Quite similar results can be calculated for combi systems, which produce hot water for both domestic use and space heating.
Only small increase for large commercial plants under Conto Termico 2.0
A 200 m² plant, for example, would profit from a grant of between 200 to 300 EUR/m², according to the SDH Energy calculations based on the three collectors with the highest performance. The incentive level of the previous scheme was at 275 EUR/m² regardless of the collector type, meaning the increase in this category is rather small.
Additionally, the new requirements mean that solar cooling plants will be worse off: A 300 m3 solar cooling system – again, with the three best performing collectors – receives a specific incentive of 220 and 330 EUR/m² under Conto Termico 2.0, reaching a total subsidy of EUR 66,000 to 99,000. This kind of system was granted 400 EUR/m² during the previous scheme.
What about solar district heating?
The incentive value for solar plants supporting district heating grids is still an ambitious one because the revised law does not specify if the yield should be calculated at a temperature of 50 or 70 °C. This means that the specific incentive for such a large system using high-quality collectors could be 169 EUR/m² or 255 EUR/m², depending on the interpretation of the law. Currently, market actors are waiting for an official clarification from the Ministry of Economic Development and from GSE.
A third new rule in the revised scheme results in an important quality assurance measure: Plants above 100 m² will now be obliged to include a metering system for the produced heat, although the measured yield will not be relevant for the incentive amount.
More information:
http://www.gse.it/it/Conto%20Termico/Pages/default.aspx
The text was written by Riccardo Battisti, solar thermal consultant and market researcher working at Ambiente Italia (Rome, Italy).