Piyush Goyal, Indian Minister of State for Power, Coal and New & Renewable Energy, awarded prizes to 102 institutions, companies and agencies for their achievements in high-temperature solar process heat and cooking. The photo shows the minister calling on the manufacturers to share their innovative ideas and make India a unique place for the demonstration of solar process heating technologies. The Concentrated Solar Technology Excellence Awards 2016 ceremony was organised by the Ministry of New and Renewable Energy (MNRE) in cooperation with the GEF-UNDP programme for concentrating solar thermal and took place in New Delhi on 29 April 2016. This was the first time in the history of India’s solar thermal industry that so many awards were presented at only one event. Additionally, 37 projects from all over the country received sanction letters for the MNRE capital subsidy and GEF-UNDP support scheme.
Photos: MNRE
The awardees were chosen among applicants from various different organisations, such as state agencies, associations, religious institutions, hotel businesses and industrial companies, and above all the manufacturers. The attached PDF shows the 15 categories in which applicants could earn CST awards. Whereas community cooking has become a popular application at both educational and religious organisations, CST technologies are being adapted to meet process heat requirements in the dairy, pharmaceuticals, chemical and textile industry (and many others). 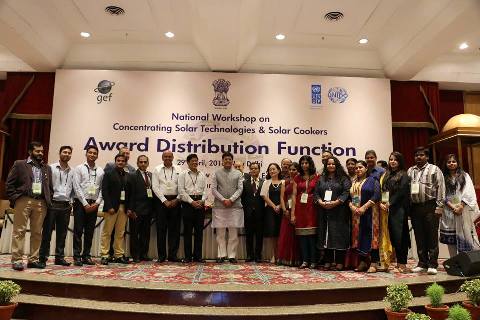 Team of industry facilitators from GEF, UNIDO and UNDP posing with energy minister Piyush Goyal
Goyal lauded the efforts of the national solar thermal industry to bring India up to the top countries globally. India is among the top 5 markets regarding newly installed solar capacity in low-temperature applications – like solar water heaters – and is the leader in high-temperature solar thermal cooking. The minister said that each individual project had a vital role to play in achieving the overall solar targets.
Recognising the efforts of solar water heater manufacturers, which are now self-sufficient after demanding the removal of subsidies in 2014, Goyal said that producers of high-temperature solar thermal systems all had the same potential of being self-sufficient, meaning that they were able to implement systems which were economically feasible without the investment grants still offered by MNRE and UNDP-GEF.
Solar concentrating systems to reduce fuel oil demand
MNRE Secretary Upendra Tripathy from the Indian Administrative Service said that India had over 482 high-temperature solar thermal installations totalling 53,000 m². He called on manufacturers to increase their efforts by a factor of eight over the next year and reduce India’s dependence on fuel oil from abroad.
Tripathy also mentioned that India had received a USD 1 billion line of credit from the Asian Development Bank and the German KfW banking group in order to advance the PV rooftop market and called on the industry associations to draft a proposal, so that the MNRE will be able to offer a similar credit line for the solar thermal industry and take care of the high capital costs.
The MNRE is implementing the CST technology scheme under the auspices of the National Solar Mission’s Off-grid and Decentralised Solar Thermal Application programme. The programme’s aim is to promote CST applications in the industrial sectors, at commercial establishments and other institutions, requiring heat in the range of 90 to 300 ˚C. The MNRE is also preparing a roadmap to have 100 MW of concentrated solar thermal power installed for electricity production by 2022.
The GEF-UNDP programme target 45,000 m² of high-temperature solar thermal systems over five years by March 2017 and the GEF-UNIDO programme targets another 45,000 m² which ends in March 2020.
Websites of projects and institutions mentioned in the article:
GEF-UNDP concentrated solar thermal programme: http://www.cshindia.in
Ministry of New and Renewable Energy (MNRE): http://www.mnre.gov.in/
UNIDO: www.unido.org
This text was written by Jaideep Malaviya, an expert in solar thermal based in India (malaviya@solrico.com).