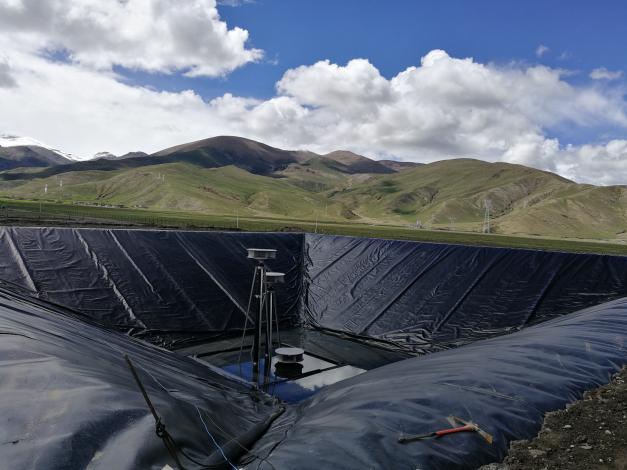 Denmark’s cost-effective, tried-and-true seasonal pit heat storage concept needs to be modified if it is to be implemented across Europe, since district heat temperatures are higher and groundwater may be only 5 to 15 metres from the surface. The members of research platform Task 55 (Towards the Integration of Large Solar Systems into District Heating and Cooling Networks) have therefore created alternative designs and tested improved liners for use in pit heat storage ranging from 100,000 to 2 million m3. In addition, they have estimated how much money can be saved thanks to those changes. The researcher’s findings will soon be published in a report and on a factsheet, titled Solar DH – network hydraulics and supply points. Both will be available for download from the IEA SHC Task 55 website: https://task55.iea-shc.org. The photo shows a pit heat storage system being constructed in Tibet, China, with a watertight liner covering the bottom.
Photo: Arcon-Sunmark Large-Scale Solar Systems Integration
“The great collaboration between industry and research institutes has taken the technology behind the liners to a new level,” said Wim van Helden, of Austrian research institute AEE INTEC. He leads the giga_TES project, which is to contribute to the planned Task 55 publications. The project’s title is short for thermal energy storage (TES) with huge volumes of up to 2 million m3 – the size of the Ernst Happel Stadium in Austria’s capital Vienna.
A liner is a strong polymer film that is 2 to 3 mm thick and seals the pit storage volume against the surrounding soil. The storage systems in Denmark use liners made of polyethylene, as the water contained in the pits does not exceed 85 °C throughout the year.
“The giga-size storage systems that are planned to be built in the Austrian cities of Vienna and Salzburg require a steady temperature of 95 °C at the top, so PE liners would have an estimated service life of 10 years,” said van Helden. Consequently, Austria-based Johannes Kepler University (JKU) and Agru Kunststofftechnik developed a new generation of liners based on polypropylene (PP) and stabilisers. An accelerated aging test carried out by JKU in Linz has indicated that these PP liners will last significantly longer, that is, up to 30 years, when subjected to a temperature of 95 °C.
Optimised designs with embankment and vertical walls
Danish pit thermal energy storage systems have embankments around the edges to dump the soil from the pit and to keep the basin above groundwater. The surrounding walls are at an angle to prevent soil from sliding down, and a floating insulation covers the basin (see fig. 1). 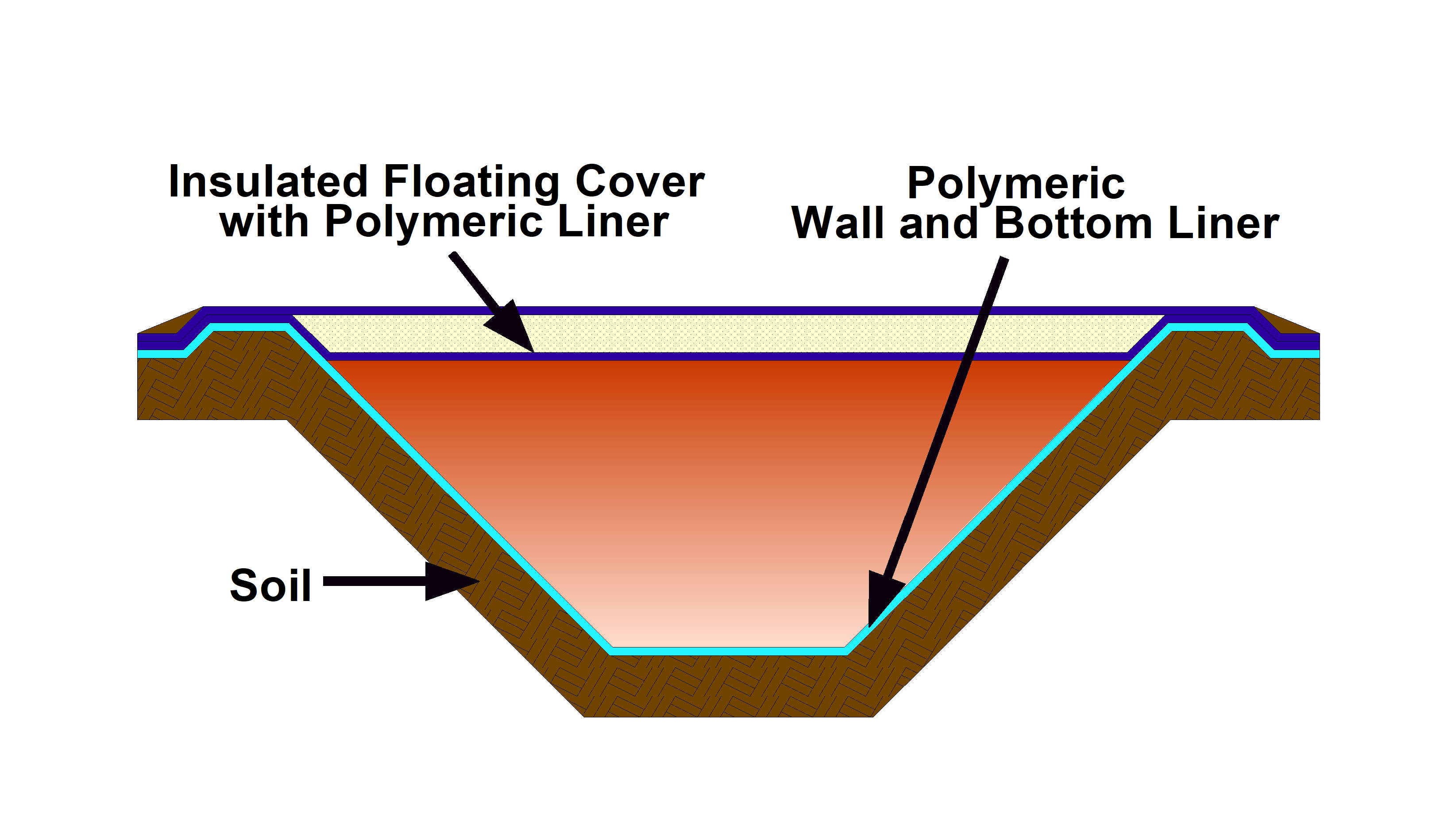 Figure 1: Typical Danish PTES design
Chart: AEE INTEC
“If you want to use the Danish pit storage design in Austria, you face a number of challenges,” said van Helden. “The giga-size pits are usually next to densely populated cities, where space is expensive and groundwater is barely below the surface.” Hence, the giga_TES team designed a cylindrically shaped storage volume with vertical walls that has a smaller area to cover (see fig. 2) than its Danish counterpart. This also cuts costs, since the cover is the most expensive element of pit thermal energy storage, accounting for two-thirds of the total investment, as indicated by a techno-economic study of the University of Innsbruck (UIBK), Austria (see fig. 3).
The giga_TES design adds a number of features to the basic Danish concept:

Figure 2: Giga_TES pit heat storage is suitable for sites where groundwater lies just barely below the surface Source: ste.p ZT
Cost comparison of different pit heat storage designs
In addition, the researchers wanted to know how the stricter requirements of the giga_TES design affect costs (see fig. 3). According to calculations by UIBK, Danish pit thermal energy storage can be built at specific costs of 20 EUR/m3 to 40 EUR/m3, a range confirmed by Danish consultancy PlanEnergi’s assessment of existing pit-type storage tanks. For example, from 2014 to 2015, a 210,000 m³ pit heat storage system was built in Vojens for 24 EUR/m³ of storage capacity.
Using the same methodology, UIBK has estimated that giga_TES storage designs will be three times as expensive and range from 60 EUR/m3 to 120 EUR/m3. In partnership with Austrian construction firm PORR, the university continues to improve building materials, methods and designs, in an effort to cut costs further. And yet, its research team also underlined that these sorts of huge infrastructure projects will be feasible only if they are supported by a stable policy framework. 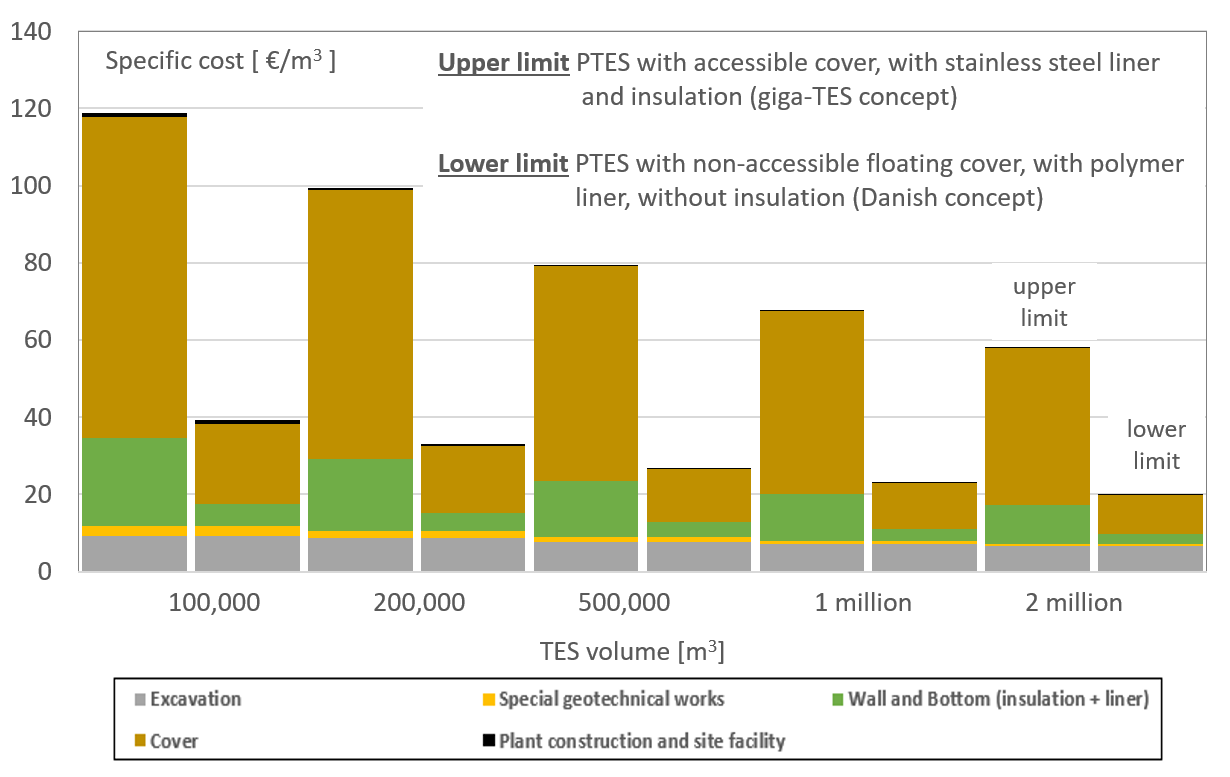