In late May, the IEA Solar Heating and Cooling Programme (IEA SHC) published its annual report titled Solar Heat Worldwide (see the attached document). It is the most comprehensive study of solar heating and cooling markets around the globe and has been referenced by international organisations such as REN21 and IRENA. Based on data from 66 countries, the most recent report has grown from 76 pages in 2016 to 86 in 2017. It includes a new section which highlights last years’ encouraging market development of megawatt systems for solar district heating and solar process heat and a second part providing in-depth figures about the national and global markets of 2015.
“Large-scale solar thermal systems to support district heating plants and industrial applications have gained increasing interest all over the world in recent years. Several ambitious projects have been implemented successfully,” said Ken Guthrie, Chair of the IEA SHC Programme.
The number of large collector plants (>350 kWth = 500 m²) which went online in 2016 stood at 37, a remarkable jump from the 20 systems installed the year before. A new world record was set in December 2016, when the 110 MWth plant connected to the district heating network of Silkeborg, Denmark, was put into operation. Globally, systems in the megawatt range have remained a niche market, but show huge potential. By the end of 2016, the number of large solar thermal installations in operation in Europe was at 300 connected to district heating and 18 to cooling networks. Their capacity added up to 1.15 GWth, a mere 0.3 % of the world’s total.

Annual growth rates by economic region. Sub-Sahara Africa includes the following countries: Botswana, Burkina Faso, Ghana, Lesotho, Mauritius, Mozam bique, Namibia, Nigeria, Senegal, South Africa, Zimbabwe; Asia without China: India, Japan, Korea South, Taiwan, Thailand; Latin America: Barbados, Brazil, Chile, Mexico, Uruguay; Europe: EU 28, Albania, Macedonia, Norway, Russia, Switzerland, Turkey; MENA region: Israel, Lebanon, Palestinian Territories, Tunisia
Source: Solar Heat Worldwide 2017
The table above shows that the world market went from 14.3 % growth in 2010/2011 to a 13.9 % decline in 2014/2015. The chart also makes clear that the country based on which global trends rise and fall is China, which was again the largest market by far in 2015 (30.5 GWth), contributing 76 % of the total collector area added that year around the world (40.2 GWth).
Large established markets in particular have been under pressure from falling demand in their residential segment, long regarded as the core sales market of the solar thermal industry, and increasing competition from heat pumps and PV systems. As a result, several key countries have suffered a decrease in sales in 2015, for example, China (-17 %), Germany (-9.7 %), Spain (-6 %) and Italy (-15 %). Markets in Europe stabilised in 2014/2015 because of significant growth (+10 %) in Turkey, which is part of the region geographically.
Other markets reporting growth in 2015 were Mexico (+8 %), Denmark (+41 %) and Israel (+9 %) and countries in Asia, such as India (+32 %) and Taiwan (+10 %).
Market shifts from residential to commercial water heating 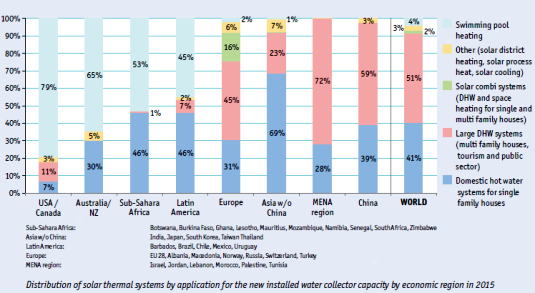 Solar thermal systems broken down by application of newly installed water collector capacity and by economic region in 2015
Source: Solar Heat Worldwide 2017
The decline in sales of domestic hot water systems for single-family buildings has been a global phenomenon. This type of system made up 63 % of the total capacity in operation at the end of 2015, but accounted for only 41 % of new installations in that year. “What is remarkable, however, is that for the first time in 2015, every second collector worldwide was installed in solar water heating systems for multi-family property, in tourism and the public sector,” said Guthrie (see chart above).
Key global indicators of solar heating and cooling market
Source: Solar Heat Worldwide 2017
1 Includes unglazed and glazed flat plate and evacuated tube collectors with water as the energy carrier, as well as glazed and unglazed air collectors
2 Includes glazed and unglazed water collectors
IEA SHC is an international research and information platform for solar heating and cooling technologies. It is used by over 200 experts from 21 countries and five organisations to conduct collaborative research on a wide range of topics, from the urban planning of green quarters to future storage tank designs and the integration of large solar fields into district heating and cooling networks. Founded in 1977, SHC is one of the IEA’s oldest Technology Collaboration Programmes and one of ten in the field of renewable energies.
More information on IEA SHC:
www.iea-shc.org